If human civilization is to make the move to a steady state economy that provides prosperity without growth, it must meet people’s basic mobility needs without reliance on fossil fuels. The U.S. requires a revolutionary transformation of its transportation systems, and recent experience with the downsides of oil provides a potent political push to overcome inertia. 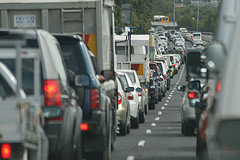 In the United States, the transportation sector consumes about 60% of the oil and is responsible for about one-third of greenhouse gas emissions. We use more gasoline than the next 20 nations combined. America has 2.6 million miles of paved roads with 3 cars for every 4 people in the country, and 88% of people get to work via automobile.

Concerns about global climate destabilization and dramatic water pollution have put the issue of oil usage front and center. The world has focused on the tragedy of the gigantic BP oil spill in the Gulf of Mexico that began on April 20. But numerous other spills, leakages, and pipeline breaks have occurred since April. For example, the Enbridge pipeline ruptured the last week in July and spilled over one million gallons of oil into the Kalamazoo River in Michigan. As with BP, this recent spill was not a unique mishap but rather one in a long series of accidents and violations in Enbridge’s history.

Over the past decade, there have been over 1,600 accidents with oil pipelines in the U.S. The year 2010 is not extraordinary for its mishaps, but merely business as usual in the oil industry. It is naïve to think that Congress or state legislative bodies can tighten regulatory and enforcement regimes to solve the problem. Friends of the Earth and other environmental groups have tried this route, but oil is inherently dirty. In addition, the oil industry is politically powerful, and well-intentioned protections often fail to curtail the massive amounts of leakage and spillage in the U.S. and around the word.

To achieve optimal economic scale and a true balance with nature in a steady state economy (i.e., healthy ecosystems and a healthy economy), boldness is required, and the transportation sector is a good place to start. Ending the use of oil to power vehicles, from planes to trains to automobiles, is a must. But the power of the highway lobby and the momentum of the global jet-setting economy’s demands make this objective appear improbable.

Some encouraging signs of change, however, provide the basis for making big demands on Congress, state legislatures, and the executive branch. For example, public support for spending the preponderance of federal transportation dollars on road construction (instead of public transportation) may be cracking significantly. On July 25th the Chicago Tribune reported that for the first time, both suburban and urban citizens in the Chicago metro area think that more money ought to be spent on transit than on highways.

Recent economic analyses highlight the costliness of oil and automobile usage, and evidence from these analyses can drive big shifts in policy. For instance, the U.K. Department of Transport has found that for each British pound spent to reduce car usage, there are £10 of benefits in the economy from fuel savings, reduced congestion costs, and lower pollution levels.

But America lags far behind other nations in rethinking transportation systems – a quick comparison of Atlanta to Amsterdam demonstrates the gap. In Atlanta 95% of residents commute to work by car. In Amsterdam 40% commute by car, 35% bike or walk, and 25% go by transit. The series of oil spills in the U.S. this year should energize efforts in city after city to revamp transportation and breathe new life into automobile alternatives.

My brother Brion Blackwelder, who is a law professor at Nova Southeastern University in Fort Lauderdale, Florida, suggests several standards that a modern 21st century transportation system should meet:

1. Zero tolerance for death and injury;

2. Congestion as a rarity rather than a daily occurrence;

3. Small footprint in terms of land use, energy use, air and water pollution, and wildlife impacts;

4. Provision of services for the young, the old, the disabled, and the poor. 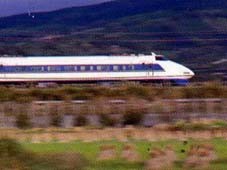 Not surprisingly, the United States flunks the test of meeting these standards. Take, for example, the first. Highway accidents each year in the U.S. claim the lives of about 40,000 people, and several hundred thousand more are seriously injured. Contrast this tragic record with Japan’s bullet trains. The speedy 322-mile route from Tokyo to Osaka, completed in 1964, has not had a single passenger fatality. Today 1,360 miles of high-speed rail link all of Japan’s cities.

One way to confront the challenge posed by these standards would be to shift to mostly electric vehicles. Cars and trains could be run on electricity generated by wind, solar, and other renewable sources. For part of the 20th century, the Milwaukee Railroad operated 650 miles of electric rail over five Pacific Northwest mountain ranges on its Chicago to Seattle route.

It may come as a surprise that 100 years ago Henry Ford and Thomas Edison were so dissatisfied with the internal combustion engine that they were developing and selling all-electric cars from 1910 to 1914, when a mysterious fire burned almost all of Edison’s laboratories in December of 1914.

Now is the time to rekindle that vision, capitalize on the public’s awareness of the dirty consequences that consistently accompany our oil usage, reinforce the growing sentiment to invest in public transportation, and begin serious debate on a sustainable transportation system.