President Obama triumphantly entered office with the popular promise of moving the United States to a cleaner energy basis, but his actions to date, along with those of the Congress, have promoted two types of dangerous energy developments: off-shore oil drilling and nuclear reactors. Nuclear expert Harvey Wasserman highlighted the dual dangers by noting, “As BP’s ghastly gusher assaults the Gulf of Mexico, a tornado has forced a shutdown of the Fermi 2 atomic reactor at the site of a 1966 melt-down that nearly irradiated the entire Great Lakes Region.”

These two recent events bring the reality of energy subsidies, especially in the form of liability limits, sharply into focus. The public should be suspicious of gigantic energy projects like deepwater oil drilling and nuclear reactors that are labeled “safe,” but enjoy liability protections from the extraordinary damages they can cause.

In contrast, projects to reduce energy waste or to generate electricity from solar or wind farms do not require special financial protection from huge disasters that spiral out of control. We don’t have to worry about a leak of solar or wind energy into the water or on the land. If a few solar panels or wind turbines fail, there is no widespread ecological catastrophe.

Everyone ought to pose a question to U.S. Energy Secretary Steven Chu and White House Climate Czar Carol Browner: do you have a credible plan to respond to a disaster at a nuclear reactor that is superior to what we have seen at the BP spill in the Gulf? Secretary of Interior Ken Salazar should be asked why, after promising at his swearing-in ceremony to bring integrity back to the department, he did nothing but grant permit after permit and exemption after exemption for offshore oil drilling?

It is important to raise these issues with the Obama Administration because this month it is proceeding to promote and request money for more nuclear reactors, including several right on the Gulf Coast. Another would be only 50 miles from Washington, DC on the shores of Chesapeake Bay. The Nuclear Regulatory Commission has warned that at least one new design proposed for federal funding cannot withstand tornadoes, earthquakes, or hurricanes.

A sustainable economy – a steady state economy with stabilized throughput – needs to be powered by reliable energy resources that do not wreak havoc with our security or our ecosystems. In a steady state economy, taxpayers would not be given the role of ultimate underwriters for energy debacles. Today the situation of government subsidization of dirty and risky energy is epitomized by the U.S. tax code, which has rewarded pollution and waste for over a century. Other ongoing government subsidies such as loan guarantees, tax write-offs, and miscellaneous appropriations are counterproductive, preventing the transition to a prosperous steady state economy.

The Obama Administration is perpetuating the worst in dirty energy and neglecting basic economic principles that ought to apply to all energy projects. The energy that runs most of the global economy today has externalized its health and environmental costs onto the public. Coal mining by mountain-top removal in West Virginia and oil extraction from tar sands in Canada provide two stark examples of poor economic practices – practices that President Obama could alter to develop the clean energy future he promised. 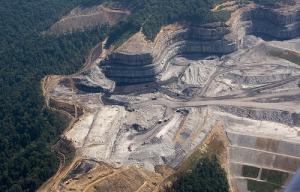 The legacy of mountain-top removal in West Virginia consists of wrecked watersheds, contaminated groundwater, valleys and streams filled with millions of tons of rock waste, and obliterated deciduous forests – damages that will never be paid for by the coal industry. An all-out military assault on these biologically diverse mountains could not produce a more comprehensive destruction than is now taking place. Reclamation is the equivalent of putting lipstick on a corpse.

Oil extracted from tar sands in Alberta, Canada is coming into the United States, and new pipelines are being proposed to transport it. Yet a net energy analysis of tar sands oil shows that you have to spend the equivalent of 5 gallons of oil to steam one gallon of oil out of the tar sands. An energy-efficient Toyota Prius using tar sands oil would thus be getting worse fuel mileage than a big SUV or Hummer. Left behind are poisoned water and soils and a huge reservoir of toxic waste that could burst forth and further pummel a compromised landscape.

These two sources of energy can only be brought to market because of hidden subsidies and incredible externalization of costs. The external costs should be internalized – virtually every economist agrees that such externalized costs are the result of a “market failure.” President Obama could also take direct action, for example, by refusing to grant a permit for a new U.S. pipeline to transmit the tar sands oil. (Visit Friends of the Earth for more information).

Energy accidents keep happening. In December of 2008 a Tennessee Valley Authority waste reservoir that was holding contaminated ash from its coal power plant burst, releasing over a billion gallons of toxic sludge into the Tennessee River Basin. This TVA disaster was 100 times larger than the Exxon Valdez spill in Alaska, which dumped 10.9 million gallons of crude oil into Prince William Sound. Each year coal preparation creates waste containing an estimated 13 tons of mercury, 3,236 tons of arsenic, 189 tons of beryllium, 251 tons of cadmium, 2,754 tons of nickel, and 1,098 tons of selenium. And the toxic ash from coal burning is frequently held in reservoirs susceptible to dam failure.

The coal industry and TVA said this unfortunate accident would not happen again, but not even a month later in January 2009, another coal waste reservoir in Alabama failed and spilled its contaminants onto the land and water.

These allegedly “cheap” sources of energy could not survive if their prices reflected their true ecological costs. Market failures need to be corrected so that oil platform failures and dam failures can be eliminated. In a steady state economy no energy source would be permitted to externalize all of its health and ecosystem impacts.

The Hurricane Effect (Part 2) Presuppositions of Policy
Scroll to top
$