Debt: Why Canada’s ‘strong economic fundamentals’ could yet blow over

A hurricane is a dynamic system. Heat, air and water create pocket thunderstorms that come together and gather strength in a powerful spiral effect, destroying whatever isn’t prepared for it on land. There’s a similar hurricane gathering strength in the global economy, as a self-reinforcing spiral of debt, money and materials hurls toward us, with most of us obliviously lying on the beach in our bathing suits and shades, assuming the calm weather will last indefinitely.

Read part one of The Hurricane Effect.

Last week, Canada’s Prime Minister, Stephen Harper, won an international tug-of-war against European proponents of a global bank tax – a tax which would have provided ‘insurance’ against any future crisis threatening collapse of the global financial system. Canadian officials have been globe-trotting to flaunt Canada’s exemplary standards and ‘strong economic fundamentals’ ever since the crisis broke. Due to what The Economist called a combination of ‘good policies’ and ‘good fortune’, Canadian banks didn’t go bust; in fact, they barely blinked. Why should Canadians be punished for good behavior?

While diligence is surely cause for celebration, dumb luck is cause for concern. Few representatives of either side in this international tug-of-war recognize that all industrialized nations – including Canada – share an unstable common denominator which requires urgent reform: a fiat-money system which not only fuels but requires stratospheric and perpetually rising consumer debt. As long as reforms are not undertaken to significantly change the system, huge debt loads will hold us hostage to unstable growth.

In the short term, a perpetually growing debt-load is financially unstable because it makes us vulnerable to shocks, including a rise in interest rates.  But more importantly, the practice is ecologically unstable because it prevents economic contraction to a sustainable size. Debt is what binds this hurricane of money and materials together as it spirals out-of-control.

The vicious debt-income-throughput cycle in Canada

The average Canadian is poorer than ever in real dollar terms because consumer debt accumulation has actually overtaken income growth to reach its highest proportion in history. Today, for every $1 earned, the average Canadian owes $1.47. The majority of Canadian consumer debt is accounted for in mortgages (70%), and home values in Canada actually continued their stunning rise throughout the international crisis. This growing bubble isn’t extraordinary in international terms – average Canadians are among the most heavily indebted in the world – and that’s precisely why Canada’s ‘strong economic fundamentals’ could blow over, particularly as the debt bubble tries to burst again.

The reason we’re indebted isn’t just because we want to be. The way the system is set up, once we’re indebted we’re pretty much there for life – especially if we are young home owners. Canadians, like most other rich-world consumers, have no option but to pay for large purchases with credit. Income, in today’s world, is simply a means to keep pace with debt.

So in addition to exploring the correlation between changes in income and material throughput – as we saw last time – I also cross-referenced the trends with debt.  Sure enough, the lines look similarly close… 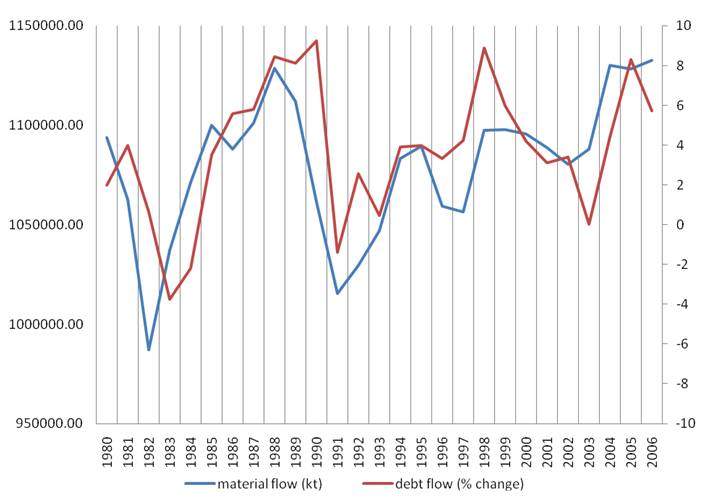 Of course, growth is theoretically innocuous if you can achieve a ‘decoupling’ of money and materials. But as we considered last week, income and throughput are tightly coupled in Canada – in spite of the fact that it fits the characteristics of a ‘post industrial’ economy, with roughly three quarters of the population working in the service sector.

As Herman Daly and others have proposed, growth is fuelled by our need to keep up with compound interest of big payments like mortgages. This makes us work harder and consume more just to keep pace with debt payments. Richard Douthwaite explains,

If someone borrows $10,000 at 10 per cent interest, there are only two ways in which they can find the extra $1,000 they will owe twelve months later. One is by taking the money out of their salary or savings – in other words, impoverishing themselves. The other is by investing in some business enterprise that will give at least a 10 per cent return so that they can pay the interest from its profits.

In Canada, growth means more oil production and pricier real estate; pricier real estate means more debt for home purchasers; more debt accrued by home purchasers means less disposable income, further impoverishing us beyond the ratio of $1.47 for every dollar earned as real incomes decline.  Taken together, these features of the economy force us to work more to pay off the debt.

Anybody want to take bets on how far we can push the limit?

Any way you slice it, the amassing debt has negative implications for our wellbeing. In the short term, we are sprinting on a futile treadmill of production that makes us more vulnerable to economic ‘shocks’.  How so? Most Canadians have very little equity in their homes – they use them more often as a source of equity loans just to consume, spend, or even keep up with payments. As a result, many Canadians are only one payment away from bankruptcy. So far this century, bankruptcy rates have been identical to mortgage arrears in Canada (CGA). If interest rates were to go up as a result of another international crisis, a stunning and requisite rise in home values and debt would give way to a stunning and unanticipated rise in defaults and bankruptcies – just as we saw in the US market.

Over the long term, this trend quickly accelerates large-scale environmental problems associated with ever higher throughput and increases the risk that we will face more perceptible limits to growth, which would also lead to economic contraction – but of a more permanent kind.

The highly dubious ‘post industrial’ economy is built on debt. As we examined previously, it’s also balanced atop a stubbornly lopsided resource-based trophic pyramid. The practice requires exponentially rising home values, counts this rise as positive GDP-growth, encourages spending money on material stuff faster than it’s earned, and then it commands us to repeat this inherently unstable practice until either the financial system or the economy collapses under catastrophic strain.

On their own, the heat, air and water which make up a hurricane are pretty innocuous things. And depending on who you ask, economists might argue that debt, money and throughput are, too.  But if we take our shades off, we’ll see the hurricane coming. I hope we’ll take the opportunity to do something about it.

The Economist: The least-bad rich-world economy. The charms of Canada: good policies, good behaviour and good fortune: if only others could be as lucky.

James Johnston has a MPhil in Land Economy from Cambridge University.