[Wouldn’t it be great to get advice directly from Herman Daly? It’s no surprise that his speech to graduating public policy students contains wisdom for all of us.] 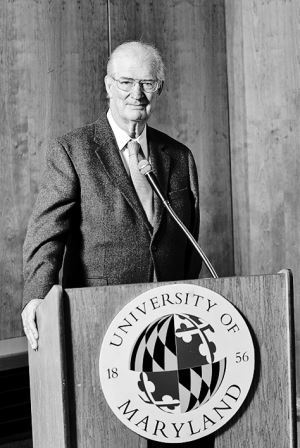 Herman Daly, professor emeritus. (Used with permission from the author.)

As you graduate I want to remind you of something you already know. Since you have not only chosen to study public policy, but have persevered to graduate with a Master’s degree, you must already have rejected the perennial and pernicious philosophical doctrines of determinism and nihilism. That is what I want to remind you of.

Determinists believe that there is only one possible future, rigidly determined either by atoms in motion, selfish genes, dialectical materialism, toilet training, or the puppet strings of a predestining deity. If there is only one possible future state of the world then there are no options, nothing to choose from, and therefore no need for policy—or schools of public policy or Master’s degrees in public policy. You should head straight to the unemployment office! You are necessarily non-determinists who must believe that there are at least a few possible alternative future states of the world, and that purposive policy can be causative in choosing among them.

Of course there are also many merely conceivable or imaginary futures that really can be ruled out as impossible—such as, for example, growing the economy forever on a finite planet that is subject to the laws of thermodynamics and ecological interdependence. Our commitment to the fantasy of unlimited growth as the foundation of all national policy should top the list of things to be reconsidered. But that is a story for another time. My point for today is that after eliminating all impossible futures we are still left with more than one possible future.

To choose from the remaining menu of possible futures we need a criterion of value by which to distinguish better from worse states of the world. Nihilists, or extreme relativists, deny the existence of any such criterion. For them it is all a matter of subjective individual preferences, suitably weighted by ability to pay, as modified by gender, race, and class interests. The nihilists say that there is no such thing as the common good or objective value, and that therefore we cannot distinguish better from worse future states. So even though real alternatives may exist, policy still would make no sense without an objective criterion of value, and some vision of the common good.

Without choice there can be no responsibility, so the determinists and nihilists are often undeservedly comfortable in their irresponsible irrelevance. “Never knowing where they are going, they can never go astray.” As future policy makers I am sure that you will have to confront some complacent determinists and nihilists, perhaps disguised as political pollsters, apocalyptic televangelists, cost-benefit analysts, bio-ethicists, evolutionary neuropsychologists, or growth economists. One way or another they will insist that there is no alternative, and even if there were, it would not matter. That such people should bother to argue publicly about anything already involves them in a logical contradiction to which they are evidently blind. That makes rational dialog with them unpromising. But, as I said earlier, this is something you must already know or you would not be here. I am just reminding you of it on your way out, like your mother telling you not to forget your umbrella.