by Robert A. Herendeen

… appealing to people to restrain themselves [by] self-enforced abstinence alone is a waste of time. By and large, we consume as much as our incomes allow…. changes… cannot take place without constraints that apply to everyone rather than everyone else. Manmade global warming cannot be restrained unless we persuade the government to force us to change the way we live.

The results indicate that the likelihood of paying a positive amount for supporting renewable energy is higher under a mandatory scheme compared to a voluntary payment option in the UK.

I believe what Monbiot says is true. And Akcura (who knew?) provides research-based confirmation.

I envision fulfilling, challenging, joyful lives within environmental constraints, but I can’t imagine that happening without societal signals to reinforce consistent behavior. If level of consumption is a problem, then scarcity is a necessary part of the solution. In the least disruptive and potentially fairest sense, this means using prices to determine demand. To cut to the conclusion: my favorite example is a carbon tax.

Monbiot’s statement is frightening, Draconian, and an apparent non-starter politically… almost. But the consequence of denying it leads to several futile proposals and viewpoints which permeate the literature, both scholarly and public. They are futile because they do not produce results that are big enough and fast enough to beat back anthropogenic climate change. Hearing them repeatedly frustrates me. These are:

The human beings that I observe, work and live with, and love, largely don’t fit these principles. This includes me. We need help. So, about these points: 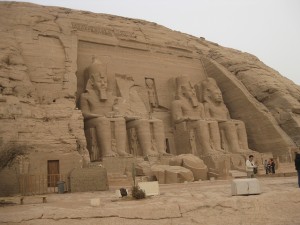 The Temple to Ramesses II at Abu Simbel (II). (Credit: Institute for the Study of the Ancient World)

Most of us don’t know or care what GDP is. However, we do have explicit or implicit desires for material/experiential growth at the personal or familial level. Such as: a larger house, a vacation cottage, a new car, a foreign eco-tour, increased travel to visit the grandkids, a secure college fund or retirement package, some new clothes—probably before the old ones wear out. Sum these aspirations over the population and you have pressure for overall growth.

Recently I asked who in my circle at the edge of academia in a progressive college town wants zero personal or professional economic growth. Not soon-to-graduate students looking for the first job. Not immigrants who arrive with almost nothing. Not newlyweds considering starting a family. Not academics building research programs or pursuing tenure. Not college presidents. Not development officers of green non-profit organizations. Not the mayor or city council. And of course not the usual suspects in the business community. I finally concluded that some well-off retirees seem to want zero growth….that’s about it.

Watch a TV auto ad and it’s difficult not to suspect—and resent—advertising’s role in fanning the flames of demand. (Mmmmm, a lone car on an otherwise unoccupied road accelerating against the shriek of the engine and the announcer’s deep n’ throaty voice…). But what advertising seduced Pharaoh Ramesses II into carving four 65-foot-tall likenesses of himself from native rock at Abu Simbel ca. 1250 BC? Or the government of Dubai into erecting the 2,722 foot (i.e, 0.52 mile) Burj Khalifa Tower in 2009 AD? I believe essentially all of us are hard-wired to want more of something for some reason. If there is good evidence that advertising is the culprit in overall consumption growth and not just in choosing between spending options, let’s see it.

Given the three-millennia separation of the two above construction projects, I think it is wishful thinking to expect Homo sapiens to spontaneously embrace zero growth collectively any time soon.

But even if 99+% of us do that, what about the non-cooperators? To the extent that the world is zero-sum (a politically incorrect but applicable description if there really are limits), it takes only a few competitively acquisitive individuals to produce a mess. If the few want more, sooner or later they will destabilize a group of otherwise modest, cooperative individuals. Envy kicks in, or defensive measures to avoid losing. An example of the latter: What to do when the tax bill on your modest abode skyrockets when Ringo Starr and Mick Jagger move in next door (aka the “Aspen effect”)? Try to maintain your modest lifestyle and move 40 miles downriver, or do what it takes to get into the high production/consumption game yourself?

All this brings me back to Monbiot’s bald and bold statement: there is negligible action without effective, broadly felt, implementable…scarcity. In other words, “appropriate scarcity” is not optional; it is necessary. Yes, increasing the price of “bads” is a frequent theme on these pages, but often only as one item in a longish list of principles based on Herman Daly’s powerful writings. Rather, it should be at the top of the list.

There is no question that accomplishing scarcity (for fossil energy, say) by caps and/or taxes is politically, socially, economically, and humanly difficult—a global top-ten red flag. I believe that at the U. S. national level at least, it is feasible. Equity impacts can be minimized by income tax rebates to lower-income households. Other impacts, especially regional, are tougher. In general, moving slowly reduces disruption, but we have scant time. What I hope for is national-level appropriate scarcity of fossil fuels. Done right (a daunting task, to be sure), we can reinforce our own behavior in doing what we (say we) must do to restrain global warming, and have good lives doing it.

Robert Herendeen is a fellow at the Gund Institute for Ecological Economics at the University of Vermont. His research interests include energy consumption, quantitative analysis of environmental issues, and environmental bookkeeping. He is a physicist who conducts economic input-output analyses to determine resource requirements and other impacts of consumption, following the parallels between economic and ecological systems and analysis of perturbed ecosystems. His most recent work covers the connection between net energy and the price of all consumer products.