When industrial civilisation collapsed in the third decade of the 21st century, a community living on a small island in the South Pacific Ocean found itself permanently isolated from the rest of the world. With no option but to build a self-sufficient economy with very limited energy supplies, this community set about creating a simpler way of life that could flourish into the deep future. Determined above all else to transcend the materialistic values of the Old World, they made a commitment to live materially simple lives, convinced that this was the surest path to genuine freedom, peace, and sustainable prosperity. Seven decades later, in the year 2099, a narrator emerges to describe the results of this remarkable living experiment. That is the premise of my new book, Entropia: Life Beyond Industrial Civilisation, and I’d like to briefly address the question: why did I write it?

In recent decades, much has been written in criticism of growth-based economics, and ecological economists have been leading the way in developing the most coherent alternative model — the steady state economy. However, with very few exceptions, little has been written on what daily life would actually be like in an ecologically sustainable economy. This makes it difficult to envision the alternative society that a steady state economy implies, and this is problematic, I feel, because if people cannot picture the alternative society, it is very difficult to desire it. And if people do not desire it, no social or political movement will arise to bring it into existence. For this reason I attempted, in Entropia, to describe in detail what everyday life might be like in a steady state economy. How would we feed ourselves? What clothes would we wear? What forms of transport and technology would we use? How much and what types of energy would we require? And what material standard of living would we have if we were to successfully decarbonise the economy? Most importantly, perhaps, what would the quality of daily life be like? Those are some of the questions the narrator addresses as he documents the economy, culture, and politics of Entropia, in the aftermath of the industrial age. 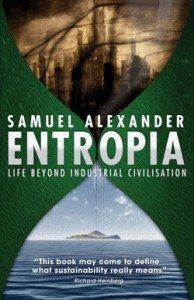 In answering those questions, the narrator highlights the point that sustainability proper, as opposed to greenwash, implies an extremely radical agenda for change. True sustainability is not merely about taking shorter showers, composting, and turning the lights off; nor is it about a carbon tax here, and a few wind turbines there. It requires a fundamental reorientation of the nature and purpose of economic activity. In particular, Entropia labours the point that a steady state economy must be based on lifestyles of material sufficiency, with the focus being on providing ‘enough, for everyone, forever,’ not universalising consumer affluence. Presently, the global economy is in gross ecological overshoot, while billions of people still live lives of material deprivation. To achieve sustainability in the overdeveloped world, the richest nations need to go through a process of planned economic contraction — or degrowth — on the path to a steady state economy. Technology will never be able to globalise consumer affluence, and the sooner we can introduce this point into public discourse, the sooner we can begin reimagining ‘the good life’ beyond consumer culture. A central theme of Entropia is that working toward sustainability in an age of converging crises, far from being a hardship, is actually an opportunity to rethink the nature of human progress. It suggests that the Great Transition needed will actually be in our interests, provided we work together and negotiate the changes wisely.

One criticism that may be levelled against the book is that it is set on small island and therefore lacks relevance to the rest of us, especially to those of us who live in dense urban or suburban contexts. Although I feel it would be a terrible misreading to take the book so literally, it is an objection that is worth anticipating. Of all literary genres, utopian writing is the genre that readers must always read metaphorically. Utopias are never about the society itself — utopia, of course, means ‘no place.’ Beneath the surface, utopias are always about the place that is not utopia — which is here and now. In writing Entropia it was certainly my intention to speak to our present situation, and this should be perfectly clear to all those who are prepared to read between the lines.

A second objection that may be worth anticipating is the objection that the genre of Entropia is confusing. To be honest, it probably is a confusing genre, because it is a book of fiction, and yet not a novel, as such. When people pick up a book of fiction, they tend to expect a novel, with all that implies, but I would rather call Entropia a fictional documentary, with a twist. When reading other works of eco-fiction, I generally felt disappointed with the author’s attempt to turn ideas into a narrative, and so I wanted to avoid that literary pitfall. Ecotopia, by Ernest Callenbach, for example, has many interesting and worthy ideas in it, but it tries to be a novel and, let’s face it, it is a terrible novel. In a similar vein, William Morris’s, News From Nowhere, which is the best in its genre, may well deserve its place in the history of ecological literature, but one can hardly deny that in many places Morris forces an essay into a narrative, without being able to disguise this clumsy literary technique. In my book, I was a bit more honest about the fact that what I wanted to do was describe a way of life, rather than tell a story. Again, Entropia is a fictional documentary not a novel, and should be read as such – not as entertainment (although I hope it entertains), but primarily as an attempt to enrich the conception of a steady state economy.

In all movements for change, including the movement for a steady state economy, it is important occasionally to hold up for examination what one understands to be the clearest expression of one’s highest hopes and ideals. That is what I have tried to do in Entropia, and that is how I would defend the inevitable charge of idealism. It is not that I think Entropia, as I describe it, will ever be achieved. It is just that unless we know where we want to end up, we can’t know in what direction we should be moving. My hope is that Entropia will provide some guidance on what it will actually take to transition to a steady state economy, as well as provide some deeper insight into what life might be like if we were ever to succeed.

Entropia was written by Dr Samuel Alexander, who is a lecturer with the Office for Environmental Programs, University of Melbourne, Australia. He teaches a course called ‘Consumerism and the Growth Paradigm: Interdisciplinary Perspectives’ in the Masters of Environment. He is also co-director of the Simplicity Institute and co-founder of Transition Coburg. He writes regularly at the Simplicity Collective and posts most of his academic essays at the Sufficiency Economy.

Why Stop at Massive Economic Growth when Infinite Growth Is within Reach?
1 reply

A Post-Growth Economy in France?