Writing a book is like going on a journey. You explore the terrain, make discoveries, meet interesting people, and maybe learn new languages. The longer the book-writing, the longer the journey.

Supply Shock was a long journey; here is a short travelogue.

I set out in the fall of 2000 to explore the world of environmental and economic sustainability: fresh, feeling strong, and relatively young (at least for this type of journey). Not only was I out to explore the world, but change it! I’d seen enough already to know my mission: revolutionize the way the world dealt with economic growth.

Two earlier journeys — Shoveling Fuel for a Runaway Train and The Endangered Species Act — had taught me quite thoroughly about the fundamental conflict between economic growth and environmental protection. That was plenty of learning for instilling the mission. But there was literally and figuratively a world to explore, to learn the ways of pursuing the mission.

Not that I got to see much of the world literally. As Herman Daly put it in the foreword to Supply Shock, this was a book financed by the “Czech Foundation” — my nights, weekends, and leave from the “day job” with the U.S. government. No gondolas in Venice on this journey. However, I did spend at least a little time on focused study and conferencing in places as far flung as Poland and Ukraine, India and Thailand, Brazil and Colombia, with odd stops at places like the London Zoo (to speak about biodiversity loss) and La Décroissance conferences in Paris and Barcelona.

More importantly, however, I toured the worlds of the “worldly philosophers,” as Robert Heilbroner called the classical economists. The vessel of choice was the classic text, complemented by the invaluable exegeses of the economic historians. I toured their worlds as well as those of the Marxists, Georgists, and just about every other economic scholar united with an “ist.” 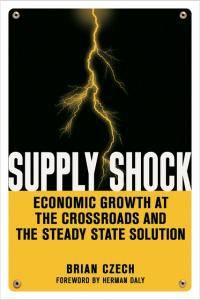 But the journey was far from restricted to the hallways of economic history. In fact, I spent much more time in the raw elements of physical and biological science, collecting the theoretical rare metals needed to patch up the holes in the conventional worldview of economic growth. The rarest of all was the one required to demonstrate, once and for all, that there is no reconciling the fundamental conflict between economic growth and environmental protection. (You’ll find it in Chapter 8.)

Sailing back and forth between the two continents of science and economics, I encountered diverse islands populated by anthropologists, theologians, the Council of Economic Advisers, national income accountants, World Bank demonstrators, politicians of all stripes, political appointees of all philosophies, and the UN General Assembly. They were all part of the journey; all part of Supply Shock.

For the most part it was a lonely journey, rowing upstream one day and riding into the wind the next. Hardly anyone out there in the political world wants you coming to their town on words of “limits to growth” or “steady state economics.” Virtually all politicians, most political appointees, and a lot of publishers allow only the happy horses of win-win rhetoric. There are precious few campsites for the truth about why we can’t have our cake and eat it too. For one cold and weary rider, New Society Publishers was green grass, fresh water, and dry firewood.

Now if you are an unlucky rider — I mean author — the keyboard eventually becomes an unwelcome sight. This is not a happy development. This is like the steering wheel looking bad to the race car driver, or the fly rod looking ugly to the fisherman. Ruthlessly enough, however, thumbs, wrists, and elbows tell you it’s time to hole up for the proverbial winter. It’s either that or learn voice recognition softwear – “correct that… software.”

If you’re just lucky enough, however, your book is done before then. So, directly from the intellectually herky-jerky throes of voice-recognition learning land, I offer my opinion that it is time for you to go out and grab your own copy of Supply Shock. In the reading another journey begins — your journey.

Why Stop at Massive Economic Growth when Infinite Growth Is within Reach?
6 replies

Moronic Oxymorons in the Age of Climate Change
Scroll to top
$