My parents were children during World War I, the so-called “war to end all wars.” I was a child in World War II, an adolescent in the Korean War, and except for a physical disability, would likely have been drafted to fight in the Vietnam War. Then came Afghanistan, Iraq, the continuous Arab-Israeli conflict, ISIS, Ukraine, Syria, etc. Now as a senior citizen, I see that war has metastasized into terrorism. It is hard to conceive of a country at war or threatened by terrorism, moving to a steady state economy. 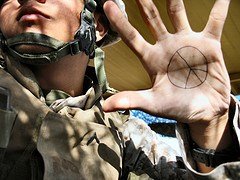 Contrary to popular belief, growth in a finite and full world is not the path to peace, but to further conflict. (Image: CC BY, Credit: Jayel Aheram).

For a while, the resource demands of growth can be met from within national borders. Then there is pressure to exploit or appropriate the global commons. Then comes the peaceful penetration of other nations’ ecological space by trade. The uneven geographic distribution of resources (petroleum, fertile soil, water) causes specialization among nations and interdependence along with trade. Are interdependent nations more or less likely to go to war? That has been argued both ways, but when one growing nation has what another thinks it absolutely needs for its growth, conflict easily displaces trade. As interdependence becomes more acute, then trade becomes less voluntary—more like an offer you can’t refuse. Unless trade is voluntary, it is not likely to be mutually beneficial. Top-down global economic integration replaces trade among separate interdependent national economies. We have been told on the highest authority that because the American way of life requires foreign oil, we will have it one way or another.

International “free trade pacts” (NAFTA, TPP, TAFTA) are supposed to increase global GDP, thereby making us all richer and effectively expanding the size of the earth and easing conflict. But growth in the full world has become uneconomic—increasing costs faster than benefits. It now makes us poorer, not richer. These secretly negotiated agreements among the elites are designed to benefit private global corporations often at the expense of the public good of nations. Some think that strengthening global corporations by erasing national boundaries will reduce the likelihood of war. More likely, we will just shift to feudal corporate wars in post-national global commons, with corporate fiefdoms effectively buying national governments and their armies, supplemented by already existing private mercenaries.

It would be naïve, however, to think that growth in the face of environmental limits is the only cause of war. Evil ideologies, religious conflict, and “clash of civilizations” also cause wars. National defense is necessary, but uneconomic growth does not make our country stronger. The secular west has a hard time understanding that religious convictions can motivate people to both kill and die for their beliefs. Modern devotion to the Secular God of Growth, who promises heaven on earth, has itself become a fanatical religion that inspires violence as much as any ancient Moloch. The Second Commandment, forbidding the worship of false gods (idolatry), is not outdated. Our modern idols are new versions of Mammon and Mars.

No Mere Resolution: The Vermont Legislature and the Steady State Economy
7 replies

Preempting a Misleading Argument: Why Environmental Problems Will Stop Tracking...
Scroll to top
$