The first and second laws of thermodynamics should also be called the first and second laws of economics. Why? Because without them there would be no scarcity, and without scarcity, no economics. Consider the first law: If we could create useful energy and matter as we needed it, as well as destroy waste matter and energy as it got in our way, we would have superabundant sources and sinks, no depletion, no pollution, and more of everything we want without having to find a place for stuff we don’t want. The first law rules out this direct abolition of scarcity. But consider the second law: Even without creation and destruction of matter-energy, we might indirectly abolish scarcity if only we could use the same matter-energy over and over again for the same purposes—perfect recycling. But the second law rules that out. And if one thinks that time is the ultimate scarce resource, well, the entropy law is time’s irreversible arrow in the physical world. So it is that scarcity and economics have deep roots in the physical world, as well as deep psychic roots in our wants and desires.

Economists have paid much attention to the psychic roots of value (e.g., diminishing marginal utility), but not so much to the physical roots. Generally, they have assumed that the biophysical world is so large relative to its economic subsystem that the physical constraints (the laws of thermodynamics and ecological interdependence) are not binding. But they are always binding to some degree and become very limiting as the scale of the economy becomes large relative to the containing biophysical system. Therefore attention to thermodynamic constraints on the economy, indeed to the entropic nature of the economic process, is now critical — as emphasized by Nicholas Georgescu-Roegen in his magisterial The Entropy Law and the Economic Process (1971).

Why has his profound contribution been so roundly ignored for forty years? Because as limits to economic growth become more binding, the economists who made their reputations by pushing economic growth as panacea become uncomfortable. Indeed, were basic growth limits recognized, very many very prestigious economists would be seen to have been very wrong about some very basic issues for a very long time. Important economists, like most people, resist being proved wrong. They even bolster their threatened prestige with such pretension as “the Sveriges Riksbank Prize in Economic Science in Memory of Alfred Nobel” — which by journalistic contraction becomes, “the Nobel Prize in Economics,” infringing on the prestige of real science, like physics. Yet it is only by ignoring the most basic laws of physics that growth economics has endured. Honoring the worthy contributions of economists should not require such flummery.

I once asked Georgescu-Roegen why the “MIT-Harvard mafia” (his term) never cited his book. He replied with a Romanian proverb to the effect that, “in the house of the condemned one does not mention the prosecutor.” 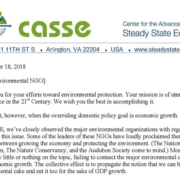 War of the Words: Rebranding the “Healthy Economy”
12 replies