It’s a good thing, the proliferating discussion about economic growth and environmental protection among ecologists. Such discussion was sorely lacking just ten years ago. Without addressing the subject of economic growth, the ecological professions would be but marginally relevant to society and doomed to extinction. Money is running out for research that appears benign at best and wasteful at worst in the days of fiscal austerity, otherwise known as the 21st century.

Much of the discussion about economic growth may be attributed to scientific, professional societies that got the ball rolling by developing technical reviews and position statements over the past decade. Some of these positions are scientifically sound, while others stop short. None are perfect, of course, yet some of the professional societies have described in rigorous detail the “fundamental conflict” between economic growth and environmental protection with the fortitude of their scientific convictions. A short list would include The Wildlife Society, U.S. Society for Ecological Economics, and American Society of Mammalogists. The leadership provided by these societies has been invaluable and is finally reaping rewards for students, faculty, programs and universities. 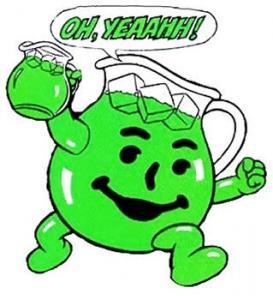 How about an ice-cold glass of “sustainable growth?”

A few other professional societies haven’t yet run out of green Koolaid. The Ecological Society of America, for example, still calls for the supremely oxymoronic “sustainable growth.” Many ESA members who get it about limits to growth have been, to put it perhaps too frankly, victimized and embarrassed by a vocal and influential minority that refuses to shed their political training wheels on the racetrack of economic policy matters.

And so it came as no surprise to see the recent exchange (February and March, 2012) on the “Value of Nature” between Bernd Blossey and Michelle Marvier in Frontiers in Ecology and the Environment. The fact that they carried out this discourse in Frontiers suggests exposure to ESA deliberations, publications, and politics. An ESA background can make an author susceptible to muddling the message on the relationship between economic growth and environmental protection. Consider Marvier’s second-from-last paragraph:

“I have found that many conservationists view striving for material gains and the prioritization of people above non-human nature as societal pathologies that need to be cured. This is an unproductive and misanthropic attitude…”

So far so good, for the most part. Her first sentence would be hard to argue with. Her second one has a large dose of truth as well. On the other hand, “liquidator syndrome” is every bit as misanthropic, as I described in Shoveling Fuel for a Runaway Train. Liquidator syndrome occurs when a conspicuous consumer gets psychologically mired down in Maslow’s fourth level (the pursuit of self-esteem) rather than progressing to the fifth (self-actualization). Liquidator syndrome manifests in such behaviors as Hummer driving, McMansion building, fur-coat wearing, etc. Let’s face it: it’s bad for the environment, biodiversity, and the grandkids.

But neither Marvier nor I are psychologists. We shouldn’t quibble about which end of the spectrum – extreme conservation or extreme consumption – is more misanthropic. We’re ecologists and, therefore, economists of nature. Therefore the bigger bone to pick starts with the next sentence:

“… Setting up dichotomies between economic growth versus protection of nature is a dead-end for conservation. In a separate survey of 800 American voters… 76% felt that ‘we can protect land and water and have a strong economy with good jobs for Americans at the same time, without having to choose one over the other.’ Only 19% felt that ‘sometimes protections for land and water and a strong economy are in conflict and we must choose one over the other.’ However, when the question is framed such that people are forced to choose, the economy wins handily.”

There is enough wrong in these sentences to fill a small textbook, but let’s start with the most obvious. “Setting up dichotomies” sounds too close to “making up dichotomies” or “inventing dichotomies” for comfort. It reminds me of the time some colleagues and I were attacked for supposedly “assuming” there was a conflict between economic growth and biodiversity conservation, when in fact our group had concluded, after many years of study, that indeed there was such a conflict. Meanwhile the accusers had virtually no background in the subject of economic growth.

In ecological terms, due to the tremendous breadth of the human niche, the human economy grows at the competitive exclusion of nonhuman species in the aggregate. That’s sound, peer-reviewed science. Those individuals and organizations that have conducted due diligence on the topic have invariably concluded as much.

We can’t make a dichotomy a false one by wishing it away and ignoring the ecological and physical sciences. But we can sure confuse readers by conflating economic growth with a “strong economy.” Unfortunately, that is exactly what Marvier does.

An economy can be strong, with low unemployment, fiscal soundness, and a stable currency, regardless of whether it is growing or non-growing. Ultimately, in fact, the only sustainable alternative is a steady state economy; neither growth nor recession may continue perpetually. More importantly, long before a growing economy breaches its long-run carrying capacity, economic growth starts causing more problems than it solves. In that sense it is “uneconomic growth” and not worthy of the label “strong.”

It behooves ecologists who want to weigh in on economic growth to stop and think about precisely what it is. Of course you can always try to reinvent the phrase when your argument is failing. But that’s unproductive because economic growth is what it is, and the policy maker knows what it is. Economic growth is increasing production and consumption of goods and services in the aggregate. (It’s not the growth of the bicycle sector while the SUV sector crashes.) Economic growth absolutely entails a growing human population and/or per capita production and consumption. It is indicated by increasing GDP, or gross domestic product. It’s a policy goal with clear-cut fiscal, monetary, and trade policy levers and buttons. It’s also a policy goal with widespread public support.

Now that’s a dead-end for conservation. Yet that is exactly what many ecologists — not to mention economists and politicians — have said for decades. It is a fallacy of epic proportions and, in my opinion, the single biggest failure of the ecological professions and the environmental community thus far.

It’s also a failure that is being rectified as one professional organization after another puts its scientific integrity where its mouth is, clarifying the fundamental conflict between economic growth and environmental protection.

Let’s not underestimate the public’s ability to deal with a conflict, once it’s been clarified. The American public eventually dealt strongly with the use of organochlorines, the deterioration of the ozone layer, and even with smoking. In each case, step 1 was coming clean on the science and refuting such revolting rhetoric as “I believe that nicotine is not addictive.”

In this case, step 1 is coming clean on economic growth, refuting the revolting rhetoric that “there is no conflict between growing the economy and protecting the environment.” Let’s tell it like it is, plainly but also with the nuance earned by studying the matter. By telling it like it is, we’ll have a message that resonates with the public’s common sense. That’s what produces respect, relevance, and ultimately effectiveness in the policy arena.

Opportunities for a Different Economy in 2011

The Poison Beer of GDP
6 replies