Among the avenues by which Takings case law could be adapted to the reality of a finite planet are these three:

One: Change the default by changing the definition of what constitutes a reasonable investment expectation. It is no longer reasonable for an individual to expect to profit from using property in ways that would destroy or diminish the property’s ability to provide ecosystem services to the public at large. Instead of the general public having to pay property owners the going market rate for land burdened by regulation–a rate that reflects the most intensive economic use of the land that can be imagined by infinite-growth-believing, financial-risk-taking optimists–land owners would have to compensate the general public when their acts diminish the flow of ecosystems services.

Two: Change the default by promulgating the notion of an ecological servitude. All property that abuts navigable waters in the U.S. is held under a navigational servitude: the public’s interest in maintaining navigable waters trumps the interests of waterfront property owners. As Justice Jackson put it in United States v. Willow River Power Co., “Rights, property or otherwise, which are absolute against all the world are certainly rare, and water rights are not among them.” Given the legitimate authority of government to pursue the public interest in establishing and maintaining navigable waters, he said, “private interest [in the disposition of waterfront property] must give way to a superior right, or perhaps it would be more accurate to say that, as against [the public interest represented through] the Government, such private interest is not a right at all.”

Under current interpretations of the servitude, when public authority exercises its power over navigation in ways that affect the interests of property owners, the public may not be required to pay compensation under the Takings Clause. Land abutting navigable waters has always been subject to this servitude, so the exercise of it does not necessarily constitute a taking or an unforeseeable loss for the property owner.

The notion of an ecological servitude would be constructed by analogy: the paramount interest the public has in maintaining the ecosystems on which civilization depends would supersede whatever particular interests individuals hold in parcels of property. Just as allowing uncontested trespass for a number of years establishes a presumptive public right of way, the public’s enjoyment of ecosystem services has long since established a presumptive right to the continued enjoyment of them. An ecological servitude would acknowledge this. A few cases decided on this ground would give undeniable constructive notice to property owners–a notice already implicit in legislation like the Endangered Species Act and the Clean Water Act–that the bundle of rights conveyed to them by title is subject to this limitation.

“Ecological servitude” is not yet a common phrase in legal circles. This should change as various strands of thought and action cohere around the concept, and as scholars discover that it is implicit in much common law and environmental legislation. A variety of groups and organizations (including the state of Louisiana) talk of conservation easements producing, in sum, a conservation servitude on particular parcels of land. An NGO in Costa Rica allows that it created the first ecological servitude in Central America in 1992. 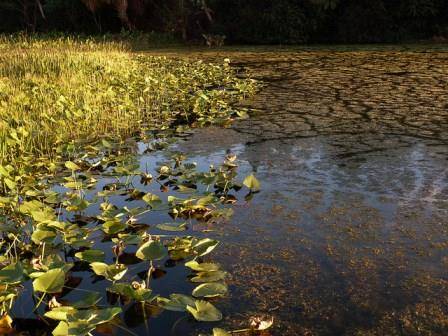 Preserving the ecosystems that support civilization should not be financially prohibitive. Photo Credit: Lisa Jacobs

Three: Acknowledge that value in land is created as an externality of decisions made by others, and compensate accordingly. Under this approach, an environmental regulation might still offer grounds for a Takings claim, but the notion of what amounts to “just compensation” would be radically altered. Take the case that led the Court to decide that a demand for off-site compensatory restoration constitutes a taking. Developer Coy Koontz owned 15 acres near Orlando, mostly wetlands, and sought a permit to develop the land by filling some of it. He objected to the permit condition that he must pay for compensatory wetlands restoration elsewhere, refused the permit and brought suit. In a remarkable extension of Takings law, the court decided by a narrow majority that Koontz had suffered a taking even though wetlands filling permits are not granted automatically and even though he had not in fact had any property or money taken from him. What the St. Johns River Water Management District proposed to take from him was nothing more substantial than his expectation of getting a larger profit than he could get if he had to pay for mitigation. But why, exactly, could he expect any profit at all for developing and then selling his land? In central Florida as elsewhere, land values are mostly the result of decisions made by others–population growth and in-migration into the area, construction of nearby infrastructure including roads and schools and water service, and proximity to cultural developments that make the area an attractive place to live for some people. These are all decisions in which Koontz had no, or only a very minor, role. If much of the value of a piece of property is not a result of the owner’s efforts, but is a social creation, why should a private owner be compensated when part of that socially created value is retrieved by the public through regulation in pursuit of a legitimate public interest?

Credit Herman Daly and Joshua Farley with asking the question in their introductory Ecological Economics textbook: “Are individuals entitled to wealth created by society . . . or should this wealth belong to society as a whole?” A reasonable answer to that question would have the effect of diminishing considerably what constitutes “just compensation” under the Takings clause–a result that makes ecosystem-preserving public action less expensive, and thereby puts the continuation of civilization within easier reach of a public treasury that will become increasingly straitened as the era of high-EROI fossil fuel comes to an end.

No matter what we do we’ll eventually have an ecologically sustainable civilization with a steady state economy, one that’s in dynamic balance with its host ecosystems. That’s because by definition an unsustainable system doesn’t last. We can make the transition haphazardly, through crisis, catastrophe, and collapse, at much cost in human pain and suffering, or we can anticipate the necessary changes and give ourselves a better, less brutal path forward. To find that path we’ll have to identify and correct infinite-planet suppositions wherever they are embedded in our system. Fifth Amendment Takings case law is one such place. Preserving the ecosystems that support civilization should not be financially prohibitive. Current Takings law says it should, and that’s why it needs to change.

[Editor’s Note: This is the second piece of a two-part post. You can read Part 1 here.]

Innovating Beyond the Growth Trap: A Challenge to the Ecofiscal Commission’s Growth Fixation
2 replies

When Growth Trumps Freedom: the Chill in Canada Comes from our Government, not...