CASSE is engaged in a most interesting discussion with the outstanding economists at the Global Development and Environment Institute (GDAE) about how the field of Ecological Economics treats money.  The discussion began in the Triple Crisis Blog with Alejandro Nadal’s article, “Money Matters, Mr. Daly.” Herman Daly and I both posted comments there, adding to comments from Kevin Gallagher and Neva Goodwin, and The Daly News also featured two essays on money:  Daly’s “Money and the Steady State Economy,” and  “Money is a COW” by me.  Nadal has responded with a follow-up on the macroeconomics of sustainability.  Please follow the discussion and weigh in with your comments. 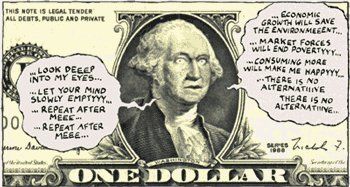 A Journey of No Return, Not a Circular Economy
1 reply

The Trophic Theory of Money
Scroll to top
$