Choosing a college (not to mention getting in) can be a trying experience, especially for the nerdier souls among us. In my case, I had absolutely no plan for what to do with the rest of my life, so I selected a big university that offered degrees and classes in everything. I figured that I could explore several branches of knowledge, take a few detours down unusual alleys of academia, and figure something out for my future along the way. That’s how I ended up in Marketing 101 as a freshman. And reflecting on the offerings of that class, I’m pretty sure the whole thing was based on an erroneous assumption.

Before attending the class, I didn’t really know what marketing was. In fact my preconceived notions about marketing came mostly from cartoon characters who inhabited the Technicolor landscape of sugary breakfast cereals: Count Chocula, Tony the Tiger, Cap’n Crunch, the cuckoo bird who becomes agitated in the presence of artificial choco-balls, and the leprechaun who refuses to share his bounty of marshmallows with sugar-starved children. The class was structured around the 4 P’s (product, price, place, and promotion), a mnemonic to remind students that a marketer has to consider an awful lot of stuff to sell a product. Much to my disappointment, neither the professor nor the textbook entered the realm of children’s breakfast cereals, but we certainly did explore case studies from other sectors to get a sense of what makes a successful marketing strategy. 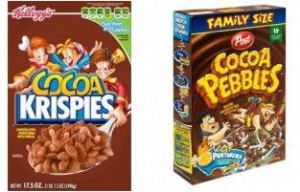 What feats of marketing can differentiate these two seemingly identical products? Wouldn’t this be the most instructive marketing case study of all time?

The first and most carefully considered case study was the United Colors of Benetton. It was all about “branding.” We studied how the company had used international flair and bright colors to sell lots and lots of clothes. The point for us students was to learn some things about branding that might help us blossom into successful marketers. Looking at that class in the rearview mirror today, I see that a faulty assumption formed the foundation of everything we studied. Let’s call it the BIG ASSUMPTION. Simply put, the BIG ASSUMPTION is that more is better. Without question, the Benettons of the business world should always sell more, and marketing techniques should be used to achieve that outcome.

Why is the BIG ASSUMPTION always there, and why does it go unquestioned, especially at a university with a big-name business school? It all has to do with visibility. The upsides of successful marketing campaigns — of selling more — show up right in front of our faces, popping with bold, Benetton colors. When you sell more, you get more money. And more money gets you more perks — more jobs, more toys, more status, more choices about where you live, what you eat, and what you wear. This lesson gets ingrained in our thinking and worldview from an early age. By college, I certainly understood it.

I used to go to the ATM in the student union to take out cash for food on the weekends (the dining halls were closed on Saturdays and Sundays). On one such occasion, I stuck my card in the machine, entered my PIN, and hit the button for “account balance.” The machine spit out a slip of paper that reported my life savings at $11.43. Next I punched the buttons to request a withdrawal of $5 (that way, I’d still have $5 for the next weekend). While the machine was taking its time to count all those bills, I noticed a pile of discarded account slips strewn atop the machine. I sifted through them while the ATM continued to sift through its stacks of cash for my $5. Many accounts were of the 5-digit variety — lots of rich kids at college. As I prepared to go searching for the best deal on noodles, I couldn’t help but think what sort of gourmet meals I might be able to get with a 5-digit account instead of a 5 dollar bill.

So it’s really quite simple. The assumption to which marketing students (and just about every participant in the economy) submit is this:

But blind submission to this assumption generates plenty of downsides. If Benetton keeps selling more, and Kellogg’s keeps selling more, and GM, and Sony, and Exxon, and Apple, and Wal-Mart, and on and on, we find ourselves bumping up against the limits to growth. But the consequences are much less visible. It’s hard to notice the climate warming. It’s hard to notice species going extinct. It’s hard to notice the drawdown of aquifers. It’s hard to… (ok, ok, you get the point). The downsides of accepting the BIG ASSUMPTION are less visible than the upsides, but there’s also another problem. The upsides accrue to a select few, while the downsides accrue to society at large. As Benetton sells more and more shirts, it makes more and more profits. Its employees enjoy higher salaries and more status. At the same time, it does not suffer the consequences from increased emissions and use of natural resources — someone somewhere else, often sometime in the future, feels the pain. In essence, the economy operates by concentrating benefits and diffusing costs, especially for those businesses with the most successful marketing departments.

To debunk an assumption, especially one with the visibility problems of the BIG ASSUMPTION, you have to study. You have to learn about the concealed downsides. For the BIG ASSUMPTION, that means studying ecology and understanding (to the extent we can) the science behind environmental systems. The author and activist Bill McKibben is certainly someone who has done his homework. His studies have led him to question the BIG ASSUMPTION. On the first page of his book, Deep Economy, he writes:

For most of human history, the two birds More and Better roosted on the same branch. You could toss one stone and hope to hit them both. That’s why the centuries since Adam Smith have been devoted to the dogged pursuit of maximum economic production…  But the distinguishing feature of our moment is this: Better has flown a few trees over to make her nest. That changes everything. Now, if you’ve got the stone of your own life, or your own society, gripped in your hand, you have to choose between them. It’s More or Better.

I vant to sell you crud!

More Count Chocula actually makes everyone worse off, except of course for the few people who manufacture and market Count Chocula. By the day, it becomes more and more obvious that it’s time to replace the outdated fixation on More with a modern appreciation of Enough. The challenge is to configure the economy in such a way that people and organizations can pursue Better instead of More. Maybe we can start by overhauling Marketing 101.

IPCC Report: Happily Ever After or Miserable Ever More?

The Fallacy of the Tragedy of the Commons
Scroll to top
$