When I graduated from college, I was trapped underneath a mountain of debt. I had no money in the bank, $25,000 worth of student loans, and an interesting, but low-paying job doing research on economic and environmental policy. I’m sure many students today look at that $25,000 figure longingly, as they struggle with debts upwards of $100,000. But for me, the $25,000 was huge. After adding up rent, food, loan repayment, and other basic expenses, I didn’t have any money left at the end of each month. It became obvious very quickly that I was stuck – I didn’t have something that I truly desired: breathing room.

In order to reclaim some breathing room, I decided to make paying off my student loans a top priority. I worked hard, cut expenses to the bone, and put as much extra money as possible toward those loans. I paid them off in 3 years and found myself with that much-desired and often elusive breathing room. How did I use it? I took an entire summer off from work and rode a tandem bicycle with my girlfriend (now wife) across the country – a trip that changed my life for the better, but that’s a story for another day.

The search for breathing room drives much of what we do in the economy as households, businesses and governmental organizations. We have pursued economic growth (increasing production and consumption of goods and services) as a policy to gain breathing room. But, paradoxically, economic growth is now using up the very breathing room that we’ve been chasing and hoping to save for the future.

Every person, perhaps even every living organism, is interested in a little bit of breathing room – a chance to live life away from the edge of the cliff. In his book, The Beak of the Finch, Jonathan Weiner has written:

The lucky individual that finds a different seed, or nook, or niche, will fly up and out from beneath the Sisyphean rock of competition. It will tend to flourish and so will its descendants – that is, those that inherit the lucky character that had set it a little apart.

Weiner’s quote provides an eloquent evolutionary perspective on the benefit of establishing some breathing room. Nature imposes a lattice of limits upon life; there is only so much energy available, so many non-renewable resources, and a fixed speed at which renewable resources can be regenerated. Figuring out how to secure leeway within this lattice is a grand goal of all creatures, be they sunflower sprouts, chickadees, or human beings.

The story of human striving, whether considered in the context of an individual or an entire economy, features the quest for breathing room as a central theme. Attainment of breathing room bestows a greater level of security, a wider array of choices for how to spend time and allocate resources, and greater possibilities for meeting needs. Early economists such as Adam Smith and Francois Quesnay recognized the importance of breathing room in the form of agricultural surplus. It is precisely this agricultural surplus that allows for the division of labor. Without being occupied by hunting, gathering, growing, or otherwise obtaining sustenance, people can spend their time and energy on other productive activities. Division of labor, in turn, has generated efficiencies and economic growth that have, in the past, provided even greater quantities of breathing room.

The emergence of breathing room in the economy has given rise to a choice, not unlike the financial situation I created when I paid off my student loans: what do we do with it? In the economy of a single household, this choice might take the form of purchasing more goods and services. It might also take the form of working fewer hours, spending more time on leisure activities, and sharing extra resources with family, friends or community members.

What about the whole economy, then? An economy is essentially a very large household (the word economy actually derives from the Greek for household). A household contains a small number of people interacting with one another and consuming a quantity of goods and services. An economy is simply a larger number of people (the entire population of the economy) consuming a larger quantity of goods and services (the measure of the size of an economy, GDP, can be calculated by multiplying population by per capita consumption). The same choices that exist for a household also exist for the economy as a whole when deciding what to do with breathing room.

The economy of the United States and many other nations around the globe, however, don’t recognize the range of choices. We tend to spend our breathing room the same way in an unending and unsound cycle of economic growth. When we have breathing room, we use it to expand the scale of the economic enterprise; we plow it right back into economic growth, and we have to stare down the possibility of running out of air.

The cycle is composed of these steps:

1. We grow the economy by increasing the production and consumption of goods and services (generally indicated by increasing real GDP).

2. As the economy grows, it begins to bump up against ecological limits, and we experience the negative effects of that growth. Examples include excessive and unhealthy pollution, loss of natural resources, degradation of ecosystems, poverty and famine.

3. We use technological innovation, which is intimately connected to economic growth, to push back the limits to growth. The most stunning example of this step in the cycle is the green revolution, in which Norman Borlaug and colleagues developed a variety of farming techniques to increase agricultural output and world food supplies.

4. We establish breathing room. In the case of Borlaug’s innovations, malnutrition, famines and starvation were avoided.

5. We use our breathing room to go on growing the economy and the cycle repeats itself. After the green revolution, human population, production and consumption continued their exponential upward march.

A critical change, however, occurs each time through the cycle. Ecological limits become more imposing, as the consequences of growth shift from the local to the global scale – instead of worrying about a local river catching fire, we are now worried about destabilizing the climate of the entire planet. In turn, the technological innovation needed to deal with these consequences becomes more complex. As population continues to increase, stocks of natural capital continue to decline, and technological solutions require increasing complexity, the prospects of achieving lasting breathing room become more and more precarious.

Why, then, must we spend our breathing room on growth? What about short-circuiting this cycle of growth? The economy is a human construct, and growth of the economy is not an ironclad natural law – it is a human choice to grow the economy. Granted our institutions and culture are geared for growth. Cessation of growth is avoided at all costs for fear of unemployment and social instability, but with growth working like a huge vacuum cleaner sucking up all our breathing room, perhaps it is time to get to work on changing our institutions and culture. With the right economic framework in place, we can take our breathing room and cut out steps one and two of the cycle. In a steady state economy, we can use our breathing room for innovation and development, rather than for growth. 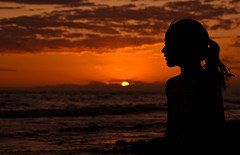 Progress and prosperity are not about ever-increasing consumption of goods and services. True progress and real prosperity are about meeting needs, achieving a high quality of life for all people, and sustaining natural resources and useful infrastructure to provide opportunities for future generations. Breathing room is the main ingredient in the recipe for progress and prosperity. Unmindful pursuit of economic growth is eating up this main ingredient before we can even finish preheating the oven. Establishing a steady state economy, with stable population and stable throughput of energy and materials, is the way to protect our breathing room. The sooner we get started on the transition, the sooner we can all breathe a little easier.

Let’s Meet in the Ring: Steady Staters in the “Green Doughnut”
15 replies

Two “Robin Hood” Taxes for the Price of One What Is a “Green Economy?”
Scroll to top
$