Should we be thinking about the number simultaneously alive or the cumulative number ever to live?

More people are better than fewer—as long as they are not all alive at the same time! Sustainability means longevity for the human race—more people enjoying a sufficient level of consumption for a good life over more generations—not more simultaneously living people elbowing each other off the planet. Nor does it mean a perpetual sequence of generations. Nothing is forever in the present Creation—both science and Christianity agree on that, and perhaps other religions do as well. Christianity hopes for a New Creation free from death, sin, and decay. Science is not in the business of hope, although scientism peddles cheap optimism as a substitute. I share the Christian hope, but also accept the scientific description of the present Creation and its subjugation to entropy and finitude. Economist Georgescu-Roegen criticized sustainability and the steady state economy as advocacy of perpetuity (or “eternal life for the species”) rather than longevity. Maybe some people confused the two, but it is a confusion easily corrected. As creatures of the present Creation, we must do the best we can with what we have for however long it lasts, even while we may hope for the New Creation as an eschatological faith.

Christianity gives people the hope that a New Creation will save our present Earth. (Image: CC0, Credit: janeb13)

In the past “doing the best we can” seems to have meant a larger and larger population consuming more and more stuff. Now we see that too many people alive at one time and consuming too much per capita, reduce the carrying capacity of the earth for all life. This will mean fewer people and/or lower consumption per capita in the future, and a lower cumulative population ever to live at a level of consumption sufficient for a good life. If our ethical understanding of the value of longevity (“sustainability”) is to “maximize” cumulative lives ever to be lived, subject to a per capita consumption level sufficient for a good life, then we must limit the load we place on the Earth at any one time. Fewer people, and lower per capita resource consumption, facilitated by more equitable distribution today, mean more, and more abundant lives for a longer, but not infinite, future. There is no point in maximizing the cumulative number of lives lived in misery, so the qualification “sufficient for a good life” is important and requires a deep rethinking of economics, a shift of focus from growth to sufficiency.

Given that the whole marvelous shebang is still going to end sometime, why make extraordinary efforts to prolong it, especially if, as the modern intelligentsia assures us, the universe and all life are just random events, as well as temporary? And if we have no idea of what a good life is, then we cannot say how much per capita consumption is sufficient for a good life. However, for some of us, faith in the love of the Creator and the promise of New Creation substitutes divine purpose for cosmic random and saves us from despair over our repeated failures, as well as over the ultimate impossibility of preserving this Creation in the very long run. Like the first Creation, New Creation will be a miracle. It gives hope in the face of entropy and finitude but does not solve our ethical problem of how to share the limited life support capacity of the present Creation among generations and species. The belief that the end of the world will occur soon, with lots of life-support capacity left unused (wasted), is a tenet of some fundamentalist Christians who consequently consider themselves exempt from the responsibility of Creation stewardship. Fortunately, this view seems to be waning.

Most scientists will not be happy with talk about miracles, with hope in the New Creation. Yet when faced with the ultimate heat death of the universe, and the meaninglessness implicit (and increasingly explicit) in their materialist cosmology, some scientists seem to flinch and look for optimism somewhere within their materialism. They invent the hypothesis of infinitely many (unobservable) universes in which life may outlive our universe. They were led to this extraordinary idea in order to escape the implications of the anthropic principle—which argues that for life to have come about by chance in our single universe would require far too many just-so coincidences. To preserve the idea of chance as reasonable cause and thereby escape any notion of Creator, they argue that although these coincidences are indeed overwhelmingly improbable in a single universe, they would surely happen if there were infinitely many universes. And of course, our universe is obviously the one in which the improbable events all happened. If you don’t believe that Shakespeare wrote Hamlet, you can claim that infinitely many monkeys pecking away at infinitely many typewriters had to hit upon it someday. 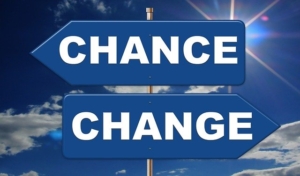 Humans can either chance upon Christianity’s hope for a better life or we can change how we are living today.
(Image: CC0, Credit: geralt)

Unfortunately, the evidence for infinitely many universes, or monkeys for that matter, is nonexistent. Likewise, the only “evidence” that could be offered to support hope for a future miracle would be the occurrence of a similar miracle in the past. That, of course, would be the Creation itself. Science rightly tries to account for this Creation, as far as reasonable, in its own mechanistic terms, and of course, rejects “miracle” or God as an explanatory category. Whether ad hoc postulation of infinitely many unobservable universes qualifies as a reasonable scientific explanation, I will leave to the reader’s judgment. But the working hypothesis of scientific materialism, however fruitful it has been, should not be sanctified as the Ultimate Metaphysics of Chance. Nor does adding Darwinian natural selection to Mendelian random mutation alter the picture, since the selecting criterion of environmental conditions (other organisms and geophysical surroundings) is also considered to be a random product of chance. Mutations provide a random change in the genetic menu from which natural selection picks according to the survival value determined by a randomly changing environment. Such a Metaphysics of Chance precludes an explanation of some basic facts: First, that there is something rather than nothing; second, the just-right physical “coincidences” set forth in the anthropic principle; third, the “spontaneous generation” of first life from inanimate matter; fourth, the creation of an incredible amount of specified information in the genome of all the irreducibly complex living creatures that grew from the relatively simple information in the first living thing (random change destroys rather than creates information); fifth, the emergence of self-consciousness and rational thought itself (if my thoughts are ultimately the product of random, why believe any of them, including this one?); and sixth, the innate human perception of right and wrong, of good and bad, which would be meaningless in a purely material world. Explaining these facts “by chance” strains credulity even more than “by miracle.”

Metaphysical humility remains a virtue for both science and religion, and longevity (sustainability) is a metaphysically humble goal appropriate for limited creatures in the face of ignorance and mystery. Whether we will, in the long run, have the courage to serve even that modest goal in the absence of eschatological hope remains a question. Christianity and science both recognize the fundamental limits of this Creation. Christianity offers ultimate hope in New Creation; science remains mute about that. Scientism, however, seeing no limits to this Creation, offers, instead of hope, the campaigning optimism of, for example, IBM’s call “to build a smarter planet” and NASA’s promise of space colonization—all in the service of a forever-growing population of simultaneously-living big consumers. Phooey!

Sustaining our Commonwealth of Nature and Knowledge

Existential Dread: We Need to Talk About our Feelings
11 replies