The Occupy Wall Street movement has struck a chord with its protests against growing inequality in the United States. Suddenly, it is conceivable that policies may be enacted in the next Congress that would raise taxes on the rich and make the American dream more affordable. But if all the Occupy movement does is to restore middle-class demand for large homes and late-model automobiles, it will have been a failure.

The United States faces two economic crises: one is a crisis of severely unequal wealth and political power; the other is a climate crisis driven by an economic model based on insatiable consumption. A Robin Hood approach that redistributes wealth from the rich to the less affluent but does not address the dynamic of excess consumption will not fix and could even exacerbate the climate crisis.

These two economic crises have a common driver — greed. Is it possible that the Occupy movement could take on greed itself, or is that pie-in-the-sky dreaming?

Consider this. Back in 1966, only 42 percent of college freshman considered “being very well off financially” to be an important personal goal. That figure rose to about 75 percent by the time President Ronald Reagan left office. If it is possible to promote greed, it must also be possible to promote generosity.

A traditional way to discourage greed is by shaming those who engage in elaborate displays of wealth. But if criticizing excess consumption made a powerful difference, we would have seen results already. Allow me to introduce a practice that can address greed called mindfulness. Although derived from Eastern thought, it has been appropriately secularized for Western audiences.

I’ve led mindfulness meditations at the Occupy Boston spirituality tent. Mindfulness is the practice of paying attention to the present moment with a nonjudgmental accepting attitude. Many Americans have been exposed to it as part of Mindfulness-based Stress Reduction, a hospital-based program that helps people deal with physical and emotional pain. Indeed, the program I am trying to create could be called Mindfulness-based Greed Reduction.

When one pays close attention to the present moment with a welcoming attitude, the here and now becomes more vivid and joyful. Mindfulness can make negative experiences feel neutral. It also makes neutral experiences feel positive, by restoring a sense of freshness to the wonderful things in life you take for granted. When you realize how much you already have, you feel less need to accumulate more and more. It thus promotes modest appetites in place of greed.

The best way to verify this is to start practicing mindfulness yourself and see if it works. But for those interested in a technical explanation, let me go into the neuroscience.

Our appetites go through a cycle of wanting and liking — which reinforces further wanting. When we desire something, the brain transmits a chemical called dopamine. When we get what we want and like it, the brain releases internal opioids. The latter are chemically similar to morphine and heroin, which helps explain how desires can become addictive.

Addicts need increasingly higher doses of a drug in order to continue to get the same high. People who get their satisfaction from having and spending money likewise need more and more of it to feel rewarded. This is because of habituation. Dopamine neurons in the brain react most strongly to unexpected rewards. When rewards come in steadily and predictably, handling them shifts to the habits system, which operates with little conscious involvement and little sense of pleasure.

This presents a challenge to advocates of a steady state economy. How can you keep people excited when the stream of rewards fails to grow? 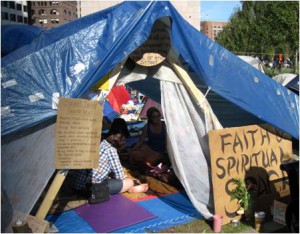 Mindfulness addresses this challenge by showing how to find novelty in the smallest details of daily life. As you tend your own garden, you become absorbed by each blade of grass. This absorption produces a steady flow of dopamine and a continuous feeling of satisfaction. Mindfulness generates novelty and excites the dopamine neurons not by covering a lot of ground fast, but by delving deeper into familiar turf. As the poet Allen Ginsberg once wrote, “You own twice as much rug if you’re twice as aware of the rug.”

Mindfulness practices, including yoga, are spreading rapidly in the United States. They will spread even more quickly if movements like Occupy embrace them. But will this be quick enough to make a difference for the climate crisis? Although I can’t predict the future, it may be easier to change young people’s minds about consumption that it is to alter the energy infrastructure of the United States.

Ultimately, we need to pass legislation that restrains carbon emissions. But it will be easier to do if Americans realize we can continue to grow in happiness even as we shrink our dependence on the planet’s resources.

Rick Heller is the author of Occupy the Moment: A Mindful Path to a New Economy.

Growth of GDP and Discontent in Egypt and Tunisia
8 replies