It’s beginning to look a lot like Christmas,
Everywhere you go.
Take a look in the storage hut,
Where doors roll open and shut,
And piles of pap and useless crap do grow.

It’s hard to know where to begin a rant about the materialistic mess that our culture has made of Christmastime in the United States. An easy target is the Thanksgiving midnight-madness sales at big-box retail stores. And there’s always those devious marketers who use nostalgia to turn December into a month of mass consumption. But there’s one industry that, more than any other, epitomizes materialism and our seemingly limitless propensity to consume: self storage.

Self-storage businesses are warehouses where people rent garages to hold their excess stuff. In the not-too-distant past, a small number of self-storage businesses catered to homes in transition (for example, when people were moving from one place to another). On the pop culture scene, if self storage made any appearance at all, it was in a macabre role. For instance, in the film The Silence of the Lambs, Clarice Starling searches a storage unit and finds a pickled head in a jar.

Oh how things have changed! Over the past few decades self-storage facilities have popped up faster than Starbucks outlets. The U.S. has over 2.2 billion square feet (78 square miles) of rentable space, more than 3 times the size of Manhattan Island.[1] One out of every 10 American households now leases a unit.[2]

What’s going on here? Two separate currents have come together to form a riptide that drags people under the sea of self storage. The first current is the credit-card-fueled shopping frenzy that has put many Americans in a position of owning too many possessions. The second current is the promotion of self storage as an investment opportunity for entrepreneurs. The first current is pretty well documented,[3] so let’s float along with the second current for a bit.

The place to get started is a bookstore or your local library. There you might be able to find How to Invest in Self-Storage by Scott Duffy and R. K. Kliebenstein (2005), Self-Storage Investments by Richard Stephens (2008), or Rent It Up! Four Steps to Unlocking the Profit Potential in Your Self-Storage Business by Tron Jordheim (2009). Of if you prefer fiction to how-to books, there’s even a novel titled Self Storage (2008) by Gayle Brandeis.

Here’s a quote from the opening of Rent It Up!:

But if you are trying to create as much profit as you can and build a sustainable business, as well as a real estate asset that will increase in value far faster than your competitors’, then you are in the right place and should keep on reading.” 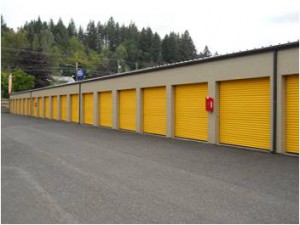 Maybe a row of self-storage units could hold all the books about self storage.

It’s not that easy to define the word “sustainable,” but one wonders what meaning the author ascribes to this term when he refers to building a sustainable self-storage business.

One thing’s certain about sustainability: it doesn’t result from continuous exponential growth. The Self Storage Association (SSA), the trade organization and lobbying arm of the industry, reports that self storage is a $20 billion industry. It has been the “fastest growing segment of the commercial real estate industry over the last 30 years and has been considered by Wall Street analysts to be recession resistant based on its performance since the economic recession of September, 2008.”[4] What has made the industry recession-proof? One answer is that foreclosures encourage the newly homeless to move their stuff into temporary storage. In the age of uneconomic growth, when overall growth is making the U.S. poorer rather than richer, the self-storage industry appears to be an uneconomic leader.

Not everyone has the means to start a self-storage business, but would-be entrepreneurs have another way to get in the game. A cottage industry has developed around auctions from failures in self storage. When a tenant fails to make payments on a self-storage rental, the storage company can auction off the contents of the unit. Another trip to the bookstore or library can catch you up on this trend. These books explain how to exploit such a circumstance: How to Make Boxes of Cash with Self-Storage Auctions by Barbara Rogers (2007), Making Money with Storage Auctions by Edwards Busoni (2008), Mini Storage Auctions: Uncover the Cash Within by L. S. James (2010), and Making Money A-Z with Self Storage Unit Auctions by Glendon Cameron (2011).

It’s a surprise that no one has written How to Make Money Writing and Selling Books about Self-Storage Auctions!

Moving from the unreal to the surreal… self storage has rebounded from its lowly pop-culture status in The Silence of the Lambs. The cable channel A&E broadcasts a program called Storage Wars about people competing for profits in self-storage auctions. A&E’s website says that Storage Wars, “which follows teams of bidders looking to score it big in the high stakes world of storage auctions, ranks as A&E’s number one series of all time among adults 25-54. During its first season, the series averaged 2.8 million viewers per episode and peaked at 3.8 million.”[5]

In the spirit of regaining a positive attitude during this holiday season, I’d like to propose a New Year’s resolution for the nation. Let’s ditch our storage units. It should be a snap for the third-most-popular type of self-storage customers: people storing items they no longer need or want.[6] And for other customers, downsizing can be downright liberating. This Christmas season, the best gift of all is the gift of less cluttered lives.

The Pope Francis Encyclical And Its Economics
3 replies

Could Obama Be the First Steady-State President?
Scroll to top
$