From the little Fauquier Times Democrat, serving a rural county in northern Virginia, to the ABC Nightly News, we keep hearing the opinions of rednecks, news anchors, CEOs and statesmen that the radioactivity coming from the Fukushima nuclear plant  is “nothing to worry about.”  It’s way below this or that government-sanctioned maximum allowable level, so that proves it’s no problem.  That tiny bit of radioactivity recently detected in Seattle’s milk supply?  Nothing worse than an extra shot of Starbucks.

Maybe, hopefully, they’re right.  But one thing is for sure.  The malfunctioning at the nuclear plant is but one of the bites out of life stemming from the human failure to recognize, much less plan for, the high price and growing risks of economic growth.

Take today’s Chicago Tribune, which I ironically read from the nuclear bowls of Argonne National Labs (that’s another story).  Page 26 tells us with back-to-back headlines that today in Japan, “Concrete fails to plug leak at nuclear plant” and “Debris mountains pose new dilemmas.”  In a nutshell, “highly radioactive water” is leaking into the ocean and the Japanese are wrestling with debris ranging “from 80 million to 200 million tons,” respectively.

I should add that nothing here is intended to impugn the Japanese, who need nothing at the moment if not a break.  And truly, they were no more prone to gamble with Planet Earth than the many other countries with overgrown industrial economies.  Recently they have demonstrated some degree of acceptance of limits to growth, dealing stoically with a stable and therefore aging population.  But on a planet hooked on growth, we’ve all been suckered into packing our shorelines full of capital, infrastructure, and wastes.

The fact that the contaminated water from the Fukushima Dai-Ichi plant is pouring out into the vastness of the Pacific Ocean leads our brave new world order to think it is harmless.  Yet we’re getting no reliable reports of whether this new marine contaminant is primarily iodine-131, nitrogen-16, tritium, or cesium-137.   Each of these are common sources of radiation from malfunctioning nuclear plants, and one of them (cesium-137) has a half-life of 30 years.

If your great grandkids are eating Pacific seafood in the year 2100, more than an eighth (12.5%) of whatever cesium-137 is leaking into the ocean (and spraying into the sky) today will still be emitting carcinogenic beta particles. 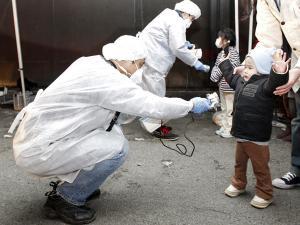 Oh sure, it’s only one nuclear plant.  But that’s the point, it is only one nuclear plant.  Is anyone gullible enough to think this will be the only coastal nuclear disaster between now and those great grandkids?  Then there’s the fact that nuclear power is only one type of energy source.  Remember some of the other ones?  How about petroleum?  Well, it hasn’t even been a year since the BP oil spill devastated one of the world’s great fishery ecosystems.  That’s two bites out of life.  And energy is only one sector.  Imagine what types of ugly surprises could await us in those “debris mountains,” even if they only amount to 80 instead of 200 million tons. Don’t forget, those are only the debris mountains on land.  Imagine how many tons are out there circulating in the slightly (so far) more radioactive Pacific.  Surely another bite out of life.

It’s hardly alarmist to wonder aloud if we might be entering a phase of rapidly increasing “marginal disutility” of growth, whereby each new percent in global GDP brings with it twice the bites out of life as the previous percent.   Is any palliative response conceivable?  To me, but one:  an exponentially growing determination to put an end to the madness of uneconomic growth and to adopt the steady state economy as the appropriate 21st century goal.

Do We Have the Courage to Bring the 800-lb Gorilla out of the Corner?
5 replies