There may well be a better name than “steady state economy,” (SSE) but both the classical economists (especially John Stuart Mill) and the past few decades of discussion, not to mention CASSE’s good work, have given considerable currency to “steady state economy” both as concept and name. Also, both the name and concept of a “steady state” are independently familiar to demographers, population biologists, and physicists. The classical economists used the term “stationary state” but meant by it exactly what we mean by steady state economy—briefly, a constant population and stock of physical wealth. We have added the condition that these stocks should be maintained constant by a low rate entropic throughput, one that is well within the regenerative and assimilative capacities of the ecosystem. Any new name for this idea should be sufficiently better to compensate for losing the advantages of historical continuity and interdisciplinary familiarity. Similarly, SSE conveys the recognition of biophysical constraints and the intention to live within them economically—which is exactly why it can’t help evoking some initial negative reaction in a growth-dominated world. There is an honesty and forthright clarity about the term “steady state economy” that should not be sacrificed to the short-term political appeal of vagueness.

A confusion arises with neoclassical growth economists’ use of the term “steady state growth” to refer to the case where labor and capital grow at the same rate, thus maintaining a constant labor to capital ratio, even though both absolute magnitudes are growing. This should have been called “proportional growth,” or perhaps “steady growth.” The term “steady state growth” is inept because growth is a process, not a state, not even a state of dynamic equilibrium. 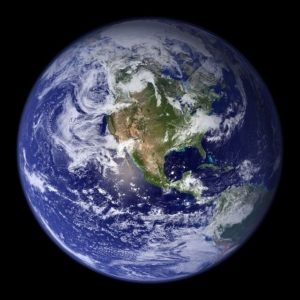 The best method to achieve longevity is to embrace sustainability and a steady state economy. (Image: CC0, Credit: WikiImages).

Having made my terminological preference clear, I should add that there is nothing wrong with other people using various preferred synonyms, as long as we all mean basically the same thing. Steady state, stationary state, dynamic equilibrium, microdynamic-macrostatic economy, development without growth, degrowth, post-growth economy, economy of permanence, “new” economy, and “mature” economy. These are all in use already, including by me at times. I have learned that English usage evolves quite independently of me, although like others I keep trying to “improve” it for both clarity and rhetorical advantage. If some other term catches on and becomes dominant then so be it, as long as it denotes the reality we agree on. Let a thousand synonyms bloom and linguistic natural selection will go to work. Likewise, it is good to remind sister organizations that their favorite term, when actually defined, is usually a close synonym to SSE. If it is not then we have a difference of substance rather than of terminology.

Out of France now comes the “degrowth” (decroissance) movement. This arises from the recognition that the present scale of the economy is too large to be maintained in a steady state—its required throughput exceeds the regenerative and assimilative capacities of the ecosystem of which it is a part. This is almost certainly true. Nevertheless “degrowth,” just like growth, is a temporary process for reaching an optimal or at least sustainable scale that we then should strive to maintain in a steady state.

There is really no conflict between the SSE and “degrowth” since no one advocates negative growth as a permanent process, and no one advocates trying to maintain a steady state at the unsustainable present scale of population and consumption. However, many people do advocate continuing positive growth beyond the present excessive scale, and they are the ones in control and who need to be confronted by a united opposition! 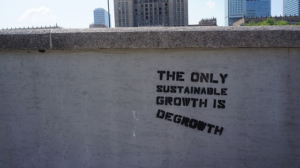 Nicholas Georgescu-Roegen, adopted by the “degrowth” movement as its posthumous founder, indeed recognized that the very long-run growth rate must be negative given the entropy law and the final dissolution of the universe. But he did not advocate speeding up that cosmic result by negative growth as an economic policy, nor for that matter did he in the least advocate a steady-state economy! In fact, he speculated that the destiny of mankind might be to have a short, fiery, and exciting life rather than a long and uneventful one. He did, however, tentatively suggest a “minimal bio-economic program” that would surely reduce growth.[1] In general, he was interested in what is possible more than what is desirable. The question—given the limits of the possible, what is the most desirable policy for mankind?—was not his main focus, although he did not entirely ignore it. The closest he came to explicitly dealing with that question was in the following footnote: Is it not true that mankind’s problem is to economize S (a stock) for as large an amount of life as possible, which implies to minimize sj (a flow) for some “good life”?[2]

In other words, should we not strive to maximize cumulative lives ever to be lived over time by depleting S (terrestrial low-entropy stocks) at an annual rate sj that is low, but sufficient for a “good life?” There is no point in maximizing years lived in misery, so the qualification “for a good life” is important. I have always thought that Georgescu-Roegen should have put that question in bold in the text rather than hiding it in a footnote. True enough, eventually S will be gone and mankind will revert to what he called “a berry-picking economy” until the sun burns out, if not driven to extinction sooner by some other event. But in the meantime, striving for a steady state at a resource use rate sufficient for a good (but not luxurious) life seems to be a worthy goal, a goal of maximizing the cumulative life satisfaction possible under limited total resource constraints. This puts at the very center of economics the questions:

Needless to say, these questions have not been central to modern economics—indeed, not even peripheral!

Georgescu-Roegen did not like the idea of “sustainability” any more than that of a steady state economy because he interpreted both to mean “ecological salvation” or perpetual life for our species on earth—which of course flies in the teeth of the entropy law. And he was right about that. So sustainability should be understood as longevity, not eternal species-life in the sense of perpetuity. Clear scientific thinking about “forever” seems, interestingly, to lead to the religious model of death and resurrection, new creation, and not a perpetual continuation of this creation. Perpetuity in this world is just a glorified perpetual motion machine! To think about forever we must cross from science into theology. But longevity (a long and good life for both individual and species), even if it falls short of forever, or “ecological salvation,” is still a worthy goal both for scientists and theologians, not to mention economists. A steady state economy is arguably the best strategy for achieving longevity—regardless of what we call it.

An Economics Fit for Purpose in a Finite World
8 replies