Editor’s note:  The connotation of utopia has become somewhat negative over time.  Utopians are often labeled as being overly idealistic or impractical.  Yet the very point of formulating policy or running an economy is to strive for a better society – to move in the direction of utopia.  This essay was first published on Smacademia. 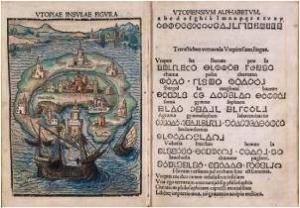 Sir Thomas More’s Utopia was written almost 500 years ago, in the early 16th century.[1] The book has since influenced many a philosopher interested in the concept of Utopia, in theory or in practice. It is an attempt to outline the workings of an ideal state – in this case a small island state in the New World. Written originally in Latin, the book was dangerous in that it directly challenged the authority and wisdom of the ruling Crown – a standpoint that later resulted in the author’s execution by King Henry VIII. As I began to read this book, I was startled by the early realization that this book is nothing short of a 500-year-old vision of a steady state economy. In this article, I will review the book and show the many parallel aspects between the two visions; comparing Utopia with the vision of a steady state economy as outlined recently in the report from the Steady State Economy Conference, Enough is Enough. [2] (The following headings are chapters from the report, followed by comparisons with material in Utopia).

The Utopians are careful not to be wasteful, thereby minimizing their consumption and waste. They live a non-materialistic way of life with a focus on simplicity and quality. For example, “among the Utopians… men very seldom build upon a new piece of ground; and are not only very quick in repairing their houses, but show their foresight in preventing their decay.” [1; pg 36]

Maintaining a stable population was a priority in Utopia. The way they achieved this, however, is only possible in an “empty world” rather than today’s “full world.” Their cities are limited to 6,000 families. [1; pg 37] To aid in maintaining this balance, “they supply cities that do not breed so fast, from others that breed faster; and if there is an increase over the whole island, then they draw out a number of their citizens… and send them over to the neighbouring continent”. In essence, they use fertile colonies where the land has spare capacity to house any excess people. They likewise recall people from the colonies in the event of plague or any other natural disaster that reduces the population. This would not work in the modern world where all spare productive regions of the world are now populated, yet the importance of a stable population is recognized by the Utopians, as it is within a steady state economy.

In Utopia, even their chiefs are barely distinguishable from the general population, and all are considered equal. “There is no man so much raised above the rest of mankind as to be the only favourite of Nature, who, on the contrary, seems to have placed on a level all those that belong to the same species. Upon this they confer that no man ought to seek his own conveniences so eagerly as to prejudice others”. [1; pg 48-49] In a “full world,” excessive wealth for one means taking opportunity from another (e.g., one of the one billion people who are not getting enough food).

In this respect, the Utopians go far further than the proposals of the modern steady state movement. These proposals aim for currencies issued by public institutions and without being created by debt as a loan from a bank. The Utopians live without any currency in an economy along the lines of a resource-based economy as proposed by Jacques Fresco, where resources are distributed freely among the population according to their needs.  There is no debt in Utopia. Furthermore, “since they content themselves with fewer things, it falls out that there is a great abundance of all things among them.” [1; pg 37]

“We who measure all things by money, give rise to many tasks that are both vain and superfluous, and serve only to support riot and luxury.” [1; pg 34] Residents are not particularly concerned with measuring anything in Utopia, for there is little need for it, but this quote from the narrator’s perspective describes the folly and consequence of a poor indicator (GDP was still more than 400 years short of its invention).

In Utopia, they work little, yet almost everyone is employed. “[The chief] is to take care that no man may lie idle… yet they do not wear themselves out with perpetual toil, from morning to night, as if they were beasts of burden…” [1; pg 34] They appoint only six hours for work – sufficient because it is not wasteful. As is proposed within this chapter of the report, they use working time policy to moderate production and maintain full employment. “When no public undertaking is to be performed, the hours of work are lessened. The magistrates never engage the people in unnecessary labour, since the chief end of the constitution is to regulate labour by the necessities of the public, and to allow all the people as much time as is necessary for the improvement of their minds, in which they think the happiness of life consists” [1; pg 37]

In Utopia, most production is done for the community, and is distributed freely to all. It is a society based on cooperation rather than competition, where people support those in need, yet demand an honest contribution from all, achieving this through strong social institutions. This is a vastly different model than our current society. “In all other places… while people talk of a commonwealth, every man only seeks his own wealth.” [1; pg 81]

The Utopians are a peaceful society, yet they are still forced to deal with threats from abroad. They maintain close ties with their neighbors although they do not enter into formal leagues or alliances. “[They] believe that if the common ties of humanity do not knit men together, the faith of any promises will have no great effect.” [1; pg 62-63] The Utopians strive for peace, provide help to neighbors when needed, and require unassailable justification for entering into war. The steady state movement recognizes the importance of international cooperation, including the need for overly consumptive nations to enact reforms and support those nations where people are not consuming enough to meet their needs.

The Utopians are an extremely non-materialistic society, a prerequisite for it to function without scarcity. There are many examples of this shown in the text. “They take care, by all possible means, to render gold and silver of no esteem.” [1; pg 44] “The Utopians wonder how any man should be so much taken with the glaring doubtful lustre of a jewel or a stone, that can look up to a star, or the sun himself; or how any should value himself because his cloth is made of a finer thread… as if he were a thing that belonged to his wealth.” [1; pg 45-46]

There are also many instances where the general principles of sustainability are visible, aside from those described above.  “They define virtue to be living according to Nature” [1; 48].  They shun short term benefits over long term costs, and think to the future: “No pleasure ought to be pursued that should draw a great deal of pain after it… They take great care that… pleasure may never bread pain.” [1; 47] Meeting all the needs of the population, without compromising future welfare is easily achieved.

Certainly some concepts in the book are less applicable and would be less readily accepted today. For example, it was a surprise to find mention of slaves within this egalitarian society, but after reading further, I realized that their slaves are what we call prisoners or criminals. Even in Utopia, some people in society break the laws and customs of the land, and punishments are handed down. In another example, the uniformity of Utopia – of its towns and its people – seems to under- value diversity. “He that knows one of their towns, knows them all, they are so like one another.” [1; pg 30]  And having “no taverns, no alehouses” [1; pg 42] may be hard to swallow for some.

Regardless of the details, it is hard to miss the similarities between Sir Thomas More’s vision of Utopia and modern recommendations for a steady state economy.  The question is whether it is achievable, and beyond this there are questions of whether it can exist without an opposite. Without hate, would there be love? Without sickness, could we feel healthy?  The Utopians could only appreciate their society through observing the follies of their neighbors. Maybe we can only appreciate the hopeful possibilities of a steady state economy once we’ve observed the profound ecological and economic problems of the growth paradigm.  All the same, both Utopia and Enough is Enough provide striking visions for achieving a better future.

Christian Williams is a New Zealander working in Sweden on a master’s degree in sustainable development.  His thesis is about the benefits of a shorter working week, based partly on the need for a new, non-growing economic model.

Logic in the Face of Sea Level Rise
4 replies