The Full Employment Act of 1946 declared full employment to be a major goal of U.S. policy. Economic growth was then seen as the means to attain the end of full employment. Today that relation has been inverted. Economic growth has become the end and if the means to attain that end—automation, off-shoring, excessive immigration—result in unemployment, well that is the price “we” just have to pay for the glorified goal of growth in GDP. If we really want full employment we must reverse this inversion of ends and means. We can serve the goal of full employment by restricting automation, off-shoring, and easy immigration to periods of true domestic labor shortage as indicated by high and rising wages. In addition, full employment can also be served by reducing the length of the working day, week, or year, in exchange for more leisure, rather than more GDP. 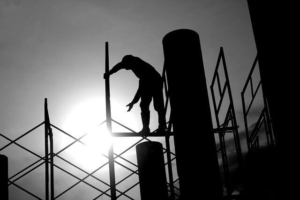 The true motivating factor of corporations is a surplus of labor where wages do not rise and gains from productivity go toward profit. (Image: CC0, Credit: Joko_Narimo).

Real wages have been falling for decades, yet our corporations, hungry for cheaper labor, keep bleating about a labor shortage. What the corporations really want is a surplus of labor. With surplus labor, wages generally do not rise and therefore all the gains from productivity increase will go to profit, not wages. Hence the elitist support for automation, off-shoring, and lax enforcement of democratically enacted immigration laws.

Traditional stimulus policies do little to reduce unemployment for several reasons. First, the jobs that workers would have gone back to have largely been off-shored as employers sought cheap foreign labor. Second, cheap foreign labor by way of illegal immigration seems to have been welcomed by domestic employers trying to fill the remaining jobs at home. Third, jobs have been “outsourced” to automation—to robots in the factory and to the consumer, who is now her own checkout clerk, travel agent, baggage handler, bank teller, gas station attendants, etc. And fourth, quantitative easing has kept interest rates low and bond prices high to the benefit of banks’ balance sheets more than employment. The public benefits from lower mortgage rates but loses more from reduced interest earnings on savings, which does not help employment.

These facts argue for a return to the original intent of the Full Employment Act of 1946—specifically that full employment, not growth, should be the goal. Let us consider four further reasons for this return.

First, off-shoring production and jobs cannot be justified as “trade.” The good whose production has been off-shored is sold in the USA to satisfy the same market that its domestic production used to satisfy. Off-shoring increases U.S. imports and since no product has been exported in exchange, it also increases the U.S. trade deficit. Because the production of goods now takes place abroad, stimulus spending in the USA largely stimulates U.S. imports and employment abroad. Demand for U.S. labor consequently declines, lowering U.S. employment and/or wages. It is absurd that off-shoring should be defended in the name of “free trade.” No goods are traded. The absurdity is compounded by the fact that off-shoring entails moving capital abroad, and international immobility of capital is one of the premises on which the doctrine of comparative advantage rests—and the policy of free trade is based on comparative advantage! If we really believe in comparative advantage and free trade then we must place limits on capital mobility and off-shoring.

Second, for those jobs that have not yet, or cannot easily be off-shored (e.g., services such as bartending, waiting tables, gardening, medical care, etc.), cheap foreign labor has become available via illegal immigration. Many U.S. employers seem to welcome illegal immigrants. Most are good and honest workers, willing to work for little and unable to complain about conditions given their illegal status. What could be better for union busting and driving down wages of the American working class, which, by the way, includes many legal immigrants? The federal government, ever sensitive to the interests of the employing class, has done an obligingly poor job of enforcing our immigration laws.

Third, the automation of factory work, services of bank tellers, and gas station attendants, etc. is usually praised as labor-saving technical progress. To some extent it is that, but it also represents substitution of capital for labor and labor-shifting to the consumer. The consumer does not even get the minimum wage for their extra work, even considering the dubious claim that they enjoy lower prices in return for their self-service. Ordinary human contacts are diminished and commerce becomes more sterile and impersonally digitized. In particular daily interaction between people of different socio-economic classes is reduced. 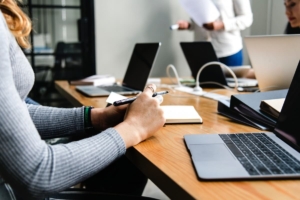 The USA should work toward full employment, not growth, which will ultimately benefit our economy. (Image: CC0, Credit: rawpixel).

Fourth, a “Tobin tax,” a small percentage tax on all stock market, bond market, and foreign exchange transactions would slow down the excessive trading, speculation, and gambling in the Wall Street casino, and at the same time raise a lot of revenue to help close the federal deficit. This could be enacted quickly. In the long run we should move to 100 percent reserve requirements on demand deposits and end the commercial banks’ alchemy of creating money out of nothing and lending it at interest. Every dollar loaned by a bank would be a dollar previously saved by the owner of a time deposit, respecting the classical economic balance between abstinence from consumption and new investment. Most people mistakenly believe that this is how banks work now. Our money supply would move from being mainly interest-bearing debt of private banks to being non-interest-bearing government debt. Money should be a public utility (a unit of account, a store of value, and a medium of exchange), not an instrument by which banks extort unnecessary interest payment from the public—like a private toll booth on a public road.

Cheap labor and funny money policies in the name of “growth and global competitiveness” are class-based and elitist. Even when dressed in the emperor’s fashionable wardrobe of free trade, globalization, open borders, financial innovation, and automation, they remain policies of growth by cheap labor and financial delusion. And we wonder why the U.S. distribution of income has become so unequal? We are constantly told it is because growth is too slow—the single cause of all our problems! That we would be better off if we were richer is a definitional truism. The question is, does further growth in GDP really make us richer, or is it making us poorer by increasing the uncounted costs of growth faster than the measured benefits? That simple question is taboo among economists and politicians, lest we discover that the falling benefits of growth are all going to the top one percent, while the rising costs are “shared” with the poor, the future, and other species.

If It’s Profitable, Is It Really Sustainable?
5 replies