A few weeks ago, air quality at the U.S. embassy in Beijing registered 755 on a scale to 500. A thick, choking haze enveloped the entire city. You couldn’t see from one high-rise office tower to the next; flights were cancelled, some highways were closed, schoolchildren were kept indoors, hospital admissions soared. China’s air quality problems aren’t limited to Beijing — a 2010 study found that air pollution led to 1.2 million premature deaths nationwide — and killer air is just one of the country’s ecological sorrows. One-half of its surface water is so polluted it can’t be treated to make it drinkable, and half of that is so bad it can’t even be used for industrial purposes. Seventy percent of the country’s rivers and lakes receive raw sewage or untreated industrial toxins. Cancer rates are up, and the country has been losing an area the size of Connecticut every year to desertification, brought on by unsustainable farming practices in grassland ecosystems.

In protest, Chinese people have begun taking to the streets in demonstrations that have increasingly become clashes, sometimes bloody, with riot police.

Between 1978 and 2008 the Chinese economy grew tenfold, outpacing the rest of the world. (For comparison: U.S. real GDP tripled in that period.) The growth has come at considerable and notorious cost in contaminated air and water and other “disamenities” — pulmonary disease, cancer, riots.

Are these the necessary costs of development? Of course not. So why is China paying them? As with most real-world questions there is no single answer, but one of the clearest, strongest, and saddest parts of a complete answer is this: China listened to the wrong economists. 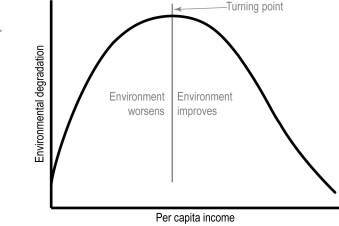 Theorized relationship between pollution and income

Those economists are neither crazy nor blind. They can see the human cost of pollution and environmental degradation. But they’ve got a theory that reassures them the problem is only temporary and will fix itself: the Environmental Kuznets Curve (EKC), which plots a supposed relationship between pollution and income as an upside-down U. Before development, this theory says, pollution levels are low; pollution then increases as economic activity and income both rise; and then, at some tipping point, pollution hits a peak and begins to decline with additional income, as a wealthier population demands and can afford better environmental quality.

This, the standard economics textbooks say, is “intuitively appealing.” And it is — if your intuition has been shaped by traditional economic theory. If ecological damage can always be reversed, and if environmental quality isn’t a God-given gift or a basic human right but a commodity like any other, then it makes sense to think that you can buy a better environment when you get more income. Implication: “Growth is the Key to Protecting the Environment, Not its Enemy,” as one article on the EKC puts it.

This logic leads to an absurd conclusion (always a bad sign for a theory): the reason we have climate change is that the richest countries the planet has ever seen are still not rich enough to afford the environmental good known as “climate stability.” Nor can the EKC be defended on empirical grounds, as good science. The New Palgrave Dictionary of Economics acknowledges that most EKC studies “are designed to yield inverse-U-shaped pollution-income paths, and succeed [in doing so by] using a variety of assumptions and mechanisms” — an approach more consistent with preservation of a faith than with scientific inquiry.

The faith that’s at stake are the dogmas of infinite growth. If pollution doesn’t at some point decrease permanently as income increases, we have to admit that there are ecological limits to economic activity.

While the inverted U of the EKC does describe the relationship between some key pollutants and GDP growth in most developed countries, that finding has fatal conceptual flaws. “Key” pollutants are not all pollutants, and particular pollutants aren’t the sole and permanent marker of ecological degradation. Policies that control one kind of pollutant (and which thereby send its EKC down) may simply encourage a shift to manufacturing processes that produce other kinds of pollutants — ones that aren’t (yet) regulated and haven’t ever been measured, so there’s no possible way to chart their history on an EKC.

Beijing’s gamble with the EKC has become a health hazard (photo credit: AnimaSuri)

Another kind of shift establishes an EKC for a pollutant in one country because the manufacturing process itself moves somewhere else. No EKC study has ever definitively excluded the possibility of this “pollution haven” effect. If exporting a dirty industrial process to a country with little or no regulation is cheaper than meeting regulatory standards at home, why would a profit-maximizing company do anything else?

In the effort to shift an economy’s pollution footprint to another country, the EKC is a big help. It reassures the recipient nation that poisoned air and water are a necessary phase of economic development; that someday it too will be rich enough to restore the environmental quality it once had. What the EKC doesn’t say: ecosystems can be degraded past any hope of repair or reclamation, as many a previous civilization learned the hard way. It doesn’t say: loss of biodiversity is a definitive element of ecosystem degradation, and an EKC for it is a logical impossibility. It doesn’t say: we live on finite planet, and there’s no guarantee that when you want to restore your country’s environmental quality, you’ll be able to find fresh pollution havens willing to accept your economy’s footprint.

Thus, China. In 2005, Pan Yue, then the vice minister of environmental protection, lamented his country’s acceptance of the EKC: “The assumption [was] that the economic growth [we pursued] will give us the financial resources to cope with the crises surrounding the environment, raw materials, and population growth.” Whether China can now reverse the damage and outsource the pollution-dump services that its environment has been asked to provide remains to be seen. One thing is clear: other parts of that country’s ecological footprint are being exported. China is now shopping for farmland in Africa and long-term agricultural leases in South America because its degraded landscape can’t support the human population it holds.

Still, the EKC has its defenders and continues to be treated as a sturdy economic finding — probably because if the EKC isn’t true, then a discipline dedicated to infinite growth will have to face up to the fact that there are limits to what nature can give to us and to what it can absorb from us. Evidence and logic — and the air quality in Beijing — say that yes, there are limits. It’s time for economists to stop seeing the world through the distorting, poisonous haze of an unsupportable theory and to start seeing the world as it is. The fate of our civilization depends on it.

Eric Zencey is a Fellow of the Gund Institute for Ecological Economics at the University of Vermont. He is the author, most recently, of The Other Road to Serfdom and the Path to Sustainable Democracy, from which this essay is drawn.

Happiness and the COVID-caused Recession
6 replies

The Lurking Inconsistency
Scroll to top
$