President Obama is pushing two massive new free trade agreements: the Trans-Atlantic Free Trade Agreement (TAFTA) and the Trans-Pacific Partnership (TPP). These far-reaching agreements, which are being negotiated in secret, constitute major threats to democracy and to the health of the planet and its people. Passage of these new trade deals would make it more difficult than ever to obtain a sustainable, true-cost economy.

Rather than raising all boats, international trade agreements over the past twenty years have encouraged a race to the bottom. If a country has a strong food safety law or a clean energy requirement, you can bet that some corporation is filing or planning to file a trade complaint in a secret tribunal established by a trade agreement.

TAFTA and TPP would give companies the right to file lawsuits against governments in opaque tribunals. The result is likely to be fewer standards against fraud, corruption, and tax dodging, as well as weakened momentum for pollution control, food safety, and clean energy.

Corporate claims of over $14 billion are already pending before three-person trade tribunals that meet in secret to pass judgment on climate and energy policies, medicine patents, and pollution cleanups. Taxpayers have already been forced to pay more than $400 million as a result of trade complaints concerning toxics bans, land-use regulations, timber policies, and other environmental issues.

Texaco’s oil drilling in Ecuador in the 1980s (which was later purchased by Chevron) severely contaminated tribal lands in the Amazon rainforest. The affected peoples filed a lawsuit in New York City, but Chevron had the case moved to Ecuador, under the assumption it would win. In a surprising decision, Chevron lost the lawsuit and even lost an appeal and was ordered to pay $18 billion in damages.

At that point Chevron chose to file a trade complaint in the secret tribunal established by the U.S.-Ecuador free trade agreement. Under this procedure a panel of three (one chosen by Chevron, one by the government of Ecuador, and a third by mutual consent) met in secret and voided the judgment against Chevron.

In 2013 under the Central American Free Trade Agreement, a Canadian gold mining company filed a billion-dollar trade complaint against Costa Rica for denying it a mining permit. Costa Rica was trying to protect a rainforest, but may be forced to pay $1 billion if the secret tribunal rules in favor of the mining company. This case illustrates the way corporations are seeking to undermine the sovereignty of nations trying to protect their long-term environmental and economic interests.

A sustainable economy requires basic reforms designed to prevent tax dodging and reckless speculation with taxpayer dollars. Regrettably, TAFTA and TPP seek to weaken reforms that ensure corporations pay a fair share of taxes. The average U.S. corporation pays roughly 12% of profits in taxes, not the 35% that is on the books. Some companies with billions in profits such as Apple, GE, and Google hide their cash in offshore accounts and pay little or nothing in comparison to their profits.

With the defunding of governments as a result of offshore tax havens, governments worldwide have insufficient funds to enforce pollution laws, protect public lands, or regulate risky hedge fund behavior.

For example, food companies in the European Union have targeted the U.S. Food Safety and Modernization Act of 2011 as a trade barrier. This law gives the Food and Drug Administration the power to recall contaminated food. Remember the meat adulteration scandal of 2013 in which the U.K. was exporting “beef” to the U.S. that was later found to contain horse meat. This sort of scandal could become business as usual if the Act is weakened.

At the same time, the owner of Kentucky Fried Chicken wants to force the E.U. to accept chlorinated chicken. U.S. pork producers also want to eliminate the E.U. ban on ractopamine, a drug used in pork, beef, and chicken production, but this drug has been banned or limited in 160 countries due to risks to human and animal health.

Major food and agribusiness firms are seeking to bring arguments before the trade tribunals to challenge crucial food safety requirements around the globe and to force nations to import foods they have deemed to contain risks.

Passage of TAFTA has the potential to undermine automobile fuel economy standards, energy efficiency labeling programs, and requirements for governments to buy green in procurement contracts.

Tax credits for wind and solar energy could be affected by the agreement. Under E.U. rules, the Swedish Vattenfall company has filed billion-euro trade complaints against Germany’s phase-out of nuclear power and its regulation of coal power plants.

It’s bad enough that the proposed trade agreements risk undermining these three critical policy standards, but the Obama administration is also working to bypass the U.S. Constitution to fast-track the agreements. 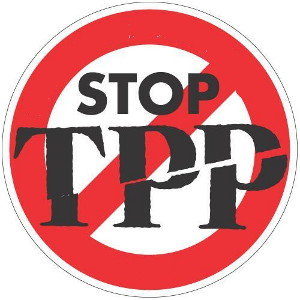 The Constitution provides that Congress, not the Executive Branch, must approve trade agreements. The President is given the authority to negotiate trade agreements but must submit these to the Senate for approval by a two-thirds majority. The Senate can amend proposed treaties negotiated by the President. President Nixon was able to temporarily change the approval process for trade agreements by getting Congress to pass “fast-track” authority that permitted the President to negotiate and sign a trade agreement and then send it to Congress, not as a treaty that requires a two-thirds vote, but as a piece of regular legislation. Under this approach both chambers of Congress stage an expedited debate with no amendments and have an up-or-down by vote on the agreement. Obama is seeking to employ the same Constitutional bypass that Nixon did forty years ago.

TAFTA and TPP are major threats to democracy. They undermine the authority of an open, accessible, and transparent court system. They favor corporate wishes over sound trade, consumer, and environmental policies.

You don’t have to connect very many dots to see the rationale behind the proposed trade agreements. They are meant to prop up economic growth and secure higher corporate profits. As usual, few people (including Obama and his trade advisers) are asking the right questions about the utility of further growth in production or profit.  When it comes to trade, governments ought to be asking:

Considering such questions opens a doorway on the topic of steady state economics and leads to the realization that the economy can get better without growing bigger. Too bad “bigger” seems to be the only option on Obama’s agenda.

Fixing Food and Farming with a True-Cost Economy

Voluntary Simplicity and the Steady-State Economy
Scroll to top
$