On November 15, five nations issued a complaint about a UN initiative called the “Global Green New Deal.”  These nations claim that “nature is seen [by the UN] as ‘capital’ for producing tradable environmental goods and services.”  They express their concern about the “privatization and the mercantilization of nature through the development of markets for environmental services.”   They also declare their “condemnation of unsustainable models of economic growth.”

For the purposes of this week’s Daly News, it matters little who these nations are, nor does it matter if their interpretation of the Green New Deal is completely accurate.  What does matter is that their complaint ripens our attention to a widespread and growing controversy about the implications of valuing ecosystem services.

The primary distinction of ecological economics, in contrast with conventional or “neoclassical” economics, is that ecological economists recognize limits to growth and a fundamental trade-off between economic growth and environmental protection.  The economic pie can only get so big even if all its pieces are correctly priced, including ecosystem services.  Because the economic pie can only get so big, society must also pay greater attention to fairly distributing the pieces.  In order to protect the environment, and to help allocate resources in the fairest manner, it helps to recognize the economic value of ecosystem services.  That’s what ecological microeconomics is all about; estimating the value of natural capital and ecosystem services.

In mainstream economic circles, on the other hand, limits to growth are seen as nonexistent or too far off to worry about.  That leads to a nonchalant attitude about fairness; just grow the economy because a “rising tide lifts all boats.”  Traditional economists don’t mind valuing ecosystem services, however.  As long as the prices are right, and markets are established, ecosystem services can be allocated efficiently, just like steel and milk into guns and butter.

The valuation of ecosystem services provides some common ground for neoclassical and ecological economics.  That should be a good thing.  However, common ground can be a minefield, too.  Many a well-meaning bureaucrat and diplomat are stumbling toward the landmines.

Perhaps the two most common concerns about valuing ecosystem services are:  1)  Many ecosystem services are beyond the ability of humans to estimate the value of, much less to “price” for the market.  “Value of the ozone layer?  Priceless.”  2)  The valuing of ecosystem services begs a market, then monetization of the services such that they are viewed as commodities to be traded like hogs or hoola hoops.  For many cultures this offends the senses of dignity and harmony with the natural world.  “Would you take 40,000 hogs for the climate regulation provided by that forest over there?”

But my concern is with another problem; namely, our inattention to where the money comes from to pay for services such as water filtration, carbon sequestration, pollination, etc.  There seems to be an attitude that, if we just throw enough money at a problem, we’ll solve it.  And that is precisely the attitude that creeps in when ecological microeconomics is not complemented with a healthy dose of ecological macroeconomics.  Markets convey the idea that you can have as much as you want as long as you pay the right price; ecological macroeconomics says the total is limited and the right market price should simply ration the limited total. And if the total is not limited then it is hard for the price to be “right”.

We especially need more awareness of the trophic origins of money.  Money doesn’t grow on trees, but it does come from the ground in a very real sense.  The amount of money available for the purchasing of guns, butter, hogs or carbon sequestration originates from the agricultural and extractive surplus that frees the hands for the division of labor.

In other words, it is not the ozone layer that “generates” money for throwing at its priceless service.  Nor does the North Pole “generate” the money for ecotourists to witness it.  What generates money is activity on the ground – on the farm, in the forest, in the fishery – that gives everyone else their food, as well as the materials for their clothing and shelter.  Everyone else is then free to work in the manufacturing or service sectors.  With plenty of surplus, the economy can even support bankers, actors, and financial engineers who set up markets for trading carbon permits.  That’s the trophic structure of the human economy.

The more our farmers, loggers, and fishermen produce, the more money we’ll all have for the bank, the movies, and trading in biodiversity credits.  But of course the more we ask them to produce, the more environmental impact we’ll have.  If you insist on growing the economy and protecting the environment, eventually the bank and the theatre will be empty; your money’s going straight to the ecosystem services market.  It’s like robbing Peter to pay Paul.

Now consider the other side of the coin, so to speak.  We often hear about the investment in the Catskill Mountains watershed that provides clean water to New York City.  I’m all for it!  But it’s no example of reconciling the conflict between economic growth and environmental protection.  What do the growthers think they’re going to do in that watershed:  open hog farms and build high-rises?  No, by “investing” in that natural capital a decision was made to keep the land relatively free from intensive economic activity.  That’s not the kind of investment they like to hear about in New York City, at least not on Wall Street.

So I’ll stop short of saying, “Let’s encourage all the ecological microeconomics we can get.”  Let’s encourage some of it, while realizing that there are only so many ecological economists to go around.  Let’s encourage far more study and practice of ecological macroeconomics.  With microeconomics, let’s help to demonstrate what’s at stake when we mine an aquifer or pull up a fishery.  But more importantly, let’s not peddle those ecosystem services like they’re rubber boots.  Remember where the money comes from to pay for them: the liquidation of natural capital stocks somewhere else.  That’s ecological macroeconomics, and that leads to a steady state economy where some of those precious ecosystem services stay where they belong: out of the market. 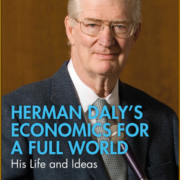 The New Herman Daly Bio: Confusion at a Critical Juncture and Other Missteps

The Kid and the Modern American Growth Scam
7 replies