One reason that we have a culture dedicated to the myth of perpetual economic growth (a dedication that produces a pile of consequences such as climate chaos, financial fiascos, ecosystem eradication, and dismal disparity between the haves and have-nots) is that students are learning fictitious “facts.”  College students in the most common majors are repeatedly told that unlimited economic growth is a good thing, with no thoughtful analysis of the costs of growth.

According to the National Center for Education Statistics, the most popular major for U.S. college students is business.(1)  A whopping 21% of American undergraduates declared business as their major in the 2007-2008 school year.  All of these students take introductory business courses that describe rudimentary principles of economics.  After all, the economy is the environment in which businesses operate, so business students need to understand the economy.  They learn about supply and demand, business cycles, inflation and unemployment.  So when the topic of economic growth comes up in such a course, what sort of message do they receive?

It just so happens that my wife teaches an introductory college business course.  She was kind enough to let me borrow the textbook for her course – Exploring Business by Karen Collins – for a quick review.(2)  I took a look at it with great interest.  Chapter one is called The Foundations of Business, and right at the beginning, I came across a section on economic goals.  In this section, Collins states:

She goes on to explain the concept of prosperity:

For anyone who has studied both the upsides and downsides of economic growth, a statement like, “All the world’s economies have a goal of growth,” raises some red flags.  Follow-up statements that equate prosperity with increased consumption raise even bigger and redder flags.  These assertions can be rewritten as 2 simple (and unsubstantiated) equations:

These equations raise the following questions in my mind:

Exploration of such questions is not a part of the standard curriculum – Exploring Business doesn’t explore any of them.  With so much at stake (after all, a complete understanding of economic growth may help us build economic institutions that fit within ecological capacity), what can we do to help ensure that students obtain a more complete picture of economic growth?  Let’s turn to economics for help.  If we want professors and textbook writers to supply balanced coverage of economic growth, we need to demand it.  We can do so with civility and persistence.  These professors and writers aren’t villains – they are simply passing along knowledge, some of which is dangerously misguided, that was handed down to them.

Adbusters Magazine has launched a campaign called Toxic Textbooks to encourage schools and universities to use economics textbooks that engage honestly with the real world.  You can get involved with that campaign.  You can ask the writers of college textbooks (perhaps starting with Karen Collins) to make some changes.  If you’re taking a course in business or economics, you can certainly ask your professor to explain how we can have infinite growth on a finite planet.  And if these sorts of attempts fail, perhaps students will begin to select majors that are more in touch with what’s happening in the real world. 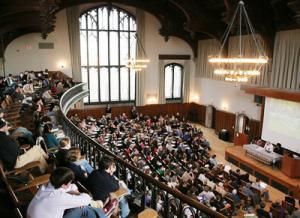 What exactly are we learning here?

(3)   See, for example, Egger, Garry and Boyd Swinburne, 2010.  Planet Obesity: How We’re Eating Ourselves and the Planet to Death, Allen & Unwin.

A Post-COVID Vision: The Full and Sustainable Employment Act
6 replies

Show Me the Evidence: Growth and Prosperity What If We Stopped Fighting for Preservation and Fought Economic Growth Ins...
Scroll to top
$