A funny thing happened on the way to this column. Right when I was ready to accuse Washington Post columnist George Will of building another straw man to tear apart, one of Will’s straw men appeared! It’s as if Will himself cued it up, as I’ll describe in a bit.

Meanwhile don’t get me wrong. Will isn’t right about a lot. He has long been loose with the facts on environmental issues, denying the causes and effects of resource scarcity, pollution, and climate change. His vision of perpetual economic growth is neoclassical naiveté. He displayed it again with “Calls for doomsday remain unheeded.”

Will stubbornly remains a fawning fan of the late perpetual growther Julian Simon. No one likes to criticize the deceased, and Will counts on this and other social conventions to protect himself from critique. (Recently he hid behind society’s respect for Native American tribes to shoot at federal government clean-air efforts.) But it’s not a fair tactic, I’m not falling for it, and Simon was no saint anyway. Simon’s culminating book (The Ultimate Resource 2) was the shoddiest semblance of “scholarship” I’ve ever seen, as I described at length in Shoveling Fuel for a Runaway Train. For Will to stick with Simon after all this time is a red flag over the teeny terrain of his scientific credentials.

Will has even been sucked into the junk-science vortex of Bjorn Lomborg, Simon’s disciple and darling of pro-growth propagandists like the Competitive Enterprise Institute. Will thinks “potential U.S. gas resources have doubled in the last six years,” as if even potential (not just economic) gas resources change with technology! No stranger to bad facts, Will says, “One of [Paul] Ehrlich’s advisers, John Holdren, is President Barack Obama’s science adviser.” In reality it was the other way around: Ehrlich was Holdren’s adviser. In other words Will uses a mistaken claim to unleash a twice-removed, guilt-by-association attack, all in one sentence! 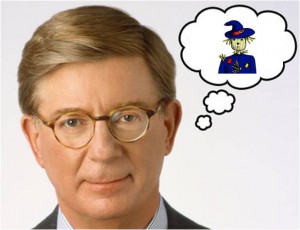 Despite the fact that Will has the combined credibility of Barry Bonds and BP Oil on environmental and sustainability affairs, there are reasons for empathizing with him at times. In fact, one reason plopped in my inbox this morning! The sender, a sustainability activist, first quoted from a website of the Center for the Advancement of the Steady State Economy, “The CASSE position calls for a desirable solution — a steady state economy with stabilized population and consumption — beginning in the wealthiest nations and not with extremist tactics.” Then he went on to complain:

“Unfortunately, there is no ‘desirable solution’ — I wish there were… Industrialism is by its very nature a temporary phenomenon; in the process of perpetuating it we consume the natural resources — primarily finite, non-replenishing, and increasingly scarce NNRs — that enable it. Unfortunately the chickens are coming home to roost now — instead of 1,000 years from now — and there’s nothing that we as a species can or will do about it, except suffer the inevitable consequences.”

So when George Will talks pejoratively about “calls for doomsday,” he’s got that one legitimate point, at least. For someone (a sustainability activist no less) to claim there is no desirable solution to the problem of uneconomic growth is defeatist at best, and patently false besides. Just because a solution — such as a steady state economy running at optimal size — is difficult to achieve does not mean it is out of the question or undesirable. What we should all agree on is that perpetual growth is out of the question, and then strive for the best alternative, handling the growing pains (or in this case, the de-growing pains) along the way.

Next, to paint “industrialism” with such a broad brush that it cannot be sustained, period, is another target on the straw man’s back. We should expect Mr. Will to hit that bulls-eye every time. First of all, de-industrializing is no panacea; it’s easy to envision an unsustainable, non-industrial economy hell-bent on growth. More to the point, who is to say we cannot sustain some industrial capital and production, especially with the use of renewable resources (picture a sawmill running on hydropower), for such a very long time that no one would consider it unsustainable. The problem is perpetual growth — always expanding the capital base and trying to produce more — regardless of the mechanical means by which that growth occurs.

And then, to top it off with, “there’s nothing that we as a species can or will do about it, except suffer the inevitable consequences,” almost makes me wonder who is farther from the truth: Will or the sustainability activist. After all, the activist is either not doing anything “about it” after all, or considers himself too exceptional to be part of the human species. But I don’t, and CASSE doesn’t. We are trying to do something about it. That is, we’re advancing the steady state economy — a desirable solution — instead of sitting on our doomed derrières while lamenting the forces of “industrialism.”

I never thought I’d agree with George Will on a matter of sustainability, but I’ll admit one thing: The caricatures he constructs are not always comprised of straw. Doomsday straw does exist but, unfortunately, some sustainability activists wear it too well.