Farmland LP is a business born from the “uh-oh moment.” The uh-oh moment arrives when you comprehend just how unsustainable modern society has become. Although it can occur as an epiphany, it more commonly comes at the end of a long journey of grappling with grave topics like climate change, poverty, species extinctions, and resource wars. Jason Bradford’s journey wound through college classrooms, South American forests, and California farm fields. With remarkable determination, he turned his uh-oh moment into acres and acres of inspiration.

Bradford is a stocky ball of energy with a quick smile, hearty laugh, and rapid-fire delivery. All three are on display as he discusses his early career. As a graduate student in botany and biology, he assessed tropical ecosystems. He says, “I studied ecosystems in the cloud forests of Costa Rica because they were so cool — I wanted to understand how they fit in the global ecosystem.” He became the go-to guy for the Cunoniaceae family of plants, and his studies propelled him around the world, including a stop in Peru’s Manu National Park to study the effects of climate change on forest diversity.

“Manu is where I got my big uh-oh. I went from being a taxonomist to a team leader, so I had to understand the big picture.” His big-picture role included digesting reports of the Intergovernmental Panel on Climate Change (IPCC). The IPCC conducts assessments that, according to Bradford, take input from one specialty and use it to develop output for another specialty. That output, in turn, becomes a new round of input, and so on. “Climate change predictions start with economic models that estimate future population, resource use, and emissions. With emissions predictions, the climatologists predict temperature changes, and the biologists and agronomists come up with prescriptions.” Bradford detected what he saw as a fatal flaw in this modeling — there was no feedback. The economic models were based on continuously growing consumption, but the storms and emergencies coming from the climate models would, in time, keep the economy from growing. Somehow the modelers had overlooked this critical detail.

“Here I was, a recent Ph.D. at U.C. Davis, and I kept asking, ‘What’s wrong with me? Do I not understand economics?'” Bradford kept digging and unearthing troubling truths. He read the research on limits to growth, studied ecological economics, and concluded that the economic assumptions we live by are pushing us into a terrible trap. His university colleagues avoided the issue. “They would say things like, ‘You’re right, but we can’t do anything about it. Just keep your head down; the implications are too big.'” No one would question the ideology of continuous economic growth. Bradford says, “I understood why it was difficult for people, but I couldn’t erase what I had learned.” His next move demonstrates the determination needed to get out of the trap.

“I could have had a nice career as a professor studying amazing ecosystems, but the cloud forests wouldn’t survive — my research wouldn’t help them. I had to tackle [the problem of] resource overconsumption.” He departed academia and relocated to Willits, California to work on economic relocalization. He started a network of people pursuing a thriving but thrifty local economy. He produced and hosted The Reality Report, a radio program about sustainability. He founded Willits Economic Localization, a nonprofit that served as a template for the Transition Towns movement. That’s a bold and effective response to the uh-oh moment, but it wasn’t enough for Bradford. Not content just talking about the issues, he wanted to create a successful demonstration of economic localization. 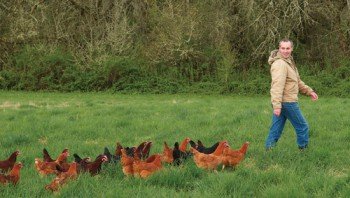 No sector of the economy is more fundamental than food, and Bradford’s background in plants made him a natural for exploring the local food economy. He started an organic vegetable farm and partnered with a nearby school to bring his produce into the cafeteria. Despite his farm’s success, his overactive mind wouldn’t rest. “I had worked so hard on one acre, but what I had accomplished wouldn’t show up on a bar chart. Our produce wasn’t selling in Safeway where most of my neighbors went grocery shopping.” Bradford realized that to make a difference in the food economy, local organic farms needed more support, and that meant access to big money. The stage was set for another move.

Bradford knew he needed to be in a premium agricultural region. Hence the move to Oregon’s Willamette Valley. Based on land prices, proximity to markets, water availability, and the sustainability-literate population, he recognized the city of Corvallis as the perfect place to launch Farmland LP and bolster the local food economy.

For an organization with a world-changing agenda, Farmland LP has a refreshingly simple model that can be explained in five basic statements: (1) Attract money from investors. (2) Buy conventional farmland. (3) Convert the farmland to organic. (4) Sell high-value crops, meats, and seeds in the local economy. (4) Provide a reasonable rate of return to investors. (5) Scale up operations so that healthy lands and healthy foods become the cornerstone of the economy.

In contrast to the model, getting Farmland LP up and running has been anything but simple. Bradford and his business partner Craig Wichner took on considerable personal risk, working without a paycheck or a safety net for years. But their efforts are paying dividends. They have attracted funding not only to buy land, but also to purchase livestock and equipment and hire farmers. In 2011 they had 260 acres. By the end of 2012 they had bought 6,000 more acres, and now both agricultural products and additional investments are flowing more freely.

It can be real stunner when you internalize the uh-oh moment. It’s enough to make you want to dig a hole, climb in, and hide from what you’ve learned. Jason Bradford dug a hole and found not only the root of the problem, but also room to nurture the roots of a solution.

The Kid and the Modern American Growth Scam
5 replies

Fixing Food and Farming with a True-Cost Economy

The Fracking of “The Limits to Growth”
Scroll to top
$