Five years ago, I noted how unsustainable Canadian economic growth is fuelled by debt, which is leveraged to increase the prices–and ‘profitability’–of assets like oil holdings and real estate. It might as well be called “phantom growth,” because it’s bound to disappear in due course. When prices are high, the debt-based Ponzi scheme functions; when prices sustain lows, the scheme unravels. With Canada’s oil and real estate sectors both apparently slowing down, will it lead to a ‘Minsky moment?’

Economist Hyman Minsky studied financial instability as a result of debt accumulation, and his work was largely ignored by mainstream economists. He noted that debt-heavy capitalist economies exhibit inflations and deflations that tend to spin out of control–inflation feeds inflation and deflation feeds deflation. The ‘Minsky moment’ is the moment where our financial system begins to experience deflationary stress due to price shifts. Historically, government interventions to contain debt spirals were not terribly competent, and–other factors notwithstanding–the sheer volume of debt that has been leveraged makes the global economy poised for contraction. Canada’s recent dependence upon asset inflation makes it particularly vulnerable.

Where has all the Money Come From?

Debt has been leveraged in several investment streams, including derivatives, securities, and ordinary debt. After 2008, international quantitative easing–essentially the creation of money from nothing–has partly facilitated further investment in unconventional and costly oil production methods. As long as international prices and investment levels remain high, it is feasible for unconventional oil to achieve a return on the huge amounts of money and energy required to get it out of the ground. But the longer oil prices remain low, the longer investors will be exposed to defaults.

Investors include ordinary folks by virtue of our holdings in pension funds and RRSPs. Laricina Energy has defaulted on financing extended by Canada’s largest pension fund, the public Canadian Pension Plan Investment Board. We can likely expect defaults to international investors as well, which should create upward pressure on interest rates as investors try to cover exposure to losses. 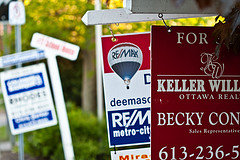 These debt-fueled investments likely won’t come down as smoothly as they went up. Photo Credit: Robert Fairchild

Optimism in the resource extraction industry–despite its disproportionately small role in creating jobs for Canadians–has fostered optimism in other parts of the economy, including real estate. One Canadian commentator remarked that the causes for slowdown in the two sectors are “completely unconnected.” They’re quite well-connected when you notice that in both areas, investors are ‘conservatively’ lending their money to what they think are sure bets, with the expectation of certain returns. In both cases, debt has been leveraged systemically to push prices higher.

Deutshe Bank has proclaimed that Canada is the most overvalued real estate market in the world, by as much as 63%. Canada’s current Bank Governor, Stephen Poloz (who is subject to ‘home country bias’) concedes that the market is overvalued, but by only 30% in his estimate–if only prices were quite so objective! As defaults in other sectors of the economy put upward pressure on interest rates, investment slows. Sure bets become bad bets, and real estate ‘growth’ will evaporate, too.

Debt and the Growth Imperative

Growth–even when it’s illusory or damaging–is an imperative in debt-heavy economies because the economy must expand by at least the rate of interest; if this doesn’t happen, the risk of default is potentially catastrophic. As Richard Douthwaite writes, the choice is between growth and collapse in a debt-based banking system due to the contagion of default–not growth and stability. In order to feed the growth imperative, we’ve normalized the practice of using debt to gamble on unsound high-return investments. In a saner banking system that didn’t require growth at the rate of interest, deflation might be cause for relief among millennials who have been priced out of the real estate market, or among those who have general concerns about the long-term consequences of unconventional oil production.

But in an overgrown lending system that feeds phantom growth, what goes up doesn’t so smoothly come down. After a string of defaults in the unconventional oil sector, credit would tighten, oil prices would react with further unpredictable volatility, and the banking system could require either the kind of government bailout we saw in 2008, or a ‘bail-in,’ where bondholders would cover some of the losses by providing equity for the bank. Canadians have likely forgotten by now that the federal government passed legislation in 2013 that allows banks to take money from bondholders.

Most importunately, unsustainable debt drives the expansion of the physical economy as a self-reinforcing (‘positive’) feedback, despite the fact that we’re pushing up against the planet’s physical limits. Debt is the engine of growth which drives climate change and rapid biodiversity loss.

The Steady State Solution to Overleveraging

It’s insane to require growth just to pay for the invented convention of ‘interest,’ which is at odds with basic physics and the fundamental geochemistry of the planet. But that’s how we roll these days. We celebrate the overexuberant rise in home values, all too willing to count this rise as positive GDP growth. We encourage spending money on products faster than it’s earned, and the debt-backed economy commands us to repeat this inherently unstable practice until the bubbles burst and the financial system collapses.

If we’re staring down the barrel of another inevitable financial crisis due to the fact that instability is built right into the system, why don’t we try doing things a little differently next time? When confronted with another need for a bail-out, rather than “priming the pump” and resurrecting a dead financial system, governments should gradually reduce the ability of banks to leverage so much. Maybe we could even begin to invest in more meaningful things, like small businesses that re-localize and de-carbonize the economy.

As Herman Daly suggests, increasing the fractional reserve requirement would have the effect of reducing risky lending. He writes,

With 100% reserves every dollar loaned to a borrower would be a dollar previously saved by a depositor (and not available to him during the period of the loan), thereby re-establishing the classical balance between abstinence and investment. With credit limited by saving (abstinence from consumption) there will be less lending and borrowing and it will be done more carefully–no more easy credit to finance the massive purchase of “assets” that are nothing but bets on dodgy debts.

By decreasing the potential to ‘leverage’ assets, the relationship between real savings and investment would be restored, and we wouldn’t be encouraging periodic wild swings in the economy and spending money we don’t have on things we don’t need. After all, when confronted with rapid biodiversity loss, climate change, and other serious planet-wide problems, indulging the whims of a risk-prone banking system seems to me an unnecessary distraction, particularly if what goes up doesn’t so smoothly come down.