When The Nature Conservancy decides to talk, the environmental community listens. Even some of Wall Street listens. Despite TNC’s low-key approach, no other conservation organization is remotely close to TNC in political connection and resources. Therefore, one of the most influential environmental books of the year is likely to be Nature’s Fortune by virtue of the fact that the author is none other than TNC’s president, Mark Tercek.

It’s easy to like Mark Tercek, or at least to suspect he is likeable. His preface alone suggests this ex-investment banker from Goldman Sachs has become a passionate conservationist. The criticism to follow has nothing to do with Tercek or the true content of Nature’s Fortune. The problem is that the production of the book and the way it is being portrayed could have the ironic effect of doing more environmental harm than good.

It helps book sales to have a blurb from a past president — “William Jefferson Clinton” in this case — proudly displayed on the front cover. Yet for serious scholars of conservation, the blurb undermines the book like a rash blurting of Rush Limbaugh would undermine serious scholarship on balancing the budget. While a Limbaugh blurb is largely bluff, Clinton’s blurb is largely fluff.

It’s interesting that TNC’s own website for Nature’s Fortune does not include Clinton’s blurb. Evidently there is a tension with regard to the use of Clinton’s name vs. the spurious content of the blurb, which flies in the face of ecological economics and sound science.

One also has to wonder if Clinton really read the book, or simply used the opportunity to roll out one of his most famous win-win shibboleths. For those of us in sustainability science, some of the most reckless rhetoric of the 20th century was Clinton’s fallacious, “There is no conflict between growing the economy and protecting the environment!” If you were paying attention around the turn of the century, you would have heard this zany zinger uttered by one political appointee after another. Word in the DC beltway had it that appointees were instructed to issue this pap when it came to discussions about the environment and the economy.

For appointees on the side of sound science and integrity in public service — and for those with common sense — such political puppeteering must have been odious. But as they say, power corrupts, and appointees uttered the odious awkwardly and often.

So what is the most recent version of Clinton’s win-win happy horsey that disgraces the front cover of Nature’s Fortune? “By breaking conservation down into dollars and cents, Mark Tercek shows that economic growth and environmental sustainability are not mutually exclusive goals. Nature’s Fortune takes a pragmatic approach to an important issue, and turns the conversation from ideology to arithmetic.” Yet Tercek shows no such thing. 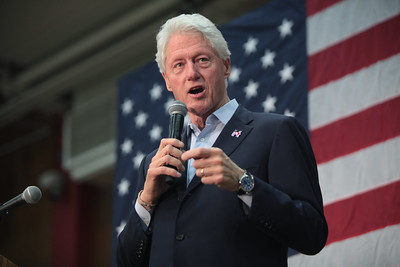 “Economic growth and environmental sustainability are not mutually exclusive goals… but that depends on your definition of ‘environmental’.” (Image CC BY-SA 2.0, Credit: Gage Skidmore)

It’s true that Tercek breaks conservation “down into dollars and cents,” and he does take “a pragmatic approach to an important issue.” He does avoid ideology and he does utilize arithmetic. But no way does Tercek show “that economic growth and environmental sustainability are not mutually exclusive.” In fact, Tercek avoids the phrase economic growth, and certainly doesn’t define the term or describe the process of economic growth. He simply traverses the world, pointing out the essential economic values of natural resources. The fact that corporations, cities, and municipalities are capable of capitalizing on such value gets nowhere near a proof that economic growth may be reconciled with environmental protection.

It’s easy enough to see why politicians and even conservation organizations talk about reconciling economic growth with environmental protection. Economic growth is a long-sought, primary domestic policy goal, partly because it was indeed so appropriate for so much of the 20th-century world when nature wasn’t so scarce. Politicians are still so wedded to economic growth that we can forget about hearing from them about the trade-off between economic growth and competing goals such as environmental protection, long-term economic sustainability, national security, and international stability. Most conservation organizations won’t touch the conflict between growth and conservation with a ten-foot pole, either. TNC is no exception, and in fact would be one of the last organizations to acknowledge the conflict, with its close ties to Wall Street.

But let’s remember (since you won’t find it in Tercek’s book) that economic growth is simply increasing production and consumption of goods and services in the aggregate. It requires increasing human population and/or per capita consumption. It is measured with GDP. It is a rock-solid indicator of environmental impact, and there’s no way to reconcile it with environmental protection. “Green growth” is the oxymoron of the decade; less-brown growth is the best that could happen. Scientific, professional societies have taken the time to clarify this for the public and policy makers. And some of us have written extensively on this topic. We won’t get the imprimatur of Bill Clinton, though, because Clinton is the consummate win-win politician who will go to his grave as such. However, we will set the record straight with support from scientists such as E. O. Wilson, Jane Goodall, and David Suzuki, as well as the likes of common sense and integrity.

Having spent much of the past 14 years writing a book on the fundamental conflict between economic growth and environmental protection, on the heels of Ph.D. research on the subject, I have learned plenty about why and how the win-win rhetoric is promulgated. Books such as Supply Shock and Enough Is Enough should be leading the way in educating the public and policy makers about the real costs and benefits of economic growth. These are serious books by serious scholars of sustainability science. These are books that deal forthrightly with the fundamental conflict between economic growth and environmental protection, and they should be complemented by the likes of Nature’s Fortune, which helps to reinforce the primacy of natural resources in supporting economic activity.

Instead, serious sustainability scholarship in today’s bookstore is supplanted by titles gallivanting with presidential rhetoric that “there is no conflict between growing the economy and protecting the environment!” The win-win rhetoric makes for plenty of bookstore dollars, but only some cynical sense.