Paul Krugman often writes sensibly and cogently about economic policy. But like many economists, he can become incoherent on the subject of growth. Consider his New York Times piece, published earlier this month:

. . . let’s talk for a minute about the overall relationship between economic growth and the environment.

Other things equal, more G.D.P. tends to mean more pollution. What transformed China into the world’s largest emitter of greenhouse gases? Explosive economic growth. But other things don’t have to be equal. There’s no necessary one-to-one relationship between growth and pollution.

People on both the left and the right often fail to understand this point. . . . On the left, you sometimes find environmentalists asserting that to save the planet we must give up on the idea of an ever-growing economy; on the right, you often find assertions that any attempt to limit pollution will have devastating impacts on growth. . . [Krugman says both are wrong]. . . But there’s no reason we can’t become richer while reducing our impact on the environment [emphasis mine].[1] 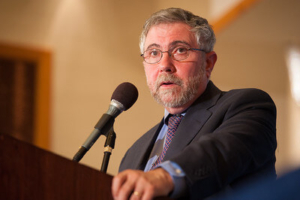 Paul Krugman stands neither with “leftist” environmentalists nor “right-wingers” on our growing economy. So where does he stand on GDP growth? (Image: CC0, Credit: Flickr).

Krugman distances himself from “leftist” environmentalists who say we must give up the idea of an ever-growing economy, and he is apparently unwilling to give it up. But he thinks the “right-wingers” are wrong to believe that protecting the environment will devastate growth. Krugman then advocates the more sensible goal of “becoming richer,” but fails to ask if growth in GDP is any longer really making us richer. He seems to equate, or at least fails to distinguish “growing GDP” from “becoming richer.” Does he assume that because GDP growth did make us richer in yesterday’s empty world it must still do so in today’s full world? The usual but unjustified assumption of many economists is that a growing GDP increases measured wealth by more than it increases unmeasured “illth” (a word coined by John Ruskin to designate the opposite of wealth).

To elaborate, illth is a joint product with wealth. At the current margin, it is likely that the GDP flow component of “bads” adds to the stock of “illth” faster than the GDP flow of goods adds to the stock of wealth. We fail to measure bads and illth because there is no demand for them, consequently no market and no price, so there is no easy measure of negative value. However, what is unmeasured does not for that reason become unreal. It continues to exist, and even grow. Since we do not measure illth, I cannot prove that growth is currently making us poorer, any more than Krugman can prove that it is making us richer. I am just pointing out that his GDP growthism assumes a proposition that, while true in the past, is very doubtful today in the USA.

To see why it is doubtful, just consider a catalog of negative joint products whose value should be measured under the rubric of illth: Climate change from excess carbon in the atmosphere, radioactive wastes and risks of nuclear power plants; biodiversity loss, depleted mines, deforestation, eroded topsoil, dry wells, rivers and aquifers, the dead zone in the Gulf of Mexico, gyres of plastic trash in the oceans, the ozone hole, exhausting and dangerous labor, and the un-repayable debt from trying to push growth in the symbolic financial sector beyond what is possible in the real sector (not to mention military expenditures to maintain access to global resources). 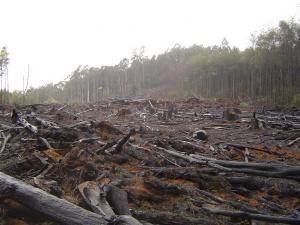 Deforestation—one of the many “illths” created by continual GDP growth. (Image: CC BY 2.0, Credit: crustmania)

Such asymmetric accounting alone is sufficient to refute growthism, but for good measure note that the growthists also neglect the most basic laws of economics, namely, the diminishing marginal benefit of income and increasing marginal cost of production. Why do they think these two curves will never intersect? Is Krugman just advocating temporary growth up to some level of optimality or sufficiency, or an ever-growing economy? If the latter, then either the surface of the earth must grow at a rate approximating the rate of interest, or real GDP must become “angel GDP” with no physical dimension.

Krugman is correct that there is no necessary “one-to-one relationship between growth and pollution.” But there certainly is a very strong positive correlation between real GDP growth and resource throughput (the entropic physical flow that begins with depletion and ends with pollution). Since when do economists dismiss significant correlations just because they are not “one-to-one”?

Probably we could indeed become richer (increase net wealth) while reducing our impact on the environment, as Krugman hopes. But it will be by reducing uneconomic growth (in throughput and its close correlate, GDP) rather than by increasing it. I would be glad if this were what Krugman has in mind, but I doubt that it is.

In any case, it would be good if he would specify whether he thinks current growth in real GDP is still economic in the literal sense that its benefits exceed its costs at the margin. What specifically makes him think this is so? In other words, is GDP growth currently making us richer or poorer, and how do we know?

Since GDP is a conflation of both costly and beneficial activity, should we not separate the cost and benefit items into separate accounts and compare them at the margin, instead of adding them together? How do we know that growth in GDP is a sensible goal if we do not know if the associated benefits are growing more or less rapidly than the associated costs? Mainstream economists, including Krugman, need to free their thinking from dogmatic GDP growthism.

Depletion of Moral Capital as a Limit to Growth

The One Percent: Not Kristallnacht but Lebensraum
Scroll to top
$