Large farms are increasingly dominating crop production in the United States. In the early 1980s, most farms produced crops on less than 600 acres, but the majority of today’s farms grow crops on at least 1,100 acres. And many farms are ten times that size. Furthermore, in 1987 the midpoint dairy herd size was 80 cows; by 2007 it was 570 cows. The change in hogs is even more striking, from 1,200 hogs produced per year to 30,000. This long-term shift in farm size has been accompanied by greater specialization. Beginning in the latter half of the twentieth century, livestock operations were moved to sites away from crops. In 1900 there were dairy cows and hogs on three-fourths of all farms, but in 2005 only one farm in twenty had either dairy cows or hogs. This separation has allowed crop farmers to devote more time and resources to crop production and gradually increase yields and acreages.

Larger crop farms perform better financially, on average, than smaller farms. The difference is mainly in the cost of production. According to a report of the U.S. Department of Agriculture:

Larger farms appear to be able to realize more production per unit of labor and capital. These financial advantages have persisted over time, which suggests that shifts of production to larger crop farms will likely continue in the future.

Research shows that farms with more than 2,000 acres use 2.7 hours of work per acre of corn and pay equipment costs of $432. In contrast, farms with 100 to 249 acres require more than four times as much labor and spend double the amount for equipment.

This scaling-up of farms causes a seldom recognized paradox in agriculture. Increases in farm productivity coincide with periods of poor returns for farmers. The U.S. Secretary of Agriculture, in his 1910 annual report, wrote, “Year after year it has been my privilege to record another prosperous year in agriculture.” What has been called a golden age for American agriculture — the period between 1900 and 1914 — was a period of almost no growth in the sector. Output per worker increased by only one percent between 1900 and 1910, and total farm output by only eight percent. Meanwhile the population increased by a whopping 21 percent. The result was higher food prices and thus the prosperous years.

Conversely in the 1950s, agricultural output increased at a rapid pace as a result of increased productivity. However, the decade is remembered as a time of hardship for most farm families. Input prices went up and farm product prices fell. A million and a half families ultimately gave up farming in this decade as they couldn’t make ends meet. Those that survived were able to buy up the land from those that lost out. A similar period came in the 1980s when productivity grew three percent annually, product prices fell, and input prices and interest rates soared. Willard Cochrane writes, “In terms of agricultural development for the national economy the decade of 1980s was a huge success; in terms of the financial well-being of most farmers it was an economic nightmare.” 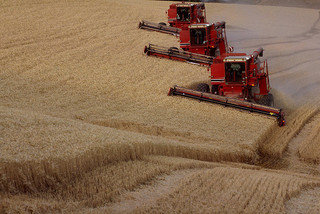 Can the benefits of increasing scale on farms cover the social and environmental costs? (photo credit: T.P. Martins)

Farmers are stuck on a treadmill. Competition forces them to increase productivity, but the increased productivity leads to lower prices and economic hardship for the farmers. This treadmill is the reason for enormous increases in both farm size and productivity. The vanguard farmers adapt, mostly by increasing size, at the expense of their less successful colleagues.

For farmers who can’t compete, there is no way out — or rather there is only one way out — get out! This weeding out of small farms has happened locally and regionally, but the system ultimately works the same way globally, where all farmers compete with each other. Compare, for instance, conditions in Europe to the largest grain-growing areas around the world. For a European farmer, the landscape is varied, and roads, rivulets, hills, and buildings cause fields to be small. Because of land scarcity, land prices are also high and not determined primarily by agricultural productivity. The scale of acreage and machinery can never be as large as on the plains of the United States, Russia, or Argentina. European costs will be higher, even if European farmers can intensify production and get higher yields per acre.

The treadmill is driven by specialization and drives further specialization, filling each farm with just one or two crops or huge livestock operations. The economic and social implications are huge, but the environmental implications are even bigger. Large-scale landscapes get stripped of variation and biodiversity. These lands don’t produce the ecosystem services we need, and we’re left to try producing them elsewhere at high costs, assuming that’s possible.

This large-scale, linear, industrial model of farming has replaced a local, cyclical, and ecological model. The new model has yielded undeniable short-term economic success as measured by financial figures, but unlimited competition will never be sustainable. It’s amazing how running in place on a treadmill can lead us further and further astray.

Gunnar Rundgren has worked in organic farming for more than thirty years. He established the Torfolk farm together with Kari Örjavik, and he is the author of Garden Earth – From Hunter and Gatherer to Global Capitalism and Thereafter.

George Will, Doomsday, and the
Straw-Man Sighting