If we aren’t living in an “educable moment,” then we must be dumber than a doggone boot.  Financial collapse, fiscal crisis, skyrocketing gas prices, global warming, revolutions in crowded countries, unemployment all around… let’s graduate from the College of the 21st Century and recognize the old kindergarten lessons about limits to growth were right after all.  All that stuff they handed us later about perpetually growing the “information economy” was like a loosy-goosy high school course conceived by some ideological school board.  Sometimes it takes a hard-core college course to get back to reality, and now we’re all enrolled whether we like it or not.

We just can’t have a perpetually growing population, perpetually growing consumption, or perpetually growing economy.  To think there is no limit to growth on a finite planet (Earth comes to mind) is equivalent to thinking we could have a stabilized economy on a perpetually diminishing planet.  In other words, we could gradually squish the $70 trillion global economy into one continent, then one nation, then one city… you get the picture.  It’s becoming an “information economy,” right?  So eventually we could squish it into your blackberry, leaving the rest of the planet as a designated wilderness area!

Have you ever heard anything so ludicrous?  Yet it’s precisely, mathematically as ludicrous as thinking we could have a perpetually growing economy on Earth.

So let’s get down to the brass tacks of amending the Full Employment Act before we flunk Sustainability 101.

Of course the other highlight (or lowlight) of the historical context was the Great Depression, during which unemployment not only devastated society, but shocked the pants off neoclassical economists.  Pursuant to an arcane theory called “Say’s Law,” they thought the production of goods would be automatically met with the consumption thereof, so they didn’t believe in a sustained or lengthy period of unemployment.  They didn’t believe in macroeconomic tinkering, either.  Then John Maynard Keynes the Brit changed all that with his General Theory of Employment, Interest, and Money.  They called it the “Keynesian revolution” and that’s how we got into deficit spending to “stimulate the economy.”

Fast-forward to our educable moment of financial collapse, fiscal crisis, skyrocketing gas prices, global warming, endangered species, revolutions in crowded countries, unemployment all around, and we see that we need another kind of economic revolution.  We need a steady state revolution to move from the old, unsustainable goal of economic growth to the new, sustainable goal of a steady state economy.  We need to heed the steady state economics of Herman Daly like we heeded the general theory of Keynes. 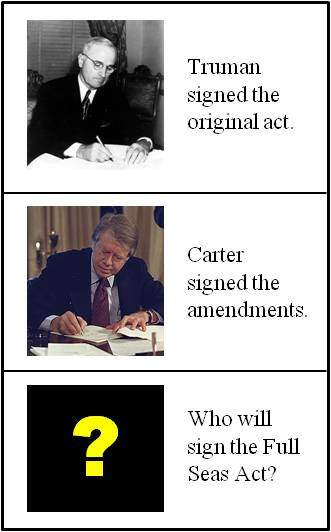 It took 32 years for the original Employment Act to take on the unsustainable baggage of the Full Employment and Balanced Growth Act.  It’s been 32 years since then; time again to retool.  We need to draw up a Full and Sustainable Employment Act, which will have the advantage of a useful acronym, “Full SEA.”  Soon enough it will be known as the “Full Seas Act” to remind us that the “rising tide lifts all boats” metaphor is officially defunct.  There’s no more water to rise the tide, and only so many boats can fit.

The Full Seas Act will clarify that there is a limit to population and economic growth, and therefore a limit to employment.  Within the act, “increased real income” will be amended to “sustainable real income.”  “Balanced growth” will be replaced by “sectoral balance” or “efficient allocation of resources.”  Language will be added to describe that the goal of sustainable, full employment requires stabilization of population and per capita production and consumption.  Pursuant to the goal, the Full Seas Act will establish some commonsense educational programs toward stabilizing population and the ecological footprint of the economy.

The Full Seas Act will also call for an annual Report to the President on Population, Production, Consumption, and Capacity (RPPCC) to help monitor how unsustainable our economy is getting.  With population data from the Census Bureau and production data from the Bureau of Economic Analysis, our slim new Bureau of Population and Consumption (BPC) will be calculating our ecological footprint to determine how sustainable our GDP is.  The President will help us matriculate from the College of the 21st Century by summarizing the RPPCC in the annual state of the union address.

Now some might say, “What planet are you on??”  They think a BPC, an RPPCC, and the Full Seas Act are figments of a futuristic imagination.  Well I’m right here on a finite planet called Earth, feet firmly on the ground and living in an educable moment of financial collapse, fiscal crisis, skyrocketing gas prices, global warming, revolutions in crowded countries, and unemployment all around.

What planet are you on?

Approaching a Steady State Economy, Part 1 — Getting Around
3 replies

Growth of GDP and Discontent in Egypt and Tunisia The Great Energy Rethink: Lessons from Japan and the Neighborhood
Scroll to top
$