On Sunday, February 17, I marched in the largest climate change protest in U.S. history. About 35,000 people gathered on the Washington Monument grounds for a rally and then marched past the White House, calling on President Obama to deny permission for the construction of the Keystone XL pipeline that would transport oil from Canada’s tar sands through the heart of the U.S. to the Gulf Coast.

Two of the victims of tar sands development in Alberta, Chief Jackie Thomas of the Saik’uz First Nation and Crystal Lameman of the Beaver Lake Cree First Nation, spoke of the contamination of their lands and people. Even without the pipeline, the gigantic oil extraction operation is already causing plenty of harm.

If carried to completion during the next several decades, over the objections of the indigenous people who have been stewards of this land, tar sands mining will have transformed an area the size of Florida or Wisconsin. A land teeming with fish and wildlife will have been turned into a grotesque zone of toxicity where the lakes will act as predators as they entice unsuspecting waterfowl to land in their polluted waters.

What kind of economy would find such an activity acceptable? At the very least, the economy must be making some perverse calculations to justify such devastation.

As if the direct devastation of the land and water were not enough, the utilization of tar sands oil by the U.S. and other countries means “game over” for the global climate, according to NASA scientist James Hansen. In other words, the energy-intensive extraction followed by the burning of tar sands oil will put so much carbon pollution into the atmosphere that we will enter an era of radical climate destabilization.

The exploitation is proceeding on Cree lands against their consent and in violation of the Canadian Constitution. It represents a blatant refusal to abide by Article 32 of the U.N. Declaration on the Rights of Indigenous Peoples that says: “States shall consult and cooperate in good faith with the indigenous peoples… in order to obtain their free and informed consent prior to the approval of any project affecting their lands particularly in connection with the development, utilization or exploitation of mineral, water or other resources.”

President Obama appears poised to give permission to build the pipeline and contribute to this industrial nightmare. So what can we do in the aftermath of the big protest?

The time has come to reject the premises of today’s economy, because it is not a true-cost economy, and it undermines good governance. It is an economy set up for cheaters and gamblers. It is also an economy that exploits those lacking political clout and that disrespects international law, except when it comes to trade agreements that enable polluters to enter special secret courts (see the Chevron trade case against Ecuador for one recent example).

A true-cost, sustainable economy would not countenance commercial activities like tar sands mining that are tantamount to an all-out war against the natural environment and a form of industrial genocide. The genocide is underway not because of racial hatred, but because tribal people have stood in the way of a major money-making venture. Furthermore, the indigenous people lacked political power to stop the transnational corporations from ruining their lands. 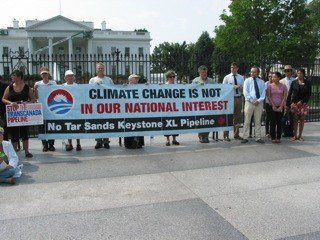 Protests of the Keystone XL pipeline should blossom into protests of our unsustainable economy.

A true-cost economy would exemplify resilience. It would be less susceptible to disruptions from speculation, violent weather events, and terrorism. Such an economy would not pursue activities that generate or are likely to generate irreversible pollution. No one has to worry about a “solar spill” or a “wind spill” ruining their drinking water.

Today’s economy, on the other hand, is permitting all sorts of damaging activities that violate the criterion of reversibility and bequeath a legacy of poison. Consider the contrast between renewable energy projects and coal mining.

If a wind farm or solar rooftop array is causing problems, it can easily be removed without leaving centuries of pollution behind. The roof or the land can be returned to other uses. In fact, wind farms are fully compatible with agricultural production around the wind turbines. One wind farm I visited near Dodge City, Kansas, consisted of 150 turbines in a 20-square-mile area, and the land requirements were just seven acres.

In contrast, coal mining in West Virginia through mountain-top removal is converting biologically diverse, forested mountains into a Martian landscape. In the words of former Congressman Ken Heckler, reclamation amounts to “putting lipstick on a corpse.” Such mining projects violate the principle of reversibility, just like tar sands oil extraction. What will be available to people in the future who want to live in and explore places like West Virginia’s formerly bountiful mountains and valleys?

Whenever concerns are raised over the destructive impacts of big extractive projects, the predicament of joblessness always comes up. But joblessness cannot be solved with the current economic strategy that allows temporary construction jobs to destroy permanent jobs and livelihoods. Big extraction projects cannot create the volume of jobs that can be had by pursuing renewable energy. In fact, the oil industry generates the fewest jobs of almost any industry in the federal government’s database.

It is time to start demanding a true-cost economy that will create diverse jobs without creating no-go zones of carcinogenic and mutagenic wastes.