The response of federal and state governments to sea level rise leaves much to be desired.  That’s because governments are stuck in a business-as-usual, grow-at-all-costs mindset. When the goal of the economy becomes sustainable and equitable well-being, rather than continuous growth, the response will be far more logical and ecologically sound.

The need to address sea level rise is growing more urgent by the day. The Federal Emergency Management Agency (FEMA) estimates that 40 percent of the U.S. population lives in counties that border an ocean or a Great Lake — that’s 120 million people in the U.S. alone who are facing increased risks to their health and property.

Congress created an atrocious model for responding to coastal disasters when it passed the Hurricane Sandy relief measure in 2013. This model conflicts with the beneficial changes Congress had made to fix the bankrupt National Flood Insurance Program (NFIP), which remains $24 billion in the red. This year over 100 Members of Congress are prepared to gut the reforms with a 4-year delay because premiums are going to be too high. J. Robert Hunter, Administrator of the NFIP from 1974 to 1979, aptly characterized the NFIP debacle in a scathing letter to the Senate this January:

Consumers are not well served when the government runs an “insurance” program that is not true insurance, but rather, as the NFIP had become, an unwise and untargeted subsidy program that misleads consumers into putting their homes, businesses, and lives at risk in areas that are dangerously flood-prone and that often unfairly subsidize affluent individuals and contractors who do this building.

True-cost premiums would send a signal of the real and growing risk of building in hazardous coastal zones. Current political and economic practices, however, disguise the true costs and underwrite additional ill-advised construction in the coastal zone.

The U.S. government’s approach to sea level rise is the same as its misguided approach to inland flooding along rivers and streams that began in the early twentieth century: provide loans, grants, and subsidized insurance to build right back in flood-prone areas. Only occasionally has relocation been chosen.

The shocking result, delivered to President Lyndon Johnson by the 1966 Task Force on Federal Flood Control Policy, was that the more federal money spent on river engineering and flood control, the worse the flood damages became. The U.S. is headed for the same debacle with the bailout of coastal properties. The likely result is bankruptcy, given the large rise in sea level expected this century. 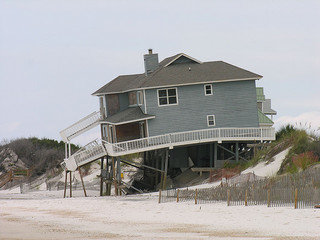 Construction on the coast produces a predictable outcome (photo by Judy Baxter).

If the government could get its economic act together by striving for a steady state rather than the impossibility of perpetual growth, it would take an entirely different approach. Subsidies for buildings in floodplains or along beaches would be eliminated. When inland or coastal flooding destroys structures in these zones, the steady-state response would be to relocate to higher ground away from the shoreline. This approach would not break the bank, but would provide resiliency not only for floodplains and beaches, but also for families and businesses.

Left in their natural condition, floodplains and beaches provide extraordinary benefits in the form of recreation, fish and wildlife habitat, flood control, and spiritual refreshment. Over the last century the massive shoreline build-out has put trillions of dollars at risk while simultaneously degrading the beauty of beaches and destroying natural storm barriers, such as mangrove forests.

There is strong evidence that mangrove forests help protect shorelines against storm surges. Despite the evidence, the World Bank continues to push projects like the Inga 3 hydro-complex that will harm downstream mangroves along the west coast of Africa.

Questions always arise over places like Lower Manhattan which has billions of dollars of buildings. Wealthy businesses and individuals could pay a lot to armor plate this urban zone for a while; however, using this strategy up and down the U.S. coastlines would be way too expensive.

Relocating people, especially in the wake of a disaster, is a difficult thing to do. But what is more humane? Finding a different but safe home for families or setting them up over and over again directly in the path of catastrophe? A true-cost economy would provide a much kinder response by assisting victims of weather disasters and avoiding the repetition of past mistakes.

We would do well to remember that 2,000 years ago Jesus used the analogy of the wise man building his house on the rock and the foolish man erecting his house on the sand. This parable is powerful because the listeners immediately recognized the folly of building on the beach.

Why Stop at Massive Economic Growth when Infinite Growth Is within Reach?
2 replies

Do We Have the Courage to Bring the 800-lb Gorilla out of the Corner?
Scroll to top
$