The Ozark National Scenic Riverways Park in southeastern Missouri was created in 1964 as the first National Park unit to protect a wild and scenic river system. Enclosing 184 miles of river and in many places scarcely wider than the banks of the rivers it protects, the park gets more than a million visitors in the summer, many of them from St. Louis (three hours to the northeast) and Springfield (three hours to the west). The park’s once-pristine waters are being damaged by overuse. Fecal coliform counts have led to the rivers’ being listed as “impaired” — unfit for their historic uses, including swimming, tubing, kayaking, and fishing. Some of the fecal pollution comes from horses (more than 3,000 are stabled in and near the park by trail-ride concessions, and many horse trails cross the rivers) and some comes from private septic failures in cabins, boats and RV campgrounds.

These and other human environmental impacts in the park could be reduced through tighter regulation and judicious redesign of usage patterns — moving trails out of the most sensitive areas, minimizing congestion at access points by separating them farther, that sort of thing. Clearly the park needs an update of its decades-old management plan.

The National Park Service has worked on that update, producing a draft management plan that outlines four possible paths forward, from “no change” — an unsustainable option, Park Service scientists say — to establishing the park as a Wilderness Area. The Service’s preferred option lies in between. It would:

The Park Service has been holding public hearings on the proposals, and some of the hearings have been the occasion of protest and controversy as some park regulars and nearby residents expressed their dismay at the proposed changes. Protest and “push back” are entirely expectable when government policy falls on the border where infinite-planet custom meets finite-planet reality. The transformation of our perpetual-growth society into a steady-state society, though inevitable, is unlikely to be quiet or automatic. It would be less painful if it were eased by environmental journalism worthy of the name, journalism that understands what’s at stake, journalism capable of stepping outside the infinite-planet premises of our social and political system.

Sadly, the new management plan for the Current and Jack Fork Rivers didn’t get that kind of coverage.

On Sunday, January 26, the St. Louis Post-Dispatch ran a front-page story about the new management plan. The prominence was appropriate; the Ozark National Scenic Riverways Park generates plenty of environmental value, as well as substantial local and regional economic impacts. (As a summertime escape from Midwestern heat, it figures prominently in the psychic health of the region too, though that’s harder to measure.) But the implications of the story reach even farther, all the way out to the widest scale possible — that of human civilization in history. That’s because the story of the Park’s need for a new management regime, and of the opposition to that regime, is not simply a story about political wrangling between a federal agency and some citizens affected by its decisions; it’s a story about the troubling collision between participatory democracy and physical reality.

This was not how the story was framed by the paper. Instead, the paper gave it a distinctly conservative spin: long-established users of the park are finding their habits and traditions threatened by unfeeling bureaucrats and flaky environmentalists. The story made a point that those who protested against new park regulations “love” the river, while no mention was made of the love of the river that leads environmentalists to want to see it protected. The only environmentalist the story quoted said the park was a “temple” that had been “desecrated” — as if John Muir’s pantheism was the animating force behind all environmental regulation, and subtly suggesting that the protestors had Constitutional freedom on their side. The story made no mention of fecal coliform counts, noting only that environmentalists “claim” the water is being polluted and quoting one Park Service official who said current uses are “unsustainable.” Absent the science that would back up either statement, a reader could dismiss both as personal opinions. (Indeed, the official was said to “feel,” not think, that the park needed a new regulatory plan.) 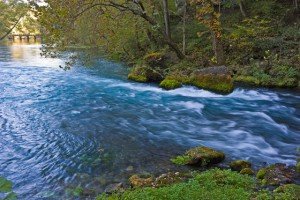 Continuous growth (in visitation to the Ozark Riverways, or more generally in population and consumption) requires regulation to address the consequences. Journalists should be reporting this principle (photo by David Porter).

Infinite-planet bias was present in the story in other ways. The report began within the first-person point of view of one of the citizens opposed to the new regulatory regime, immediately placing the reader on that side of the issue. Imagine if the story had begun with the work of one of the scientists whose findings shaped the report — or a swimmer who had bumped into raw sewage. The story gave a great deal of coverage to citizens worried that they might lose their livelihoods if tourist access to the park comes under greater control, but didn’t make the point that the river-supported economy of the area will collapse completely if the rivers aren’t kept healthy.

Basically, the news story pandered to populist sentiment against regulation. Yes, people don’t like to be told what they can and can’t do, especially when the rules cover behavior in a place that seems wild, natural, and incapable of being damaged by what we do. But looks can be deceiving. As climate change amply demonstrates, we no longer live on a planet so large that it can absorb any- and everything we care to throw at it. In the world we inhabit now, if we want to maintain the benefits and delights we derive from natural ecosystems — including necessities like clean water — we need regulations to manage our increasingly problematic ecological footprint.

Communication of that truth would have served the public interest. The problem is not that some people want more government just for the sake of more government, as a Post-Dispatch reader might justifiably conclude. The problem is that the human population and its high-throughput economy have collided with ecological limit, even in the backwoods of the Ozarks. If protestors want smaller government in general and less regulation of the Ozark Waterways in particular, they need to work to bring civilization back — far back — from the brink of ecological limits. The way to do that is to stabilize and perhaps even reduce population, decrease throughput, and increase the health and security of the planet’s ecosystems through conservation, restoration and preservation.

American political thinkers from Thomas Jefferson to John Dewey have emphasized the importance of newspapers to the country’s democratic project. To their appreciations we can add another of equal importance: only an ecologically knowledgeable electorate can reconcile democracy with non-negotiable ecological limits. If the majority of voters remain ecologically illiterate, they must give up either civilization or democracy; it’s impossible to retain both.

The country could get the educated polity it needs through an ambitious program of teaching ecological literacy in our schools. But for this method to produce an ecologically literate majority would take decades, and we haven’t got that much time. If the American public is to learn what it must learn in order to maintain democracy in the face of the dynamics that are pushing us, inexorably and for our own self-preservation, toward illiberal technocracy, then news outlets have to step up to the task of reporting fairly by dropping their infinite-planet bias. At a minimum they need to report what finite-planet, sustainable thinking has to offer on environmental and economic affairs. Further than that, they could begin connecting their environmental and economic reporting, framing the two as inseparable in every story. And they could emphasize that every story on this combined beat offers evidence of one outstanding practical need: the need to preserve our democracy and promote our well-being through the development of a steady-state society.

Climate Change: The Wrong Top Priority for Environmentalists and Conservation...

Logic in the Face of Sea Level Rise
Scroll to top
$