Part One: The Money-Material Correlation

A hurricane is a dynamic system. Heat, air and water create pocket thunderstorms that come together and gather strength in a powerful spiral effect, destroying whatever isn’t prepared for it on land.

A hurricane is gathering strength in the global economy, as a self-reinforcing spiral of debt, money and materials hurls toward us, with most of us obliviously lying on the beach in our bathing suits and shades on, assuming the calm weather will last indefinitely.

To understand why we’re sitting complacently in the path of an oncoming hurricane, it’s important to recognize the difference between conventional economic wisdom and economic facts. Conventional wisdom suggests that money doesn’t represent a unit of material. Services will take the place of resource extraction industries over time, ‘dematerializing’ the economy by ‘decoupling’ material input from wealth production – eventually improving environmental outcomes. The hope for realizing this ideal is reflected in its number of synonyms, including the value-added, ethereal, knowledge-based and post-industrial economy. You’ve heard them all before.

But this hasn’t really happened in Canada.

What do real estate and oil have in common?

In the 21st century, Canadian economic growth has been rooted in real estate and oil production. Canada has a resource-based economy, even though almost three-quarters of Canadians have jobs in services like real estate, which have little or nothing to do with resources. In fact, only 5-6% of Canadians actually work in the primary sector, where resources are extracted. Yet the country has one of the highest ecological footprints on the planet, partly due to international demand for its oil and minerals.

Over time, the volume of materials that circulates through the Canadian economy hasn’t changed much despite improvements in intensity (material used per unit of income). As a result of this peculiar structure, Canadians have become a nation of extractor-investors, with the remainder of people working in a manufacturing sector centered around transportation equipment, which has been struggling to remain competitive for the last decade.

Services have become a top-heavy trophic layer in the economic structure, with material throughput remaining roughly the same over time despite modest and constant population growth. According to Brian Czech’s trophic theory, the tertiary sector sits atop the secondary sector, which sits atop the primary sector. The three sectors are mutually dependent, imitating the same trophic structure of an ecosystem. Resources flow from one sector to the other in an entropic thermodynamic process, which subjects them to the laws of irreversibility and path-dependence. In other words, material and immaterial economies can’t be considered separate from one another. It’s more like a top-heavy layered cake which, miraculously, doesn’t fall over.

Herman Daly writes that “ecological economics sees this coupling as by no means fixed, but not nearly as flexible as neoclassical believe it to be – in other words, the ‘dematerialization’ of GNP and the ‘information economy’ will not save growth economics” (Daly, 2007). So I tested the idea. I compared materials use (used domestic extraction), with income (gross domestic product) to analyze trends in the Canadian economy over the last quarter century.

And what I found was that – for the data available – the coupling of aggregate materials and aggregate inflation-adjusted income in Canada seems pretty tight. Take a look for yourself: 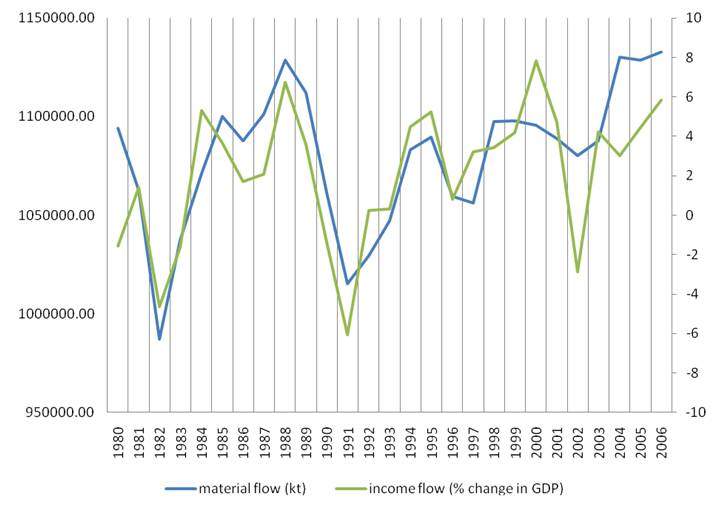 A case of chicken vs. egg?

What does this strong coupling of income and throughput mean? One thing’s for sure: conventional economics doesn’t do a very good job of explaining what’s happening in the Canadian economy. Dematerialization might describe modest intensity gains, but it certainly doesn’t mean ‘decoupling’ or sector substitution the way some economists like to pretend.

When people talk about ‘growth’ in Canada, they really do mean material growth – more stuff – and all the consequent repercussions for large-scale environmental problems associated with high throughput, including climate change, interference with the nitrogen cycle and biodiversity loss. We know from publications like the Stern report that the long-term costs associated with the status quo are unduly high and will eventually force a decline in production due to system feedback.

The second implication is more of a chicken vs. egg question. What drives the trend? Money or stuff? Well that’s complicated. I’m going to go out on a limb and guess that it’s not just money, and it’s not just stuff. It’s a little bit of both, underlined by socio-cultural factors that we can’t put on a tidy graph.

Although we can’t easily isolate what drives the cycle, we can more easily isolate what keeps it from slowing down: debt. Debt is the key component that binds the thunderstorms together into a massive whirling super-storm. The way the finance system is set up, we couldn’t stop the cycle even if we wanted to.

James Johnston has a MPhil in Land Economy from Cambridge University.

BP: Beyond Probablilities From Scream to Dream: the Inspiring Influence of Herman Daly
Scroll to top
$