Wellbeing should be counted in net terms—that is to say, we should consider not only the accumulated stock of wealth but also that of “illth;” and not only the annual flow of goods but also that of “bads.” The fact that we have to stretch English usage to find words like illth and bads with which to name the negative consequences of production that should be subtracted from the positive consequences is indicative of our having ignored the realities for which these words are the necessary names. Bads and illth consist of things like nuclear wastes, the dead zone in the Gulf of Mexico, biodiversity loss, climate change from excess carbon in the atmosphere, depleted mines, eroded topsoil, dry wells, exhausting and dangerous labor, congestion, etc. We are indebted to John Ruskin for the word “illth” and to an anonymous economist, perhaps Kenneth Boulding, for the word “bads.” In the empty world of the past, these concepts and the names for them were not needed because the economy was so small relative to the containing natural world that our production did not incur any significant opportunity cost of displaced nature. We now live in a full world, full of us and our staff, and such costs must be counted and netted out against the benefits of growth. Otherwise, we might end up with extra bads outweighing extra goods, and increases in illth greater than the increases in wealth. What used to be economic growth could become uneconomic growth—that is, growth in production for which marginal costs are greater than marginal benefits, growth that in reality makes us poorer, not richer. No one is against being richer. The question is, does growth any longer really make us richer, or has it started to make us poorer? 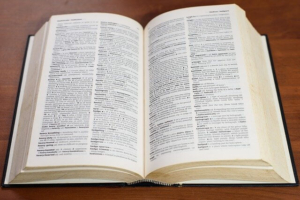 “Illth” and “bads” are words that we’ve stretched our English usage in order to name the negative consequences of production. (Image: CC0, Credit: astize).

I suspect it is now making us poorer, at least in some high-GDP countries, and we have not recognized it. Indeed, how could we when our national accounting measures only “economic activity.” Activity is not separated into costs and benefits. Everything is added in GDP, nothing subtracted. The reason that bads and illth, inevitable joint products with goods and wealth, are not counted, even when no longer negligible in the full world, is that obviously no one wants to buy them, so there is no market for them, and hence no price by which to value them. But it is worse—these bads are real and people are very willing to buy the anti-bads that protect them from the bads. For example, pollution is an unpriced, uncounted bad, but pollution clean-up is an anti-bad that is accounted for as a good. Pollution cleanup has a price, and we willingly pay it up to a point and add it to GDP—but without having subtracted the negative value of the pollution itself that made the clean up necessary. Such asymmetric accounting hides more than it reveals.

In addition to asymmetric accounting of anti-bads, we count natural capital depletion as if it were income, further misleading ourselves. If we cut down all the trees this year, catch all the fish, burn all the oil and coal, etc., then GDP counts all that as this year’s income. But true income is defined as the maximum that a community can consume this year and still produce and consume the same amount next year—maximum production while maintaining the intact future capacity to produce (capital in the broadest sense). Nor is it only depletion of natural capital that is falsely counted as income—failure to maintain and replace depreciation of man-made capital, such as roads and bridges, has the same effect. Much of what we count in GDP is capital consumption and anti-bads. 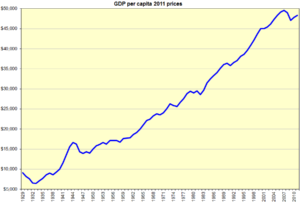 This image depicts the accretion of GDP in the USA Such growth, however, is not measured correctly because it only consists of capital consumption and anti-bads. (Image: CC0, Credit: Frichmon).

As argued above, one reason that growth may be uneconomic is that we discover that its neglected costs are greater than we thought. Another reason is that we discover that the extra benefits of growth are less than we thought. This second reason has been emphasized in the studies of self-evaluated happiness, which show that beyond a threshold annual income of some $20-25 thousand, further growth does not increase happiness. Happiness, beyond this threshold, is overwhelmingly a function of the quality of our relationships in the community by which our very identity is constituted, rather than the number of goods consumed. A relative increase in one’s income still yields extra individual happiness, but aggregate growth is powerless to increase everyone’s relative income. Growth in pursuit of relative income is like an arms race in which one party’s advance cancels that of the other. It is like everyone standing and craning his neck in a football stadium while having no better view than if everyone had remained comfortably seated.

As aggregate growth beyond sufficiency loses its power to increase welfare, it increases its power to produce illth. This is because to maintain the same rate of growth, ever more matter and energy has to be mined and processed through the economy, resulting in more depletion, more waste, and requiring the use of ever more powerful and violent technologies to mine the ever leaner and less accessible deposits. Petroleum from an easily accessible well in east Texas costs less labor and capital to extract, and therefore directly adds less to GDP than petroleum from an inaccessible well a mile under the Gulf of Mexico. The extra labor and capital spent to extract a barrel in the Gulf of Mexico are not a good or addition to wealth—it is more like an anti-bad made necessary by the bad of depletion, the loss of a natural subsidy to the economy. In a full-employment economy, the extra labor and capital going to petroleum extraction would be taken from other sectors, so aggregate real GDP would likely fall. But the petroleum sector would increase its contribution to GDP as nature’s subsidy to it diminished. We would be tempted to regard it as more rather than less productive.

The next time some economist or politician tells you we must do everything we can to grow (in order to fight poverty, win wars, colonize space, cure cancer, whatever…), remind him that when something grows, it gets bigger! Ask him how big he thinks the economy is now, relative to the ecosphere, and how big he thinks it should be. And what makes him think that growth is still causing wealth to increase faster than illth? How does he know that we have not already entered the era of uneconomic growth? And if we have, then is not the solution to poverty to be found in sharing now, rather than in the empty promise of growth in the future? If you get a reasoned, coherent answer, please send it to me!

*Adapted from an article published in Resurgence.