In the Social Limits to Growth, Fred Hirsh argues that morality of the minimum order necessary for the functioning of a market system was assumed, nearly always implicitly, to be a kind of permanent free good, a natural resource of a non-depleting kind.[1]

Elaborating on the relation of Adam Smith’s Theory of Moral Sentiments to his Wealth of Nations, Hirsh points out that for Smith, men could safely be trusted not to harm the community in pursuing their own self-interest not only because of the invisible hand of competition, but also because of built-in restraints on individual behavior derived from shared morals, religion, custom, and education. The problem that Hirsh sees is that continuation of the growth process itself rests on certain preconditions that its own success has jeopardized through its individualistic ethos. Economic growth undermines its social foundations.[2]

The undermining of moral restraint has sources on both the demand and supply sides of the market for commodities. In his essay, “The Growth of Affluence and the Decline of Welfare,” E.J. Mishan has noted that “a society in which ‘anything goes’ is ipso facto, a society in which anything sells.”[3]

A corollary is that self-restraint or abstinence in the interests of any higher claims than immediate gratification by consumption is bad for sales, is therefore bad for production, employment, tax receipts, and everything else. The growth economy cannot grow unless it can sell. The idea that something should not be bought because it is frivolous, degrading, tawdry, or immoral is subversive to the growth imperative. If demand is to be sufficient for continual growth then everything must sell, which requires that “anything goes.” 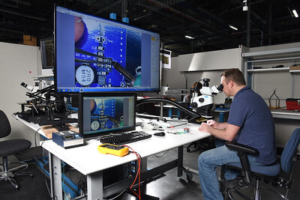 On the supply side, the success of science-based technology has fostered the pseudo-religion of “scientism,” i.e., the elevation of the deterministic, materialistic, mechanistic, and reductionistic research program of science to the status of an ultimate World View. Undeniably, the methodological approach of scientific materialism has led to great increases in our technological prowess. Its practical success argues for its promotion from working hypothesis or research program to World View. But a World View of scientific materialism leaves no room for purpose, for good and evil, for better and worse states of the world. It erodes morality in general and moral restraint in economic life in particular. As power has increased, purpose has shrunk.

The baleful consequence of this fragmenting of the moral order, which we are depleting just as surely as we are wrecking the ecological order, is, as Mishan points out, that effective argument [about policy] becomes impossible if there is no longer a common set of ultimate values or beliefs to which appeal can be made in the endeavor to persuade others.[4]

Just as all research in the physical sciences must dogmatically assume the existence of objective order in the physical world, so must research in the policy sciences dogmatically assume the existence of objective value in the moral world. Policy must be aimed at moving the world toward a better state of affairs or else it is senseless. If “better” and “worse” have no objective meaning, then policy can only be arbitrary and capricious. C.S. Lewis forcefully stated this fundamental truth: “A dogmatic belief in objective value is necessary to the very idea of a rule which is not tyranny or an obedience which is not slavery.”[5]

Likewise, Mishan claims that a moral consensus that is to be enduring and effective is the product of a belief only in its divine origin.[6]

In other words, an enduring ethic must be more than a social convention. It must have some objective, transcendental authority, regardless of whether one calls that authority “God,” or “the Force,” or whatever. All attempts to treat moral value as entirely a part of nature to be manipulated and programmed by psychology or genetics only ends in a logical circularity.

Moral value cannot be reduced to or explained as a mere result of genetic chance and natural selection, without at the same time losing its authority. Even if we knew how to remake moral values as human artifacts, we must still have a criterion for deciding which values should be emphasized and which stifled in the new order. But if that necessary criterion is itself an artifact of humanly manipulated mutation and selection, then it too is a candidate for being remade. There is nowhere to stand.

Once the false belief spreads (and it already has) that morality has no basis other than random chance and natural selection under impermanent environmental conditions, then it will have about as much authority and truth claim as the Easter Bunny. In sum, the attitudes of scientific materialism and cultural relativism actively undercut belief in a transcendental basis for objective value, which in turn undercuts moral consensus. Lacking that consensus, there is no longer the “morality of the minimum order necessary for the functioning of a market system” presupposed by Adam Smith and his followers.

What to Do When You Suspect We’re Headed for Collapse