There are two dogmas that neoclassical economists must never publicly doubt, lest they are defrocked by their professional priesthood: First, that growth in GDP is always good and is the solution to most problems; second, that free international trade is mutually beneficial thanks to the growth-promoting principle of comparative advantage. These two cracked pillars “support” nearly all the policy advice given by mainstream economists to governments. 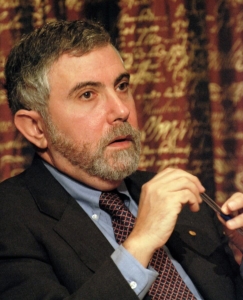 Even such a clear thinker as Paul Krugman never allows his usually admirable New York Times column to question these most sacred of all tenets. And yet, in less than 1,000 words the two dogmas can easily be shown to be wrong by just looking at observable facts and the first principles of classical economics. Pause and calmly consider the following:

(1) Growth in all micro-economic units (firms and households) is subject to the “when to stop rule” of optimization, namely, stop when rising marginal cost equals declining marginal benefit. Why does this not also apply to the growth of the matter-energy throughput that sustains the macro-economy, the aggregate of all firms and households? And since real GDP is the best statistical index we have of aggregate throughput, why does it not roughly hold for growth in GDP? It must be because economists see the economy as the whole system, growing into the void—not as a subsystem of the finite and non-growing ecosphere from which the economy draws resources (depletion) and to which it returns wastes (pollution). When the economy grows in terms of throughput, or real GDP, it gets bigger relative to the ecosystem and displaces ever more vital ecosystem functions. Why do economists assume that it can never be too big, that such aggregate growth can never at the margin result in more illth than wealth? Perhaps illth is invisible because it has no market price. Yet, as a joint product of wealth, illth is everywhere: nuclear wastes, the dead zone in the Gulf of Mexico, gyres of plastic trash in the oceans, the ozone hole, biodiversity loss, climate change from excess carbon in the atmosphere, depleted mines, eroded topsoil, dry wells, exhausting and dangerous labor, exploding debt, etc. Economists claim that the solution to poverty is more growth—without ever asking if growth still makes us richer, as it did back when the world was empty, or if it has begun to make us poorer in a world that is now too full of us and our stuff. This is a threatening question, because if growth has become uneconomic, then the solution to poverty becomes sharing now, not growth in the future. Sharing is now called “class warfare.”

(2) Countries whose growth has pushed their ecological footprint beyond their geographic boundaries into the ecosystems of other countries are urged by mainline economists to continue to do so under the flag of free trade and specialization according to comparative advantage. Let the rest of the world export resources to us and we will pay with exports of capital, patented technology, copyrighted entertainment, and financial services. Comparative advantage guarantees that we will all be better off (and grow more) if everyone specializes in producing and exporting only what they are relatively better at and importing everything else. The logic of comparative advantage is impeccable, given its premises. However, one of its premises is that capital, while mobile within nations, does not flow between nations. But in today’s world, capital is even more mobile between countries than goods, so it is absolute, not a comparative advantage that really governs specialization and trade. Absolute advantage still yields gains from specialization and trade, but they need not be mutual as under comparative advantage—i.e., one country can lose while the other gains. “Free trade” really means “deregulated international commerce”—similar to deregulated finance in justification and effect. Furthermore, specialization, if carried too far, means that trade becomes a necessity. If a country specializes in producing only a few things, then it must trade for everything else. Trade is no longer voluntary. If trade is not voluntary then there is no reason to expect it to be mutually beneficial and another premise of free trade falls. If economists want to keep the world safe for free trade and comparative advantage, they must limit capital mobility internationally; if they want to keep international capital mobility, they must back away from comparative advantage and free trade. Which do they do? Neither. They seem to believe that if free trade in goods is beneficial, then by extension free trade in capital (and other factors) must be even more beneficial. And if voluntary trade is mutually beneficial, then what is the harm in making it obligatory? How does one argue with people who use the conclusion of an argument to deny the argument’s premises? Their illogic is invincible!

Like people who can’t see certain colors, maybe neoclassical economists are just blind to growth-induced illth and to the destruction of the national community by global integration via free trade and free capital mobility. But how can an “empirical science” miss two red elephants in the same room? And how can economic theorists, who make a fetish of advanced mathematics, persist in such elementary logical errors?

If there is something wrong with these criticisms, then some neoclassical colleagues ought to straighten me out. Instead, they lamely avoid the issue with attacks on nameless straw men who supposedly advocate poverty and isolationism. Of course rich is better than poor—the question is, does growth any longer make us richer, or have we passed the optimum scale at which it begins to make us poorer? Of course trade is better than isolation and autarky. But deregulated trade and capital mobility lead away from reasonable interdependence among many separate national economies that mutually benefit from voluntary trade to the stifling specialization of a world economy so tightly integrated by global corporations that trade becomes “an offer you can’t refuse.”

Will standard economists ever pull the plug on brain-dead dogmas?

The Parliamentary Prospects of Steady-State Politics

Could Obama Be the First Steady-State President?
7 replies

Rescuing Obama from the Slippery Slope
Scroll to top
$