I am entirely addicted to watching World Cup soccer. It’s the greatest sporting event on the planet – each match is a high-stakes struggle with international intrigue and unpredictable endings. It’s hard to top the build-up and excitement of a last minute goal that means the difference between going home and moving on to the next round (see the U.S. goal against Slovenia during the group stage). But perhaps the extreme effort from Ghana against the U.S., featuring magnificent runs and fearsome goals, did exactly that. It was amazing to see the Ghana players perform, especially while carrying the hopes of an entire continent on their shoulders (or should I say feet?). Ok, so I’m a fan of the World Cup, but what does that have to do with a steady state economy?

To make the transition to an economy that supports, rather than deteriorates, our one and only home, we need to change some of the things we do. For example, it makes very little sense to continue removing the tops of mountains to extract coal and convert it to electricity and carbon dioxide in a power plant. Surely we can find ways to meet our energy needs that don’t liquidate functioning ecosystems and eons-old geologic structures while simultaneously destabilizing climate.

To have a shot at “changing some of the things we do” requires that we change our individual behaviors. Obviously we can place plenty of blame on the BPs of the corporate world, but corporations are wreaking environmental havoc because individuals, communities, and societies are demanding the products they create. If we can reduce our propensity to consume and use resources more wisely, we will be well on our way to curbing the liquidation of natural capital that comes with economic growth and all its associated consumption.

That’s what living life as a steady stater is about – making choices that meet our needs without compromising the needs of future generations. Steady staters are known for their conservation, thrift and ethics. Some might think that being a steady stater means leading a life of sacrifice and unfulfilled wants, but nothing could be farther from the truth. One’s happiness or satisfaction with life is hardly related to the quantity of material possessions owned, once basic needs for sustenance and convenience have been met. Throughout the world, researchers and citizens are coming to understand and appreciate this fact. It is altogether clear that people don’t need to consume resources wantonly to lead lives of fulfillment – in fact, one of the keys to a life of fulfillment is focusing attention elsewhere (e.g., social connections and relationships). 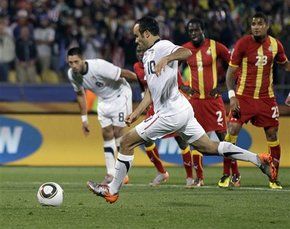 That brings me back to soccer. It’s known around the world as “the beautiful game.” No, it’s not the overly colorful uniforms and creative haircuts on the players that are the origins of that moniker. It’s the tempo, teamwork, and tactics. But it also has to do with the simplicity of the game: eleven players on a side, 2 goals, one ball, and one very easy to understand rule about not using your hands (following the lead of the referees in this World Cup, let’s forget about the offside rule for the time being). Soccer is a low-throughput game. You don’t need much in the way of materials or energy to play a match. That’s also one of the reasons for its global popularity – anyone can play it anywhere. It’s a steady stater sport!

Now let’s contrast the beautiful game with the number two spectator sport in the U.S. – NASCAR auto racing. This “sport” requires massive expenditures of energy and materials as racers roll around (and around and around and around) the track for 4 or 500 miles, strapped into inefficient, CO2-spewing, tire-trashing cars. Setting aside judgment about the merits of watching cars drive in a circle, mostly in anticipation of a life-threatening and auto-obliterating pileup, there is no doubt that a NASCAR race is a consumptive and wasteful enterprise. Adding insult to injury, every inch of space on the cars and the people driving them is covered by advertisements aimed at increasing consumption!

Soccer, NASCAR – what’s the difference? Why make a distinction when they’re both just sports, and there are so many critical problems that we ought to be working to solve? Sports are a big part of many cultures around the world – hence the popularity of the World Cup and the inclusion of sports scores and stories in just about every newspaper. Part of being human is playing games, and doing so may be especially important when we face difficult times. We can all use a little escape from some of the grim realities swirling around us. There are some games, however, that fit within the cultural and economic paradigms of sustainability, and some that don’t. Count me a futbol fan!