You read that right. Pursuant to an act of the 93rd Congress, President Richard M. Nixon signed into law the establishment of a steady state economy. That law was called the “Endangered Species Act.”

Too bad the passenger pigeon didn’t have the “opportunity” to be listed as endangered pursuant to the ESA. It would have been protected and it may have survived, if only on life support. The American economy wouldn’t have left it a lot of room; rather, just enough.

Of course, when the ESA was passed, no one announced it in terms of a steady state economy, for at least three reasons. First, the ESA’s influence on the rate of economic growth would be very gradual as the listing of species prevented a dam here and a power line there. It would have been inaccurate for Nixon to say, for example, “By September 1, 1974, GDP will stabilize.” Establishment of the steady state economy would take decades as dozens, then hundreds, then thousands of species were driven to the brink, then saved in the nick of time through the designation of “critical habitat” and other ESA protections. But make no mistake: With the stroke of Nixon’s pen, the American economy was slated to move toward a balance with the “economy of nature” and all its species, assuming the law was implemented.

The second reason is that few in Congress (if any) actually realized the ESA would lead to a steady state economy. It’s highly unlikely that Nixon did either. If you read the profiles of elected officials in the House, Senate, and President’s Cabinet, you’ll see there was–and still is–virtually no ecological expertise to speak of. Without understanding the economy of nature, and what is required to maintain its natural capital, one cannot grasp the economic relationship between Homo sapiens and the rest of the species. Only in an ecological curriculum, or at least a course in ecological economics, will you learn in no uncertain terms that, “Due to the tremendous breadth of the human niche, the human economy grows at the competitive exclusion of nonhuman species in the aggregate.” Without that knowledge, which is rooted deeply in physics and biology, our politicians are susceptible to whimsical notions of “green growth” and “de-materializing the economy.”

Third, if there were any politicians involved in the passage of the ESA who sensed the implications for economic growth, they wouldn’t have had the courage or integrity to reveal such an inconvenient truth. If we have learned anything from our political leaders–from Nixon to Clinton–it’s the depth to which they’ll drown the truth in order to maintain their positions of power. They also leave the heavy lifting of legislation to be done by future politicians, political appointees, and bureaucrats. Meanwhile the teeth of such legislation are filed down by budget cuts and hostile amendments.

In any event, and whether our politicians knew it or not, the ESA was as sure a prescription for a steady state economy as the American constitution was for a democracy. Think that’s a stretch? Think again. The word “democracy” is nowhere in the constitution. Indeed our founding fathers argued the merits of that newfangled idea. But the principles put forth in the constitution are all about establishing a democratic system of government.

With the ESA, it’s all about establishing a stabilized economy of nature. That doesn’t mean a landscape filled to the brim with bison herds or passenger pigeons, much less snail darters or Wyoming toads. Far from it. What it means, however, is “no species left behind,” even if many of them are perilously perched on flimsy branches of a tree of life top-heavy with human economic activity. What it means, therefore, is a steady state economy with stabilized human population and consumption, at a level pushing the limits of sustainability. That’s what the ESA is ultimately all about, whether or not the phrase “steady state economy” is used therein.

The ESA was too late for many species, and way too late for the passenger pigeon. Now consider a somewhat chilling thought: Does anyone alive today have any idea what we’ve been missing? Let’s get a sense of the magnitude of our ecological debt from the great French-American naturalist John James Audubon:

The multitudes of Wild Pigeons in our woods are astonishing. Indeed, after having viewed them so often, and under so many circumstances, I even now feel inclined to pause, and assure myself that what I am going to relate is fact. Yet I have seen it all, and that too in the company of persons who, like myself, were struck with amazement. In the autumn of 1813… on the banks of the Ohio… I observed the Pigeons flying from north-east to south-west… the birds poured in in countless multitudes… I traveled on, and still met more the farther I proceeded. The air was literally filled with Pigeons; the light of noon-day was obscured as by an eclipse…

In the more evocative style of Aldo Leopold,

The pigeon was a biological storm. He was the lightning that played between two opposing potentials of intolerable intensity: the fat of the land and the oxygen of the air. Yearly the feathered tempest roared up, down and across the continent, sucking up the laden fruits of forest and prairie, burning them in a traveling blast of life.

One could get the uneasy feeling that all the wonder of the Internet would pale under a pulsating sky of passenger pigeons. What would you rather do, surf the web or watch the traveling blast of life?  Yet that’s the type of trade we’ve made, or been subjected to: a constant replacement of the biological with the manufactured, including in the age of the “information economy.” 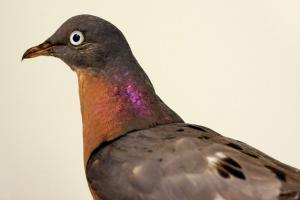 What have we given up, and what are we giving up, to pursue continuous economic growth? Photo Credit: Seabamirum

In the 60 years between the last passenger pigeon and passage of the ESA, GDP grew from well under a trillion dollars to well over five trillion (all in 2014 dollars). To put that in simple ecological terms, millions of acres of wildlife habitats were converted to cities, towns, plant, infrastructure, and landfills. In the countryside, agriculture dramatically intensified, losing its habitat value. Much of the remaining, wilder acreage was polluted to one degree or another with the byproducts of economic activity.

For the most part those trends continue and, as if what’s happened on the ground isn’t enough, today in a 90% fossil-fueled economy we also have relentlessly growing greenhouse gas emissions, despite all the talk of technological progress and green growth. To add insult to injury, politicians continue to tell us that “there is no conflict between growing the economy and protecting the environment,” with political appointees parroting such pap and gagging the scientists who would raise awareness of the conflict. It’s easy to understand why Leopold said, “To be an ecologist is to live in a world of wounds.” The wounds are to the environment, to species, and to human dignity.

Yet that’s what we get when the primary policy goal is economic growth and when so many other laws, policies, and programs are tailored to the pursuit of economic growth. While the language of the ESA is still prescriptive of a steady state economy–perennial efforts to gut it notwithstanding–the ESA has as much chance of implementation as Obamacare would have under Ted Cruz. You won’t see a Tellico Dam being stopped by a snail darter any time soon, whether your president is Obama or Cruz.

Congress and presidents have never been more hell-bent on economic growth. The “Washington Consensus” might as well be the “Wall Street Consensus.” The score is kept in terms of GDP, and the only thing that can change that is a widespread paradigm shift away from economic growth–increasing production and consumption of goods and services in the aggregate–toward the steady state economy.

As the days grow shorter on 2014, with the 41st anniversary of the ESA approaching and the extinction of the passenger pigeon surpassing 100 years, let us commemorate things in the way that matters most for species conservation. Let us recognize the ESA as a prescription for a steady state economy, in balance with the economy of nature and its non-human species. The ESA needs this wedding–a wedding with the truth–before its anniversary can be truly worth celebrating.