As a Protestant Christian, my devotion to the Catholic Church has been rather minimal, based largely on respect for early church history and for the love of an aunt who was a nun. In recent times, the Catholic Church’s opposition to birth control, plus the pedophile and cover-up scandals, further alienated me. Like many others, I first viewed Pope Francis as perhaps a breath of fresh air, but little more. After reading his encyclical on environment and justice, dare I hope that what I considered merely “fresh air” could actually be the wind of Pentecost filling the Church anew with the Spirit? Maybe. At a minimum, Pope Francis has given us a more truthful, informed, and courageous analysis of the environmental and moral crisis than have our secular political leaders.

True, the important question of population was conspicuous by its near absence. In an earlier offhand remark, however, Francis said that Catholics don’t need to breed “like rabbits” and pointed to the Church’s doctrine of responsible parenthood. Perhaps he will follow up on that in a future encyclical. In any case, most lay Catholics have for some time stopped listening to Popes on contraception. The popular attitude is expressed in a cartoon showing an Italian mamma wagging her finger at the Pontiff and saying, “you no playa da game; you no maka da rules.” Discussing population would not have changed realities and would have aroused official opposition and distracted attention from the major points of the encyclical. So I will follow Francis’ political example and put the population question aside, but with a reference to historian John T. Noonan, Jr.’s classic book, Contraception, which sorts out the history of doctrine on this issue.[1]

The big ideas of the encyclical are Creation care and justice, and the failure of our technocratic growth economy to provide either justice or care for Creation. Also discussed was the integration of science and religion as necessary, though different, avenues to truth. And yes, the Pope supports the scientific consensus on the reality of climate change, but, media monomania to the contrary, the encyclical is about far more than that.[2] 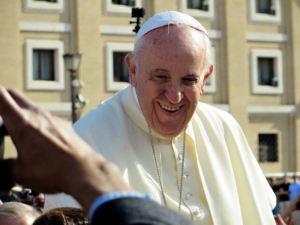 Francis’ voice is of course not the first to come from Christians in defense of Creation. In addition to his ancient namesake from Assisi, Francis also recognized Ecumenical Patriarch Bartholomew of the Eastern Orthodox Church, who has for two decades now been organizing conferences and speaking out in defense of rivers and oceans, including the Black Sea. The Orthodox Church lost a generation of believers to Communistic atheism but is gaining back many young people attracted to the theology of Creation and the actions it inspires. Liberal mainline Protestant Christians, and more recently, conservative Evangelicals, have also found their ecological conscience. So Francis’ encyclical would seem to be a capstone that unifies the main divisions of Christianity on at least the fundamental recognition that we have a shamefully neglected duty to care for the earth out of which we evolved, and to share the earth’s life support more equitably with each other, with the future, and with other creatures. Many atheists also agree, while claiming that their agreement owes nothing to Judeo-Christian tradition. That is historically questionable, but their support is welcome nonetheless.

This theology of Creation should not be confused with the evolution-denying, anti-science views of some Christian biblical literalists (confusingly called “Creationists” rather than “literalists”). Mankind’s duty to care for Creation, through which humans have evolved to reflect at least the faint image of their Creator, conflicts headlong with the current dominant idolatry of growthism and technological Gnosticism. The idea of duty to care for Creation also conflicts with the materialist determinism of neo-Darwinist fundamentalists who see “Creation” as the random result of multiplying infinitesimal probabilities by an infinite number of trials. The policy implication of determinism (even if stochastic) is that purposeful policy is illusory, both practically and morally. Creation care is also incompatible with the big lie that sharing Earth’s limited resources is unnecessary because economic growth will make us all rich. Francis calls this magical thinking. He skates fairly close to the idea of steady state economics, of qualitative development without quantitative growth in scale, although this concept is not specifically considered. Consider this paragraph:

In any event, if in some cases sustainable development were to involve new forms of growth, then in other cases, given the insatiable and irresponsible growth produced over many decades, we need also to think of containing growth by setting some reasonable limits and even retracing our steps before it is too late. We know how unsustainable is the behaviour of those who constantly consume and destroy, while others are not yet able to live in a way worthy of their human dignity. That is why the time has come to accept decreased growth in some parts of the world, in order to provide resources for other places to experience healthy growth.[3]

In the last sentence, “decreased growth” seems an inexact English translation from the Spanish version “decrecimiento,” or the Italian version “decrescita” (likely the original languages of the document), which should be translated as “degrowth” or negative growth, which is, of course, stronger than “decreased growth.”[4]

Laudato Si is already receiving both strong support and resistance. The resistance testifies to the radical nature of Francis’ renewal of the basic doctrine of the Earth and cosmos as God’s Creation. Pope Francis will be known by the enemies this encyclical makes for him and these enemies may well be his strength. So far in the USA, they are not an impressive lot: the Heartland Institute, Jeb Bush, Senator James Inhofe, Rush Limbaugh, Rick Santorum, and others. Unfortunately, they represent billions in special-interest money and have a big corporate media megaphone. The encyclical calls out the opponents and forces them to defend themselves. To give them the benefit of the doubt, they may really think that Francis is rendering to God what actually belongs to Caesar’s oligarchy. But neither Caesar, nor the market, nor technology created us, or the earth that sustains us. Thanks to Francis for making that very clear when so many are denying it, either explicitly or implicitly.

[1] Noonan, J. 1986. Contraception: A History of its Treatment by the Catholic Theologians and Canonists. Belknap Press, Cambridge, MA. Noonan demonstrates the lack of a biblical basis for opposition to contraception as well as the origins of church doctrine in secular Roman law, which was absorbed into canon law. The ancient Roman meaning of the “proletariat” was “the lowest class, poor and exempt from taxes, and useful to the republic mainly for the procreation of children.” Clearly contraception was not indicated for them, although tolerated for patricians. This literal meaning of the proletariat as the prolific class was lost when Marx redefined the word to mean “non-owners of the means of production.” But the Malthusian connection with overpopulation and cheap labor has remained real, even if downplayed by Marxists as well as Catholics.

[4] Thanks to Joan Martinez-Alier for pointing this out.

An Open Letter to Peter Kent, Canada’s Minister of the Environment