If you’re an American or just familiar with the American scene, you know what’s brewing. We’re not talking about the inauguration, sequestration, or Secretary of State nomination. No, something much bigger. We’re into the NFL playoffs and the biggest sporting event in the world is right around the corner: the Super Bowl!

I suppose those rabid European soccer fans would argue that the World Cup beats all, and in my ignorance of worldwide sports I’m probably missing a few rivals from other continents. Bully for them, but surely no other sporting event attracts the media coverage, the movie stars, and the tag lines of the Super Bowl, where the highest-paid athletes in the world compete to hoist the Lombardi Trophy.

As a kid growing up on the edge of Green Bay, Wisconsin, I was engrained with a culture defined by its professional football team, the Packers. Born in 1960, my first decade was spent while Coach Vince Lombardi’s Packers put their indelible stamp on American sports. Tiny Green Bay, the David among NFL Goliaths like the New York Giants and Chicago Bears, won an unprecedented five NFL championships in one decade, culminating with their dramatic victory in the “Ice Bowl.” On the frozen tundra of Lambeau Field, with the temperature plunging to -20°F, good ol’ Bart Starr snuck it in on the Dallas Cowboys with 15 seconds left.

Wouldn’t you know, I didn’t get interested in this stuff until the year after the Ice Bowl. At the football-fanaticizing age of 8, I was ready to add my voice to the collective howl of “Go Pack!” But the Pack wasn’t going anywhere except the loser column for the next 20 years.

Meanwhile television was spreading like the flu through the American household. Coverage of the NFL became the state of the art. Epic clashes were replayed in slow-motion, narrated by the best voices Hollywood had to offer, accompanied by orchestrated, adrenaline-pumping brass music.

Unknown to the NFL, during those same years books like The Limits to Growth, Small Is Beautiful, and Steady-State Economics appeared. My own research ended up focusing on the conflict between economic growth and biodiversity conservation. I got my Ph.D. in 1997, the year the Packers finally won another Super Bowl.

My interest in the Packers was rekindled, but I never started wearing a cheesehead. In fact, I hardly even mentioned the Packers in public. Instead, I became a closet football fan, and these are my confessions.

First, to my cultural kin back in the home state, as well as the general Wisconsin Diaspora, my confession is… well you read it above. I’m reduced to an abashed Packer fan, which is practically an oxymoron. But it’s not because of the embarrassment of the cheesehead phenomenon. And, I swear, it has nothing to do with the fact of the Packers being soundly defeated in this year’s playoffs (just last night, uncannily)! This piece has been on my mind for some time.

Now there’s nothing wrong with the sport of football, not in my opinion. The problem is the commercialization, industrialization, and non-stop growth of football. The NFL has a huge and growing ecological footprint. Players are routinely paid in the millions, and many drive Hummers and build mansions. Scouts, agents, and football reporters spend more time in the air than Hilary Clinton. And the owners; let’s not even get started on the owners!

We have to remember that the expenditure of a dollar is a solid measure of environmental impact, and the NFL sector exceeds the budgets of half the nations on the planet, the Environmental Protection Agency, and a bazillion school teachers. That’s why you won’t see me hollering “Go Pack.” I don’t want to be seen as supporting things like the Lambeau Field Atrium, which takes approximately 30 million dollars a year of air conditioning, much less the $1.4-billion Cowboys Stadium or the $1.7-billion Metlife Stadium. After all, I’m the same guy who called for an end to conspicuous consumption in Shoveling Fuel for a Runaway Train: Errant Economists, Shameful Spenders, and a Plan to Stop Them All. I don’t want to be the shameful spender and a hypocrite to boot.

Well, I said “confessions” (plural) so here is the other one. This one is even more difficult, but I write on a Sunday and what better time to confess? So… (gulp)… I confess that, albeit in the closet, I have been watching football. Quite a bit this year, in fact. And I don’t mean just a high school game here and there. In fact I don’t mean any of those, but rather full-bore NFL.

Yes, it feels hypocritical, but I can rationalize it ’til the cows come home. To wit:

I better stop there, before I burst from the confessional blurting “Go Pack!” But no, if you’re reading this, I’ve gone ahead and confessed, and perhaps you’re reading an epiphany as much as a confession. 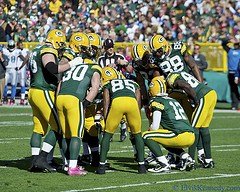 Even a community-owned team huddles around the strategy of growth (photo credit: Elvis Kennedy)

Like many fellow fans, my habit may have started innocently, going to Lombardi Junior High, playing a bit of football (not very well either), selling coke at the Packer games, cheering on the Pack through thick and thin. But things have changed. More than me or any fan or any player, the world has changed and the NFL has changed. This isn’t the days of the Ice Bowl when folks wore their ice-fishing coveralls to the game and the players went back to work in a regular job during the off-season. No, the NFL has gotten way unsustainable, maybe not as much as with NASCAR, but way unsustainable nonetheless, and growing with no end in sight or in mind. Although the NFL has a salary cap, the NFL as a whole is rabidly pro-growth, constantly seeking expansion of teams, stadiums, and schedules.

The culture of professional sports illuminates a major challenge to achieving a steady state economy, namely the soul-searching task of curbing one’s own appetite for unnecessary or over-the-top goods and services. In this case we have an entertainment service that for many has deep cultural roots and may even invoke primal instincts to fight and to win. Perhaps the only way to curb such an appetite is to dwell for awhile on the fact that the level of unnecessary consumption associated with a perpetually growing NFL, NBA, MLB, NHL, and worst of all NASCAR no longer fits in the days of endangered species, climate change, and economic meltdown. The only way a professional sports league will fit, going forward, is with limits to its growth, all in the context of a steady state economy.

Limiting the growth of professional sports won’t happen if the owners and leagues can help it. This has to come from the consumer side of the ledger, perhaps with the help of some steady statesmanship. I remember writing a letter, published from afar in USA Today, exhorting Packer fans in Brown County to vote “no” on the Lambeau Field Atrium due to the gaudy air-conditioning bill and environmental impact. I must have seemed like a Martian to the cheeseheads. Winning that vote would have taken more leadership from state and county officials – that’s what I mean by steady statesmanship.

But for now it’s mostly up to us fans. We can’t keep letting the lure of these professional sports turn us into drunken fools at the Coliseum, fiddling while Rome burns. We’re the consumers, and if we watch fewer games the sports leagues will have to stop bloating.

I’ll do my penance in 2013. I’m taking the year off of professional football watching, Super Bowl and all. I have more important, fulfilling, and even enjoyable things to do Sundays.